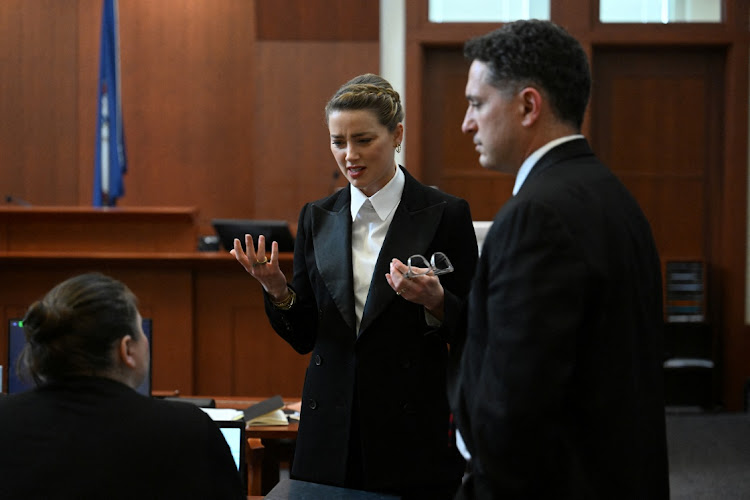 Amber Heard speaks to her lawyer in the Fairfax County circuit court during the defamation case against her by Johnny Depp, her ex-husband.
Image: Jim Watson/Pool via Reuters

Amber Heard, the ex-wife of Johnny Depp, may testify on Wednesday in front of a Virginia jury that is hearing the multimillion dollar defamation claims the actors filed against each other after their short-lived marriage.

On Tuesday, Depp’s attorneys rested their case after arguing Heard libelled the Pirates of the Caribbean star when she claimed she was a victim of domestic abuse.

Heard’s side began their response by calling to the stand a psychologist who said the actress suffered from post-traumatic stress disorder due to physical and sexual abuse by Depp.

During four days of sworn testimony, Depp said Aquaman star Heard was the abuser in the relationship and once threw a vodka bottle that severed the top of his right middle finger.

Attorneys for Amber Heard on Monday showed a jury critical news articles that they said damaged her ex-husband Johnny Depp's career well before the ...
Lifestyle
3 weeks ago

Heard has denied injuring Depp’s finger and said she only threw things to escape when he was beating her.

“Let’s drown her before we burn her,” he said in one text message to actor Paul Bettany, adding “I will f**k her burnt corpse afterward to make sure she is dead”.

The case hinges on a December 2018 opinion piece in the Washington Post. The article never mentioned Depp by name, but his lawyer told jurors it was clear Heard was referencing him. The couple’s divorce was finalised in 2017 after less than two years of marriage.

Depp, once among the biggest stars in Hollywood, said he never struck Heard or any woman and Heard’s allegations had cost him “everything.”

A new Pirates movie was put on hold, and Depp was replaced in the Fantastic Beasts film franchise, a Harry Potter spin-off.

Heard’s attorneys have argued she told the truth and her opinion was protected free speech under the US constitution's First Amendment.

A state court judge in Fairfax County, Virginia, is overseeing the trial, which is expected to last until late May.

Less than two years ago, Depp lost a libel case against The Sun, a British tabloid that labelled him a “wife beater”. A London high court judge ruled he had repeatedly assaulted Heard.

Depp’s lawyers have said they filed the US case in Fairfax County, outside the nation's capital, because the Washington Post is printed there. The newspaper is not a defendant.

Week two of Hollywood star Johnny Depp’s defamation case against his ex-wife Amber Heard was filled with more drama, shocking allegations and a ...
Lifestyle
1 month ago

Actor Johnny Depp testified on Tuesday that he never struck his ex-wife Amber Heard and was challenging her accusations in a $50m defamation case in ...
Lifestyle
1 month ago

Lawyers for actor Johnny Depp on Tuesday gave a jury an overview of his US defamation case against his ex-wife Amber Heard, the latest chapter in a ...
Lifestyle
1 month ago