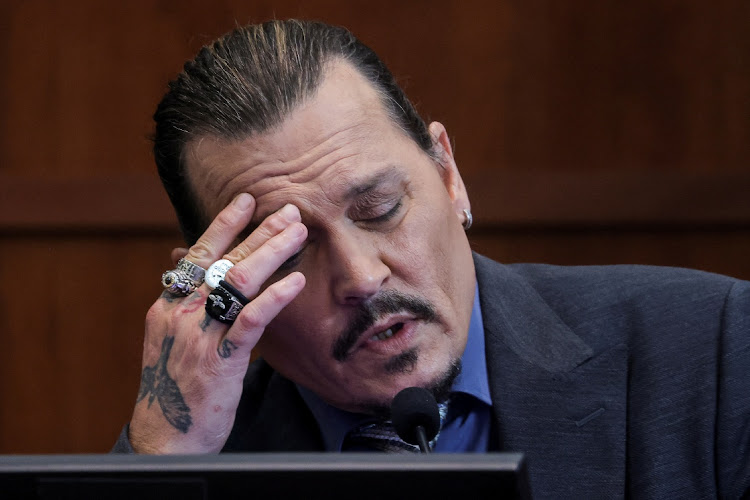 Actor Johnny Depp reacts as he testifies in the courtroom during his defamation trial against his ex-wife Amber Heard.
Image: Evelyn Hockstein/pool via Reuters

Actor Johnny Depp returned to the witness box on Wednesday to refute ex-wife Amber Heard's testimony in their defamation battle, saying the abuse claims she levelled against him were “unimaginably brutal, cruel and false”.

The Pirates of the Caribbean star, 58, sued Heard for $50m and argued she defamed him when she called herself “a public figure representing domestic abuse”. Heard, 36, has countersued for $100m, saying Depp smeared her when his lawyer said her accusations were a “hoax”.

On Wednesday, Depp and his attorneys worked to rebut Heard's testimony that he physically and sexually abused her multiple times before and during their marriage, which ended in 2017.

Depp offered a string of adjectives to describe his reaction to Heard's accounts during the trial, now in its sixth and final week.

“No human being is perfect” he said. “But I have never in my life committed sexual battery, physical abuse.”

Heard's lawyers will no longer call her ex-husband back to the stand ahead of closing arguments.
Lifestyle
2 months ago

In earlier testimony, Depp told jurors it was Heard who turned violent in their relationship. Closing arguments in the trial being held in Virginia are scheduled for Friday.

“No matter what happens,” Depp said, “I did get here and I did tell the truth and I have spoken up for what I’ve been carrying on my back, reluctantly, for six years.”

In cross-examination, Heard's attorneys confronted Depp with text messages retrieved from his cellphone. One message to an assistant described a woman's genitals as being “RIGHTFULLY MINE”.

Depp denied he wrote the texts and said his phone might have been used by someone else or the message was altered.

Earlier on Wednesday, British model Kate Moss appeared briefly and disputed Heard's claim about “rumours” of an altercation involving a staircase when Moss dated Depp in the 1990s.

Moss said she slipped on the staircase and injured her back during a vacation the couple took in Jamaica. Depp rushed to help her, carried her to her room and summoned medical services, she said.

“He never pushed me, kicked me or threw me down any stairs,” said Moss, who appeared via video from England.

The incident became an issue when Heard testified she once slapped Depp because she thought he was about to shove her sister down a flight of stairs, as she thought he did with Moss.

Heard, best known for her role in Aquaman, met Depp in 2011 while filming The Rum Diary and the pair wed in February 2015. Their divorce was finalised about two years later.

At the centre of the legal case is a December 2018 opinion piece by Heard in the Washington Post. The article never mentioned Depp by name, but his lawyer told jurors it was clear that Heard was referring to him.

Depp, once among Hollywood's biggest stars, said Heard's allegations cost him “everything”. A new “Pirates” movie was put on hold, and Depp was replaced in the Fantastic Beasts film franchise, a Harry Potter spin-off.

Heard's attorneys have argued that she told the truth and her opinion was protected free speech under the US Constitution's First Amendment.

Depp lost a libel case less than two years ago against the Sun, a British tabloid that labelled him a “wife beater”. A London high court judge ruled he had repeatedly assaulted Heard.

Depp's lawyers filed the US case in Fairfax County, Virginia, because the Washington Post is printed there. The newspaper is not a defendant.

Amber Heard has denied accusations that she assaulted former husband Johnny Depp or any of her ex partners as Depp's legal team concluded its ...
Lifestyle
2 months ago

Attorneys for Amber Heard on Monday showed a jury critical news articles that they said damaged her ex-husband Johnny Depp's career well before the ...
Lifestyle
3 months ago

Actor Johnny Depp testified on Tuesday that he never struck his ex-wife Amber Heard and was challenging her accusations in a $50m defamation case in ...
Lifestyle
3 months ago