Déjà Vu, Ancestors and Dreams: Five art events not to miss in June

This month, catch an online catalogue of African art, stories of survival at Constitution Hill, new work from Neo Matloga, a tribute to Robert Hodgins and an extensive auction of Irma Stern’s works 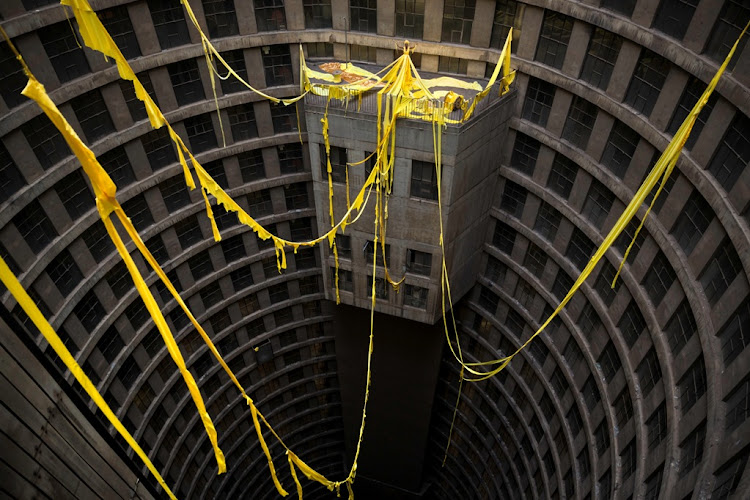 Five art events not to miss in June:

1. THE SPIRAL OF CONTAINMENT: RAPE’S AFTERMATH BY ELISA IANNACONE

The Spiral of Containment: Rape’s Aftermath is series of 25 photographs, written stories and sound clips by Mexican-Canadian photographer, cinematographer and foreign correspondent Elisa Iannacone which tells the stories of 25 survivors of sexual assault.

Seven of the photographs were captured in SA and each features a portrait of a rape survivor in a magical-realist-constructed environment that ties in with the story being told. In so doing,  Iannacone, working with the survivors, makes a statement of survival, empowerment, agency. Her own portrait and story is included in the exhibition and acted as the catalyst for this series after a tragic rape all but brought her life to a halt.

Having first been exhibited at the Oxo Towers in London, Iannacone’s body of work was also shown at the Cape Town Art Fair and NIROX and has been now been curated to be exhibited in the isolation cells of Constitution Hill’s Number 4 Prison. This setting acts as both a haunting canvas of the subject matter but also as a space of triumph, in tying in with the symbol of Constitution Hill today.

• The Spiral of Containment: Rape’s Aftermath will be available online and on show at Constitution Hill in Johannesburg until June 25. The exhibition is open to the public to view Mondays to Sundays from 9am — 5pm, with walkabouts every Saturday at 11.30am Book a slot online. 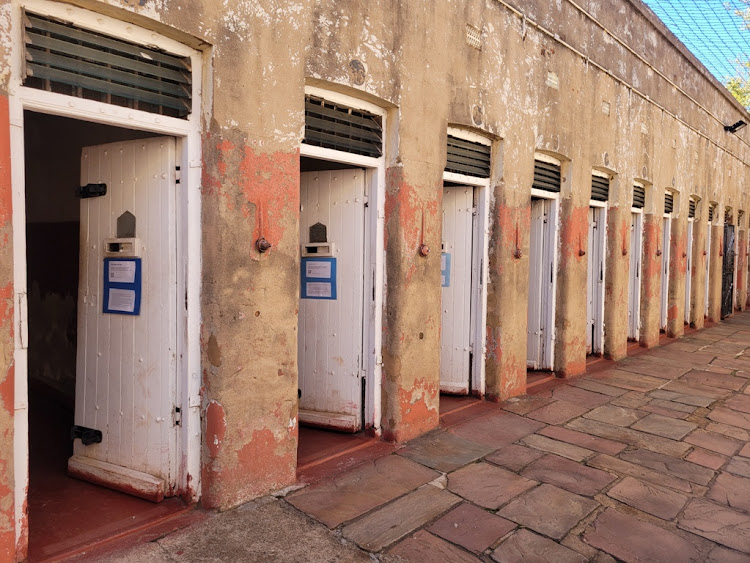 Coinciding with what would have been the late Robert Hodgins’ birthday on June 27, +/- 102 is a tribute to the artist who passed away in 2010.

Featuring paintings, drawings and oil monotypes — many works which will be exhibited for the first time — the exhibition title is a play on UBU: +/- 101, a 1997 exhibition which featured Hodgins, Deborah Bell and William Kentridge and dealt with the artists' interpretations of Alfred Jarry’s play Ubu Roi. UBU: +/- 101. 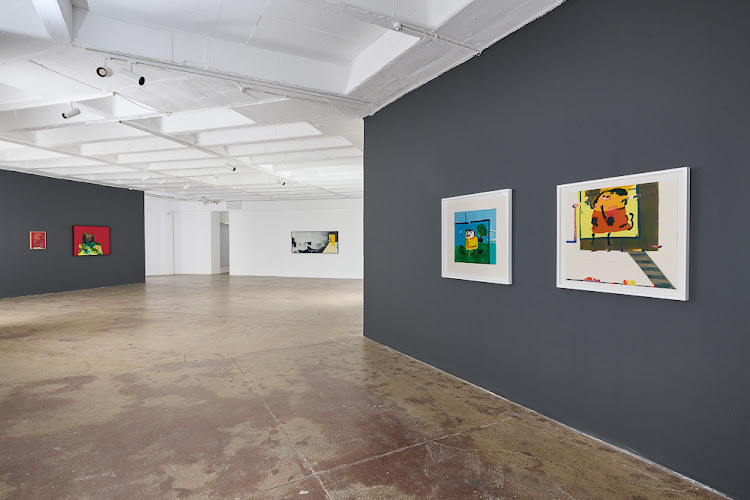 Installation view of +/- 102 by Robert Hodgins.
Image: Courtesy of the Goodman Gallery

Ancestors and Dreams, held in collaboration with Everard Read CIRCA gallery in Johannesburg and Jacaranda Gallery in New York, is an online exhibition of contemporary SA art and select pieces of traditional African art.

The online catalogue provides a platform to showcase fine examples of traditional African artworks which are housed by museums outside Africa and therefore mostly inaccessible to African audiences.

The catalogue is also meant to create a conversation between contemporary and traditional pieces. “Through our collaboration with Jacaranda, we hope that collectors who focus solely on contemporary art or traditional art, realise the valuable conversations between them,” write Gina Mollé & Grace O’Malley from Everard Read. 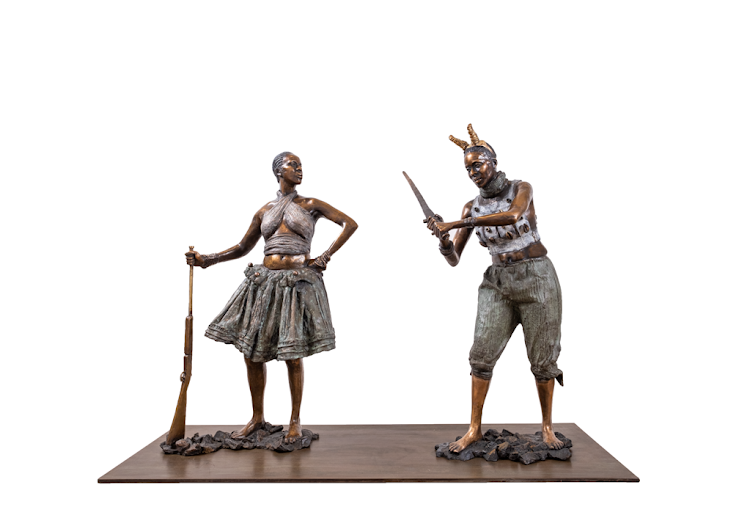 In his first solo exhibition in Cape Town, Neo Matloga has remained true to his style of collage-style artworks but this body of work — which he created at his home studio in Limpopo — has been inspired by everyday moments in a shift away from plays, soap operas and advertisements.

“Some paintings start with a line drawing or a collage, but the composition happens when I’m not in the studio,” Matloga says of Déjà Vu. “The marriage I use to invent scenes is a coupling between imagination and references for composition-making.

“I’ll be at the tuck shop down the street and see some sort of movement, something in nature, a shape — almost like a daydream. I’ll see the image before me, and then I’ll rush back to the studio to paint what I remember.”

• Déjà Vu will be running until June 25 at Stevenson Gallery in Cape Town. The gallery is open from 9am to 5pm Mondays to Fridays and from 10am to 1pm on Saturdays. 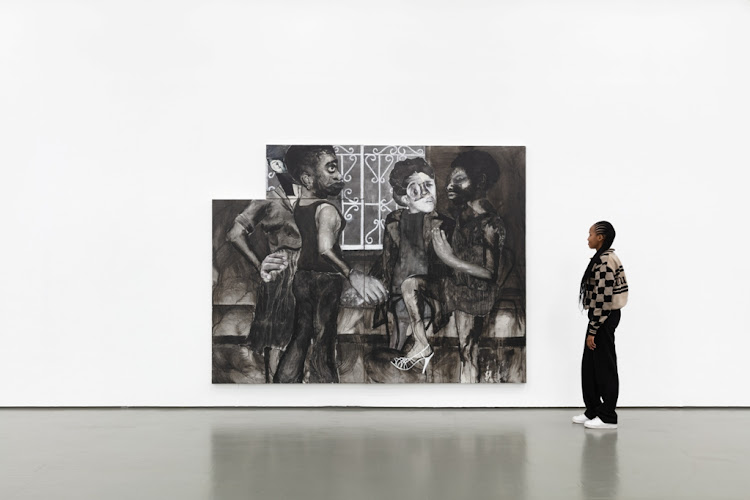 To commemorate 56 years since the inception of the Irma Stern Trust, 124 artworks from the collection — many which have not been exhibited before — are being released for an upcoming Strauss & Co auction.

These works will form the bulk of the  single-artist auction which will comprise 140 works in total, comprising paintings, prints, drawings, books and a stoneware piece spanning Stern’s distinguished career as an artist.

• The lots are available to view at Welgemeend Manor House in Cape Town from June 2 and a walkabout with a Strauss & Co specialist will take place on June 4 at 11am. The auction will start at 6pm on June 8 and will be run as a live virtual auction. Visit the Strauss & Co website for more information. 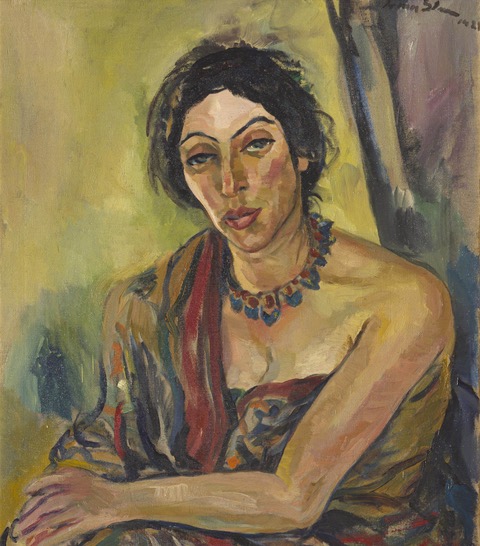 What new curator will bring to this year's Decorex Africa

Theo Bothma says 'the future of the built environment is driven by collaboration'.
Lifestyle
1 month ago

Sue de Groot talks to one of SA’s most prolific and interesting artists, who is currently bowling over the English aristocracy with his dreamlike ...
Lifestyle
1 month ago

‘Good Neighbours’ in spotlight at the 2022 Nirox sculpture showcase

The exhibition supports the work of more than 30 artists in the main programme.
Lifestyle
1 month ago