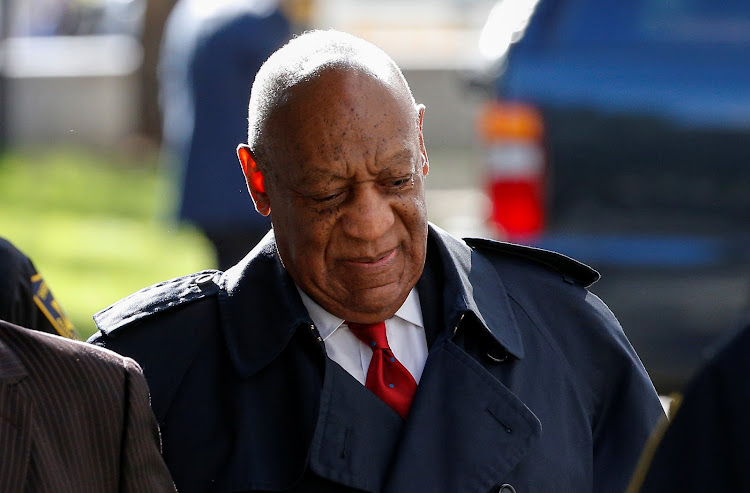 This week's verdict came nearly a year after actor and comedian Bill Cosby was freed from prison when Pennsylvania's highest court threw out his sexual assault conviction in a different criminal case there. File photo.
Image: REUTERS/Brendan McDermid

A California jury in a civil case ruled on Tuesday that Bill Cosby sexually assaulted a woman at the Playboy Mansion in 1975 when she was a teenager, and ordered the comedian to pay her $500,000 ( R7.9m) in damages for emotional distress from the incident.

Judy Huth had testified the comedian invited her and a friend to the mansion when she was 16 and he was 37, and forced her to perform a sex act.

The verdict came nearly a year after Cosby was freed from prison when Pennsylvania's highest court threw out his sexual assault conviction in a different criminal case there.

Huth's lawsuit was the first civil case against Cosby to come to trial.

Huth, now 64, said she was “elated” by the ruling in the case, which she filed in 2014 after media reports detailed accusations against Cosby by multiple women. Those reports helped stir up memories of her encounter with Cosby, Huth said, and triggered four years of anxiety and other symptoms.

“It's been so many years, so many tears,” Huth told reporters outside the California Superior Court in Santa Monica.

“It's been a long time coming.”

Cosby, who did not appear in person at the trial, denied Huth's allegation. His defence team will appeal the verdict, said Cosby's spokesperson Andrew Wyatt.

“Mr Cosby continues to maintain his innocence and will vigorously fight these false accusations so that he can get back to bringing the pursuit of happiness, joy and laughter to the world,” Wyatt said.

A 64-year-old woman wants damages from Bill Cosby, saying he assaulted her in the Playboy Mansion when she was a teen
World
4 weeks ago

Cosby, 84, is best known for his role as the lovable husband and father in the 1980s television comedy series The Cosby Show, earning him the nickname “America's Dad”. But his family-friendly reputation was shattered after more than 50 women accused him of sexual assaults over nearly five decades.

Huth brought the case under a California law that allows people who claim they were abused as children to file civil cases years later as adults.

Three other women who have accused Cosby of abuse attended the trial and told reporters they felt vindicated by the verdict.

Lili Bernard, who has a civil lawsuit pending against Cosby in New Jersey, said the ruling was “important for every sexual assault survivor who has not received justice”.

“We will never give up,” she said.

The jury did not rule entirely in Huth's favour. By a 9-3 vote, they said she had not provided “clear and convincing evidence” Cosby had acted with “malice, oppression or fraud”.

If jurors had voted yes on that question, they could have provided additional punitive damages to Huth.

In video of a deposition shown to jurors, Cosby said he did not remember Huth. But he said the incident could not have happened because he would not have pursued sexual contact at that time with someone who was under age 18.

When the lawsuit was filed in December 2014, Huth said the incident occurred in 1974, when she was 15. She told jurors she recently concluded she had been mistaken about the year and now believes it happened in 1975.

A woman who accused Bill Cosby of sexually assaulting her in the mid-1970s began her court testimony on Monday, describing how she and a friend met ...
Lifestyle
4 weeks ago

Forty years after Stefan Tetenbaum wrote the book, it shows why Hef did anything in his power to bar its publication
Opinion & Analysis
2 months ago

Ghislaine Maxwell, the favourite daughter of a bullying press baron, is on trial in New York for procuring underage women for her former lover ...
Opinion & Analysis
6 months ago