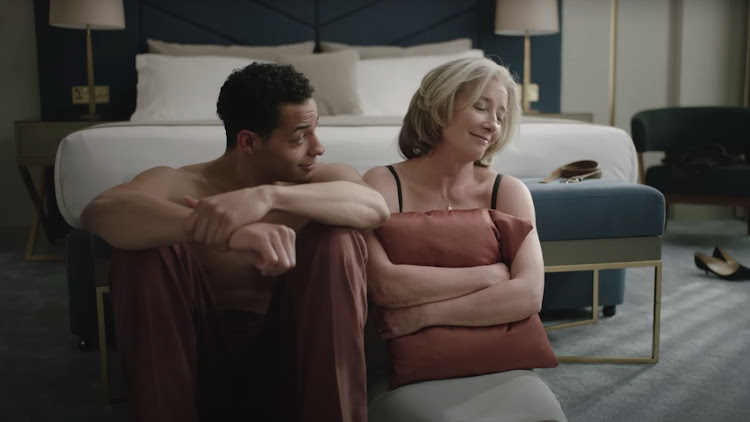 Sixty-three-year-old Emma Thompson has sex with 20-something washboard-ab-sporting heart-throb Darryl McCormack in a hotel room. Not exactly the type of film pitch that gets producers excited, but that’s the premise of the sex-positive heart-warmer Good Luck To You, Leo Grande. Written with gentle humour and mostly tender understanding by British comedian Katy Brand and directed with equal empathy and restraint by Australian Sophie Hyde, it’s a late coming-of-age sexuality story that’s basically a filmed play about two strangers trying to help one of them have a much-needed, if very belated, orgasm.

Thompson is Nancy Stokes, a retired religious education teacher and recent widow who decides life is too short to have spent most of it having not very good sex with only one partner. For the job of rocking her world she selects Leo Grande (McCormack) because she likes the way he looks in his photo on the internet. When Leo arrives at the hotel room Nancy has booked for the “big O-ccasion” he finds a typically uptight, neurotic “no sex please, we’re British”, frumpish wreck who, as soon as he enters (the room) begins to tell him what a bad idea this is. But Leo is a cool, smooth and — to Nancy’s surprise — smart and thoughtful gigolo who enjoys his work and is, as he assures her, very good at it.

What follows is a series of politely sex- and sex adjacent-themed conversations that reveal neither Nancy nor Leo are quite what they’re pretending to be and may need each other more than either of them realised. Things do eventually go where you expect them to, but by the time they get there, the sex and nudity seem unnecessarily tacked on so Thompson can prove her dedication to the material by going further than most actresses her age for her craft.

WATCH | The trailer for 'Good Luck To You, Leo Grande'.

Overall it’s a solid chamber piece that benefits from Thompson’s committed performance and awkward British charm and McCormack’s sly ability to match her and show he’s not just a pretty face.

As a sex-positive drama that explores the sex life of an older woman it’s a welcome change from the navel-gazing style of obsession with youthful sex that populates most films and shows about the subject. It’s also gently funny without being slapstick or taking potshots at Nancy’s age and lack of experience. But it's not as radical as many of the gushing reviews would like you to believe.

Yes, it’s about time the movies recognised that “older people do bonk” and desire pleasure in the bedroom, but there’s something a little too comfortably neat about the film’s narrative and character arcs that prevent it from exploring the darker, messier realities of its premise. It keep firmly within the realms of recent British drama, which tends to prod at uncomfortable social taboos in a polite and light-humoured way, avoiding too much embarrassment. Even the sex scenes and the much talked about full frontal Thompson moment at the end are ultimately like the film itself, a little on the sweet side and not adding much substance.

At a time when mainstream cinema has become increasingly sex averse, it’s still refreshing to see a film attempting to move the representation of the one thing we can’t stop talking and thinking about, and doing,  forward, even if it is with baby steps. Like the encounter at its heart, Good Luck To You, Leo Grande could have been a lot worse than it is, but it also could have been better if it had gone in search of a bigger, longer, more memorable “Oh”.

• ‘Good Luck To You, Leo Grande’ is on circuit.

‘Marikana: Ten Years On’ shines a spotlight on those left behind

A new exhibition, part of this year's National Arts Festival in Makhanda, highlights the plight of the devastated families struggling in the ...
Lifestyle
1 month ago

While shooting 'The Old Man', Bridges had a close call with death — off- and on-screen. But the Dude abides and talks about his latest production
Lifestyle
1 month ago