Filmed in Pretoria, 'Ludik' is tipped as the next 'Ozark' 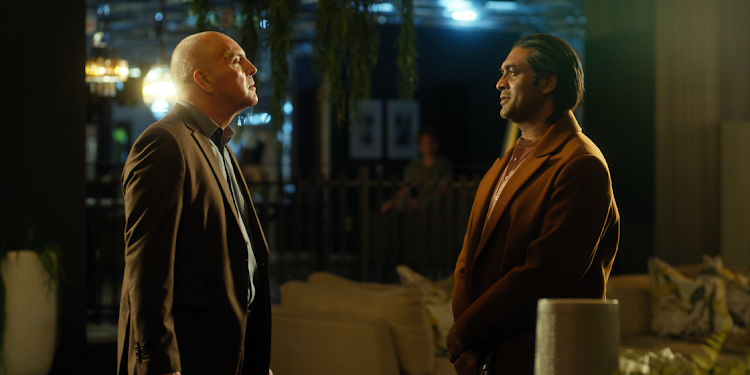 Arnold Vosloo, left, as Daan Ludik and Vikash Mathura face off in a scene from the new Afrikaans Netflix series 'Ludik'.
Image: Supplied

A movie script that lay abandoned for nine years has resurfaced to become Netflix's first global series in Afrikaans.

The “skop-skiet-en-donder” series, filmed in Pretoria, will launch internationally next month.

Here is what Vosloo had to say about the project:

Netflix director of licensing and co-productions for Africa, Nkateko Mabaso, said Ludik was the first Afrikaans production to make it onto the service. “It will go out globally on August 26,” he said.

The six-part series dubbed “the next Ozark” was snapped up by Netflix after it was rejected by local broadcasters. It has been produced by Rose and Oaks Media, a company formed by Anele Mdoda, Paul Buys and Frankie du Toit.

The trio dreamt up the Afrikaans production which they hope “finds a corner in the Netflix universe through its unique South Africaness portrayed by colourful characters dealing with issues and situations the audience can identify with”, according to Buys.

“We roll with giants,” said Mdoda, who describes the team as a perfectly matched trio. “My forte is the unscripted, Paul is strong with the scripted and Frankie just fits right there in the middle.”

It was their collaboration, the rejected script written by Buys and Annemarie van Basten and a big dream to go global that sparked their decision to take the project to Netflix.

“We did shop the series about to local broadcasters in 2017 without success, though Vosloo was already attached to the series based on the screenplay. I think it was too dark for them at the time. A lot has changed in the world of content over the past five years,” said Buys.

Du Toit said: “The fact that local broadcasters weren't keen on Ludik isn't a slight on any of them. We live in a world where everything changes so rapidly it's hard to predict tastes and trends.

"Broadcasters have tough choices with so many talented creators and producers and we continue to work alongside many local channels.

"The team at Netflix loved Ludik from the get go and believed we were onto something special.”

The character of Ludik was created by Buys. He wrote the part for Vosloo, who he had wanted to work with since his film-school days in 2006.

He shared his idea with Van Basten, and together they fleshed out the world, characters and story — Daan Ludik, a prominent family man in affluent Pretoria East, is willing to do whatever it takes to build a furniture empire out of nothing.

After seeing the script, Vosloo was hooked.

Speaking to The Sunday Times, he said: “I am grateful for my success in Hollywood but let me assure you it’s even more wonderful to be coming home and working in Afrikaans specifically, and in Pretoria ... Pretoria is like a character in the show.”

With Vosloo bagged as their lead and a vision for something “unfiltered, gritty, rough and very real”, the Rose and Oaks trio headed off to pitch the idea to Netflix.

“We knew the show had to find the right home and we weren't willing to compromise on how woes [hectic] it was, which is one of the reasons it stood still for a while,” said Du Toit

“We took the series to Ben Amadasun at Netflix who was excited about having an Afrikaans title with Arnold Vosloo attached,” said Buys,  adding that after a few meetings and submitting screenplays for the six episodes they were given the go-ahead.

If the show draws high numbers, there’s a chance of more seasons.

“It’s one hell of a ride. I am definitely on board for Ludik 2 and 3. We always planned on 18 episodes so we’re good to go. People must just watch,” Vosloo said.

Soprano Brittany Smith will be jetting to New York for a residency which supports a new generation of singers.
Lifestyle
1 month ago

Arthur's Mini Super in Sea Point appears to be the perfect place to meet the dominant personality that resides in Julia Anastasopoulos.
Lifestyle
5 months ago

The actress tells us what's on her radar and hints at what could be next for SA's fave fictional Jewish princess, Tali Babes
Lifestyle
10 months ago