‘Under the Banner of Heaven’ lifts the veil on Mormonism

Inspired by a true-crime novel, this Mormon murder drama reveals the dark and abusive side to religion 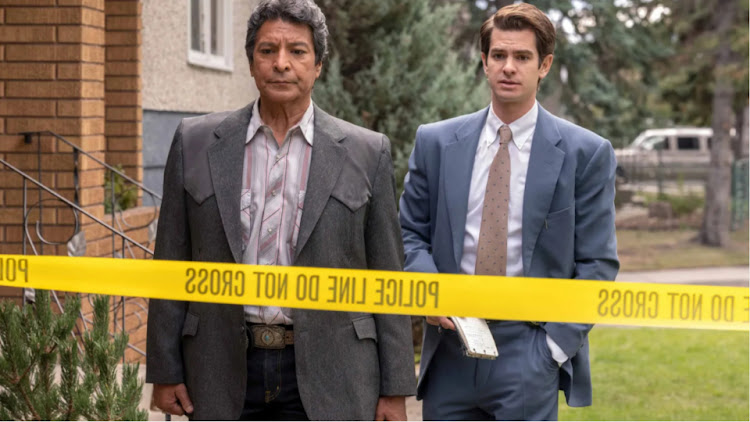 Gil Birmingham as Bill Taba and Andrew Garfield as Jeb Pyre in 'Under The Banner of Heaven'.
Image: Disney+

In the prologue to his 2003 true-crime book, Under the Banner of Heaven, author Jon Krakauer observed: “There's a dark side to religious devotion that's too often ignored or denied. As a means of motivating people to be cruel or inhumane — as a means of inciting evil, to borrow the vocabulary of the devout — there may be no more potent force than religion.”

Krakauer’s book investigated the 1984 murders of 24-year-old Brenda Lafferty and her 15-month-old daughter and the dark, twisted web of fanaticism and political intrigue within the Mormon Church that led to them.

For Oscar-winning screenwriter Dustin Lance Black (Milk) who was raised a Mormon and has spent much of his life grappling with the seemingly irreconcilable bridge between his church and his identity as a gay man, Krakauer’s book presents potentially rich, dramatic material.

With varying degrees of success Black attempts to tie together the threads of Krakauer’s probe of the historical battles within the church of the Latter Day Saints (LDS) and their long-reaching effects on the deeply conflicted and disturbed men of the Lafferty family, that Brenda (played by Daisy Edgar Jones) married into. Black’s grim, ominous seven-part crime drama is a multi-character, multi-story, time-travelling narrative whose parts are more intriguing and emotionally satisfying than its whole but which still raises questions about “the dark side of religious devotion”.

Actress Vicky McClure tells us what attracted her to the new Britbox show and what it’s like to be the star of a global phenomenon.
Lifestyle
2 weeks ago

Andrew Garfield plays investigating detective Jeb Pyre (an upstanding Mormon name if ever there was one) whose own deeply held LDS beliefs are tested to breaking point by the brutality and senselessness of the murders. His determination to find the truth places him in increasingly bitter conflict with the gatekeepers of his church. He’s joined by bristly Native American detective Bill Taba (Gil Birmingham) in an unlikely partnership and, as they begin to peel away the layers, Brenda’s story is fleshed out in flashback.

We learn of the bitter rivalries and deep psychic wounds that afflicted the men of the “Utah Kennedys” — the rich and powerful Lafferty family. We're taken further back into history through a third storyline — the weakest, most lagging and intrusive of the threads — which traces the divisions in the LDS over the thorny issue of polygamy back to its founding 19th century roots under the leadership of John Smith and Brigham Young whose beliefs made them the target of the fury of the conservative Christianity of the Old West frontiersmen.

As the toxic masculinity and fragile uber-patriarchy of the Lafferty brothers is challenged by their wives — with Brenda leading the charge — they find refuge in backward-looking practices to which they become so devoted that they remove themselves from society, living off the grid and preparing themselves for an apocalyptic reckoning with law enforcement authorities of a government whose rules — and taxes — they refuse to accept, whatever the cost to their wives, children and family members.

WATCH |The trailer for 'Under the Banner of Heaven'.

With each of his encounters with the increasingly more religiously fundamental and deranged Lafferty brothers, Pyre’s own LDS devotion places him in psychological and philosophical conflict with his community and family.

This slow building confrontation between divisions within the LDS; Mormonism’s present and its past; and between the pressures of the modern world and old-world loyalty to divine dictums of faith and morality, builds with suffocating existential angst towards an inevitably despairing but morally ambiguous conclusion.

Under the Banner of Heaven is a whydunit rather than a whodunit even if the “why” remains distressing to accept. It's a damning indictment of the LDS who've used and abused their power to protect the institution’s reputation above the lives of its believers.

It isn't easy to watch and some of the debates on the finer points of Mormon practice and history may be of scant interest to non-believers. But it provides an intriguing, uncomfortable, sometimes gruesomely provocative exploration of big issues. It keeps you watching to see to what lows its damaged, misbegotten men will sink as they retreat into the flimsy protections offered by a faith stuck in the past.

As Krakauer, who wasn't involved in the adaptation, wrote in his book, the investigation of the terrible murder of a young Mormon mother and her infant child may not offer as many answers as it raises questions but it's useful, “For what it may tell us about the roots of brutality, perhaps, but even more for what might be learned about the nature of faith.”

• 'Under the Banner of Heaven' is now streaming on Disney +.

63-year-old Thompson goes further than most actresses her age for her craft but this tender film doesn't quite reach the expected climax.
Lifestyle
3 weeks ago

While shooting 'The Old Man', Bridges had a close call with death — off- and on-screen. But the Dude abides and talks about his latest production
Lifestyle
1 month ago