The resale of limited-edition athletic footwear has become big, sneaky business among the hypebeasts of Cape Town 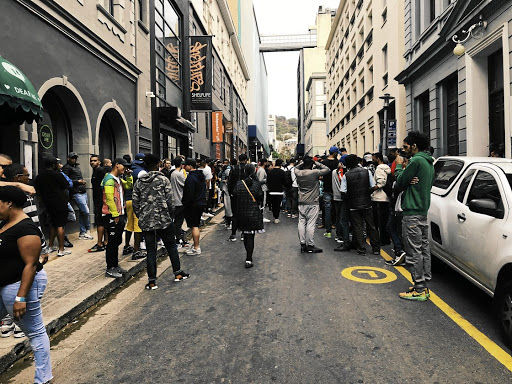 Early on a Saturday in downtown Cape Town, sneaker buyers gather. Among them could be scores of people hired to stack the odds during the lottery-style shoe sale.
Image: Serena Hawkey

As the Saturday morning fog clears, a mob of well-dressed young people mills impatiently outside a shop on a central Cape Town side street. They're all wearing high-end sneakers and a blue paper bracelet. There is an air of expectation and little conversation. Everyone hopes that when the store opens it will be their lucky day and one of only 40 pairs of shoes on offer will be theirs.

These are not ordinary shoes. Word on the side street is that the store is launching Nike's new Sean Wotherspoon Air Max shoe, winner of the sportswear giant's first design competition.

The launch offers more than just a chance for these young city-slickers to be on the cutting edge of athleisure fashion; it is a door into the booming underworld of footwear black markets.

The informal redistribution of high-end shoes from wholesalers ("plugs") to young brand-crazy footwear connoisseurs has become a high-profit industry with high-profile superstars. On online forums and in cities across the world, the fad is drawing serious money. A shoe launch is a big event.

Shoe launches function either on a first-come, first-serve basis or as a lottery

It is a side of the industry that worries official sellers, who say it makes it harder for ordinary people to participate in the excitement of launches.

Shoe launches function either on a first-come, first-serve basis or as a lottery.

For the former, shoppers line up in the early hours, often missing school and work to be first in line.

For a lottery-based launch, such as the Wotherspoon event in Cape Town, the number on your blue paper bracelet is called at random, giving everyone an equal chance of going home with a pair of limited-edition shoes.

But as in any lottery, the more tickets you have, the more likely your number is to be called. It's no surprise, then, that the moguls of this underworld hire dozens of street kids to attend the launch in hopes of claiming at least one pair.

Stilettos and formal shoes could become to the fashion industry what vinyl records are to music.
Lifestyle
3 years ago

"It's a good deal," says 33-year-old Gino Lange. "The street kids get a bit of money and these guys have a better chance of getting the shoes ... sometimes there are 80 people here all working for the same guy."

Lange has been collecting shoes and attending launches since he was a schoolboy basketball player lusting over the latest Jordans. In fact, he is so passionate about high-end footwear that he plans to open his own store up the road. He admits he has scores of people at the launch, hired to help secure a few pairs of the Wotherspoon Air Max for the store.

In Cape Town on this Saturday morning the crowd has gathered outside Shelflife, on Longmarket Street.

"Resellers will pay as many as 60 people to stand in line at a launch ... We have tried to restrict this by making people show us that their IDs match their bank cards," he says.

Big brands will supply only to accredited official outlets, and limited stocks of each shoe are made available, he says. "When we have a launch, within a couple of hours the shoes will be on eBay at triple the price. After this the shoes are out of reach for the everyday man."

In the US, shoe-collecting is increasingly regarded as a legitimate profession, one in which a few lucky 16-year-olds are making millions. Footwear culture in South Africa is booming as well; "hypebeasts", those who are "so obsessed with the latest drops and releases that they will do whatever it takes to get their hands on the latest shoes", are common in Cape Town, says Lange.

"You would not believe how guys are. They will stalk your Facebook and Instagram to find your plug."

The money involved is "crazy", he says. "People buy these shoes for R2,400 and turn around and sell them for R10,000. There are shoe launches almost every week and I go to all of them. I'm trying to get as many shoes as I can for the opening of my shop."

But not everyone at the launch is a mogul like Lange. Nineteen-year-old Michael Fischer is here because he loves fashion, and he hopes to save some of his 30-odd pairs of Nikes for his future children.

"I spend most of my money on shoes," Fischer says, "I just really like them... they make me feel good."

Last March, 28-year-old entrepreneur Sean Wotherspoon, from Richmond, Virginia, was named by Nike as the winner of its Vote Forward Air Max contest to design a sneaker. His shoes went on sale in Europe on March 24 and in the US on March 26, for $160 (R1,900) a pair. In South Africa they cost R2,400.

Wotherspoon is a fan of retro corduroy, his material of choice for the prizewinning sneaker.

Since the announcement of his big win, Wotherspoon, something of an online sensation in the world of vintage clothing and retro fashion, has become a social media rock star with almost 400,000 followers on Instagram and 140,000 subscribers on YouTube.

• The author of this article, Serena Hawkey, is on an SIT Study Abroad programme with Round Earth Media.

As the sportswear giant brings its self-lacing shoe to Europe, Hatfield talks innovation and imagination
Lifestyle
3 years ago