Riky Rick: the most stylish man in South African music

If you needed proof of King Kotini's style credentials, consider the fact that Gucci requested his presence at Milan Fashion Week 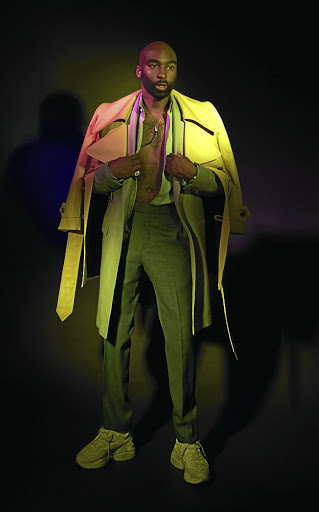 Musician Riky Rick has never been scared to experiment with his style and clothing.
Image: Steve Tanchel/ Red Hot Ops

If you Google Riky Rick there's a good chance you will come across an image of him sitting in a delectable leather wingback chair reading from the Bible of Gucci.

The room looks like the private smoking chamber for people whose surnames are preceded by titles. In other words it is the perfect lair for King Kotini.

That picture and his now-defunct Instagram account are chief among the reasons why, despite the relatively short amount of time spent in the industry, Rick has emerged as the most stylish man in South African music.

If you're unfamiliar with the name, Riky Rick, neé Rikhado Makhado, came to prominence back when Cassper Nyovest was still rocking a ponytail that tickled his upper thighs.

While not as flamboyant at the time, you could see even then that Rick's style was different from that of his contemporaries.

This was a time when a baggy basketball top and near ankle-length cargo shorts was the outfit du jour and Rick was not immune to the lure of trends. His black and yellow "Boss Zonke" basketball shirt was a signature look.

What set him apart from his contemporaries was his willingness to experiment. In the 2014 video for Nafukwa he was already showing a flair for something a little edgier than the traditional mainstream hip-hop look of the time.

By the time the 2015 Boss Zonke video rolled around he had developed a taste for the kind of brightly coloured motorcycle jerseys that people who ride scramblers wear, and for showing off his heavily tattooed chest.

It was not until 2016, when he dropped the video Sidlukotini, that he fully embraced the kind of luxury insouciance we believe has earned him the title of the best-dressed male musician in the land and embodies the King Kotini moniker. One may be asking oneself what in the name of absurd phrases "luxury insouciance" is.

Well where Riky Rick is concerned it refers to his ability to dip sumptuous luxury into an "I don't give a fuck" type of mien. As a general rule, people who dress head to toe in Gucci look like it has taken them and three stylists about five hours to put the whole look together.

More importantly, they tend to have an incredibly tense aura about them. Undoubtedly it has something to do with the fear that a stray drop of vodka and cranberry juice will somehow find the whitest part of their outfit, thus initiating the apocalypse.

King Kotini doesn't have those problems. Given the sheer decadence of his outfits one must imagine they take a while to put together but he wears them with the kind of confidence that suggests each item is disposable.

If you needed proof of his style credentials, last year Gucci requested Rick's presence at Milan Fashion Week and he did not disappoint.

At the show he wore an opulent Ferrari-red jacket, mustard polo neck and Prussian blue (Google it) chinos. That same year he was spotted in Paris draped in a tan trenchcoat, faded rainbow polo neck, swanky shoes with the Union Jack on them and a Gucci bag large enough to comfortably carry a dassie.

It's no surprise then that this was the year he became the first local rapper to make the cover of the GQ Style issue in South Africa.

Until recently all of this luxury insouciance had been available for the world to perve over simply by visiting his Instagram page but unfortunately that ogling session has come to an end. Citing a desire to focus on his family and faith, King Kotini deleted all of his Instagram posts and announced that he would be taking an indefinite hiatus from the public eye.

Whether or not we will be seeing more Riky Rick x Gucci remains to be seen. What can perhaps be seen, if his social media purge is any indication, is a change in aesthetic.

What will come will come. In the meantime it is very difficult to deny that, at least for a couple of years, South African music fans got to witness something fairly rare among its male artists. We got to see an edgy bud, grow into a haute couture rose that had somehow avoided being pretentious.

Sun Met: Ricky Rick & Reason show you how to standout in a two-piece suit

Although most of our attention was initially on the women who attended the 2018 Sun Met, this year’s theme also inspired an explosion of innovative ...
Lifestyle
3 years ago

When you land an invitation to the opening of the world's largest museum dedicated to contemporary art from Africa and its diaspora, you know it's ...
Lifestyle
3 years ago

Wearing vintage clothes is recycling at its most stylish

Wearing vintage, like recycling, is uber cool right now. There are several reasons for this.
Lifestyle
3 years ago