The shirts that let Nelson Mandela wear freedom on his sleeve

Madiba's trademark technicolour shirts made a fashion statement. What they said is ‘I am not like any other leader. I’m setting a new stage’ 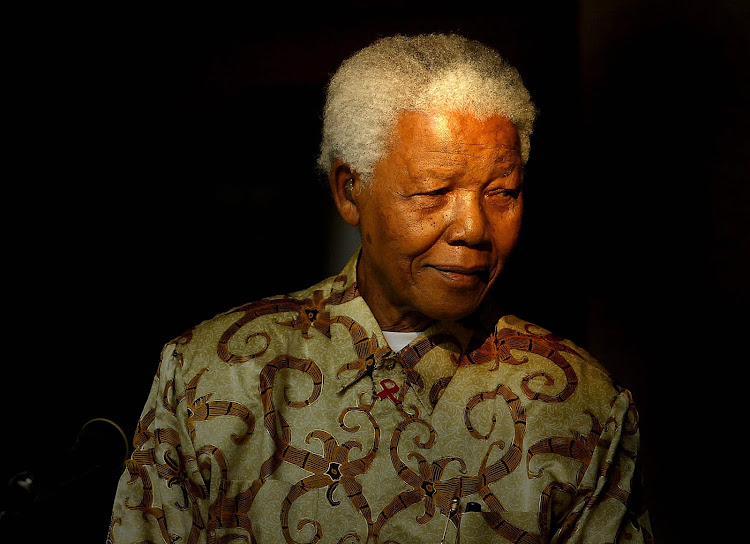 “It had the aura of a wonderful, huge African bazaar,” says fashion designer Marianne Fassler of the Madiba Shirt.
Image: Media24/Gallo Images/Getty Images

A rabbi walks into a hotel in Monaco. In the lobby, there’s pandemonium as press swarm around a celebrity. The rabbi taps a security guard on the shoulder and says: “I’d like to bless that man. I’d like to bless Nelson Mandela.”

Noticing Madiba’s shirt, the holy man from New York asks him: “Is it in honour of Joseph’s coat that you wear your trademark shirts?”

Madiba replies: “No, I wear these shirts to represent my people and their diverse cultures. And besides, I spent many more years in prison than Joseph.”

The story might be fiction, but we do know Madiba saw his amazing technicolour shirts as more than just bits of thread.

“By wearing a shirt, he was telling us he was going to change ... all the institutions, all the ingrained, meaningless protocols, break down all the barriers between us,” says fashion designer Marianne Fassler.

As a reporter following Nelson Mandela during the early years of his presidency, Patrick Bulger had many occasions to witness him deviate from his ...
Lifestyle
3 years ago

A dramatic example: his first state visit to England, in 1996. “You know the English people, when you are next to the queen you can’t even rub your nose,” says Vukani fashion label founder Sonwabile Ndamase. “But he danced next to her.” In a black shirt and trousers, nogal.

“Nobody had the courage, but he said: ‘I’ll go the way I am.’ And people accepted it, because he had this flair and way of laughing and joking. He never did it superficially. He never said: ‘I’m going to wear the shirt just to wear it.’ No. He wore it because he believed in it.” 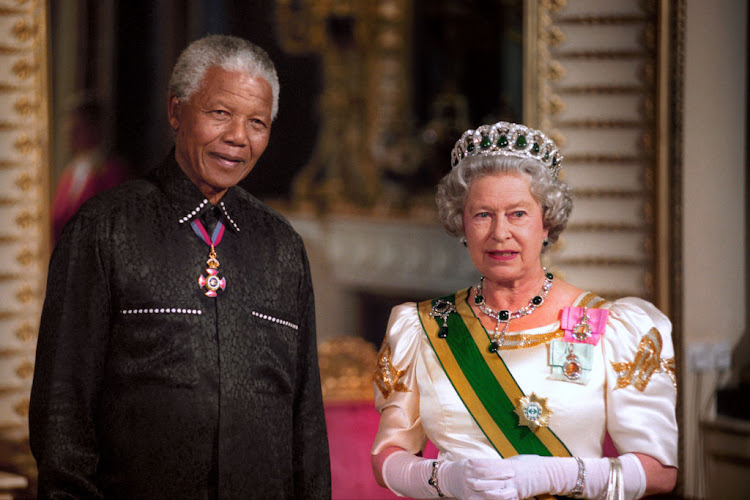 South African President Nelson Mandela stands with Queen Elizabeth II on his arrival at Buckingham Palace, London, for a state banquet in his honour on May 3 2000.
Image: PA Images via Getty Images

“Madiba Smart” began appearing on invitations to gala events from New York to London. The message went deeper than decorum, says Fassler. It said: “You can come in your traditional outfit. You don’t have to wear a Western suit.”

Surtee, who flew around the world within private planes, recalls a particular dinner in Washington. A few royals, Hollywood stars and Bill and Hillary Clinton were among the guests.

“Funnily enough, everybody wore the shirt. And it was meant to be a formal occasion. Mandela said: ‘At least I made Washington wear what I wear.’”

Madiba was a regular at Surtee’s father’s store, Grays, in central Joburg, in the ’50s. Over the years, “we kept in contact and became very close”, he says.

Then he got a phone call one day — he was to go and see Mandela in prison, and bring his tailor’s kit.

Come the Madiba Shirts era and the orders for suits dwindled.

“The shirt brought him closer to the people. The only time he wore a suit was when he went to parliament. He liked florals. He was so particular. Sleeves couldn’t be too long. It had to be perfect.”

Italian designers flew to South Africa with their swathes of cloth and measuring tapes, and Surtee supervised. But if anyone designed the Madiba Shirt, it was Madiba himself, he says.

Ayanda Mabulu, the artist known for his often-shocking works of fornicating politicians, moves from the phallic to the fascist in his new show ...
Lifestyle
3 years ago

It was on a day in 1995 that fashion designer Desré Buirski received her first invitation to have tea with a president. “I almost turned to a statue, I was in such shock. I went through a period where I used to eat, drink, sleep, pray, meeting Nelson.”

It was the realisation of a dream, and all because she had given Madiba a gift — a shirt from the clothing company she ran. Now she sat in his office, propping herself up with cushions. “He was ever so tall.”

It was the start of what she calls the “silk shirt era”, which lasted more than a decade. Buirski and Madiba’s then-personal assistant, Mary Mxadana, who would call her up with special commissions, became “dear friends”.

The shirt that stands out for Buirski is a black and white silk one, because of the historic moment that Madiba wore it — the signing of the constitution in Sharpeville in 1996.

Once Madiba told her he’d had a phone call from Giorgio Armani, “who was a bit upset, because he hadn’t been wearing one or two suits he’d sent Madiba. He’d been seen wearing these funny shirts.”

It was always about colours. Having spent so much time in a prison uniform, I think [Madiba] wanted to be free to express himself

At their first meeting, he’d spelt out his preferences.

“It was always about colours. Having spent so much time in a prison uniform, I think he wanted to be free to express himself.

“He was making a statement: ‘I’m not like any other world leader. I’m setting a new stage.’ You’d see all these heads of state in their dark suits looking sombre and Nelson would be shining like this bright light in the middle of them all.”

A graphic designer by trade, Buirski worked with Indonesian artists who hand-painted the designs on silk. Coming out of jail, Mandela loved that the shirts “were so comfortable, soft on his skin”, she says.

“He wanted light fabrics,” says Ndamase, who also designed shirts for Madiba. “He told me: ‘I have lung trouble, so I need something I can breathe in.’” He’d been exposed to dust from working at Robben Island's limestone quarry.

“My brain started to go all over the show. I said: ‘I should think then I will make up very nice jackets.’”

Mandela interrupted him: “I don’t need anything that is more formal. I don’t want to wear a bow tie. I just want to look nice.”

And another thing: “I don’t want to [wear] anything that OR Tambo has been dressed in.”

While the late Winnie Madikizela-Mandela was never afraid to speak her mind, she often made bold statements with her sartorial choices too.
Lifestyle
3 years ago

Ndamase rifled through his studio for swatches — audacious designs of damask, wax prints and embellished Xhosa fabric that spoke to Madiba’s roots.

When he presented his creation, Winnie Madikizela, for whom he designed clothes for years, along with her daughters, teased him.

“She said: ‘Why are you making shirts with a curtain fabric?’ That was so inhumane of her, but she said it in that voice of hers.”

“It had the aura of a wonderful, huge African bazaar,” says Fassler of the Madiba Shirt. “There was something quite open and relaxed about it all. But it was always buttoned up. There was still a sense of dignity and occasion.”

The shirts spanned a huge range. They weren’t all patterned or colourful or Batik silk. But one thing was standard — they were never tucked in, says Fassler. “That’s the difference between a Versace shirt and a Madiba shirt — it has to hang out.”

“Tata said: ‘You are the last one to speak because you are always wearing a dress.’ What I loved is how he embraced the shirts, defended them.”

Bold the shirts may have been, but Madiba drew the line at gaudy. Fassler says: “Everybody thought whenever they made a crazy shirt it was a Madiba Shirt.” 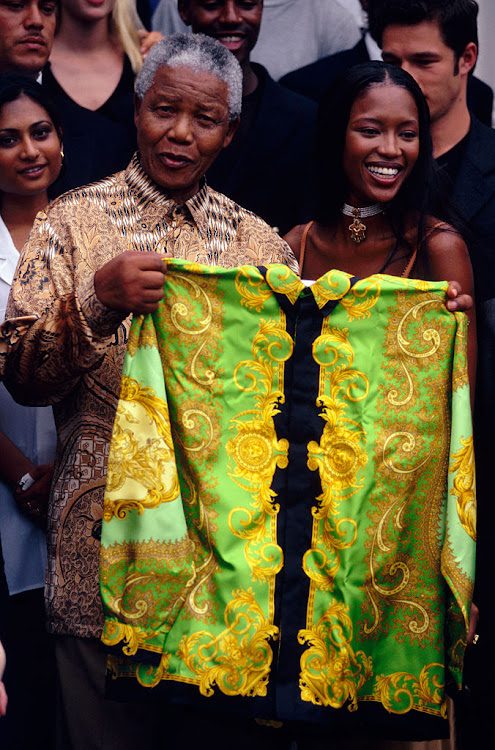 Ndamase adds: “He was given a very bright shirt, I think by Naomi Campbell.”

The model was one of many people who showered Madiba with shirts as gifts. “And Tata says: ‘Hoh! You want me to look like a peacock!”

The shirt, Ndamase says, allowed him to be at ease with “the masses” and them with him, “to stretch his hands and ... stand sometimes for a moment and say: ‘How are you?’”

Madiba brought “the freedom of dressing” to the people, he says. “Across the African continent, parliament and everywhere, they started to dress easy.”

Even before the shirts era, Madiba was a snazzy dresser, he says. “With his suits, he would turn women around.”

Buirski remembers how he would always plan his outfit and have it laid out the night before.

On the walls of Ndamase’s studio are photos of his travels with Madiba.

“Once I was stopped outside The Dorchester in London. A security guard said: ‘Do you know this gentleman you are talking to? This is Madiba’s designer. Let him in.’” He always got the “royal treatment”.

He trails his hand along rails of Madiba-style shirts — 150 are about to fly off to the UK.

“We send them all over the world. This is a reproduction,” he says, showing off an animal print shirt.

“The shirts have been copied all over the world. Everybody’s claiming the space that they are the designers of the Madiba Shirt because the man cannot speak for himself.”

Grays is now a huge multinational luxury clothing enterprise. At OR Tambo International, tourists pour into Buirski’s Presidential Shirt store, where silk shirts cost up to R5,900. She says she wants to keep the legacy of the shirts alive.

“[Madiba shirts are] almost like a relic in a way,” says Fassler. “Nobody ever quite wore them as well as Mandela did. He wore the shirt. The shirt didn’t wear him.”

• This article is adapted from one originally published in the Sunday Times on November 30 2014.