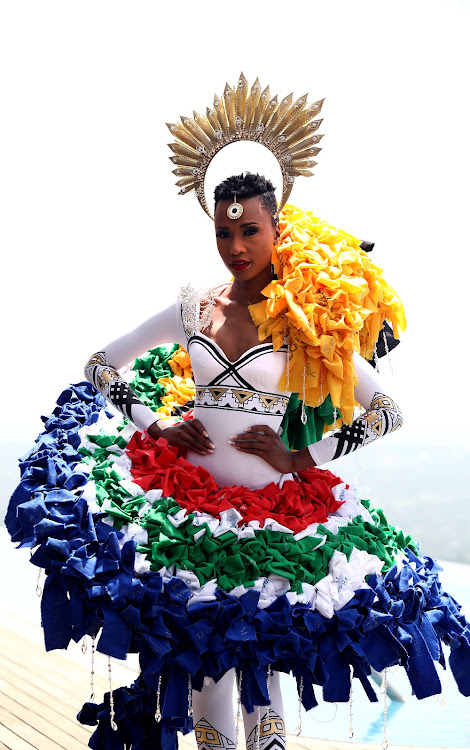 Miss SA Zozibini Tunzi on Friday revealed her Wave of Love national costume to be worn at the Miss Universe pageant.

The bold design will be worn on December 5 at the pageant gala in Atlanta, Georgia, and will showcase love letters written by men to the women of SA.

Miss SA creative director Werner Wessels said the 93 Miss Universe contestants from all over the world would be wearing creations that best represented their countries.

Earlier in the month, Tunzi asked men to write love letters on ribbons to the women of SA as part of a United Nations campaign and her ongoing work against gender-based violence.

“In what will be a first, I will literally take SA with me to Miss Universe. I will wear a wave of love from men in the form of love letters celebrating and honouring the women of this country,” she said.

On the night she was crowned Miss SA, Tunzi said: “We have absolutely no reason to keep smiling, because the country's women are dying every day, and mostly people are doing nothing about it. It is not up to us. It’s up to perpetrators to start doing right.”

Designer Lloyd Kandlin, from The Costume Department in Cape Town, said the Wave of Love costume is made up of more than 2,000 ribbons of love notes written on around 50m of recycled fabric.

"Each ribbon took about two minutes to weave into the costume. We have about 40m of spring steel holding it up so the dress weighs 10kg. A lot for her tiny frame. The crown adds another 1.5kg.

"The beads drip from the costume like little droplets, catching the eye and creating movement from the piece.

"Her body suit is corseted and incorporates traditional Xhosa, Zulu and Ndebele prints. It is simple and strong and keeps the focus on the ribbons."

The Miss Universe pageant will be aired on 1Magic (DStv 103) on December 9 at 2am.

It's all about that emerald-green doek in Zozibini's Miss Universe profile pic!
TshisaLIVE
2 years ago