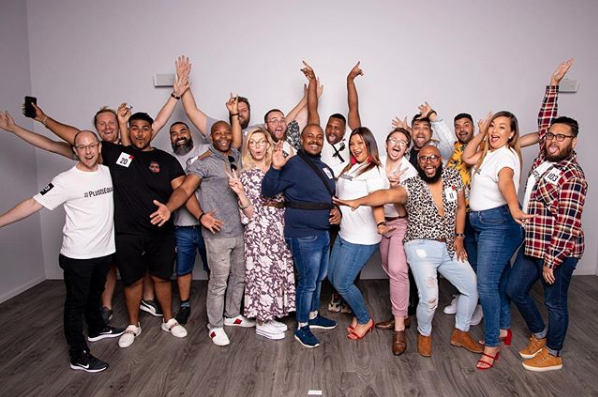 Thirteen men who are passionate about body positivity and doing away with toxic masculinity will make history on Wednesday in SA's first male plus-size fashion show. The event is part of an initiative by Red Plus Is Equal, which seeks to not only give plus-size men the boost in confidence, but to also raise awareness on insecurities they experience.

The event will be held at the Raddison Red Hotel V & A Waterfront in Cape Town, and the models will be judged by a panel of seven judges, including curve model Candice Manuel and a mystery designer who will dress them.

Mary Reynolds, producer and director of the show, says more than 60 men turned up for the auditions, which proved to be a challenge for the judges as they all had beautiful stories to share about the relationships they have with their bodies, and their passion for spreading awareness on body positivity among men.

“They were unique and dynamic. We even had to add a 13th finalist as it was too difficult to pick only 12, which was the initial brief.”

The final 13 underwent a process during which they were scored out of 50 on their overall look, confidence and walk. From then, the top 30 were chosen before  a photo shoot. The mystery designer, who will only be revealed on Tuesday night, was beyond impressed.

“My expectations were exceeded as we had regular guys coming in to cast on behalf of plus-size men. A lot of them wanted to make a stand for body positivity. We never know what someone has been through. Hearing these stories was a highlight for me.”

The event has been in the works for months. Red's Sue Levy told TimesLIVE that the idea was conceived in December last year during a brainstorming session about the 2019 event.

“The team wanted to do something in fashion but with a twist. We thought of the plus- size community and equal representation and it was a nice epiphany.”

Levy says it was important to shed light on this issue as not many people think of weight and body positivity in relation to men.

“It was important for us to give them hope that someone is thinking of them. We see overweight men but we never think of their challenges.”

She said the team ensured the entrants were secure in their bodies.

“We told them you don't need to be a model to participate.”

Lyle Curry, one of the top 13 men, said he had not been aware of the magnitude of the campaign when he auditioned. He too has struggled with his body image for years, and hopes to do away with the stigma of toxic masculinity.

“I'm a feminist who wants to challenge toxic masculinity, which I feel has some roots in self-hatred in certain men. One of the ways we can tackle this is to show men out there that you are more than just your body. You are a whole person with thoughts, ideas and dreams.”

After 13 weeks of gruelling challenges, the winners of the SABC3 presenter search have been announced
Lifestyle
2 years ago

It's not over for SABC3 presenter search runners-up

WATCH | Most awkward gender reveal ever as mom farts it out

YouTuber Paige Ginn is officially the queen of gender reveals.
Lifestyle
2 years ago