Visible mending: it's sew simple to give your wardrobe an eco-chic edge 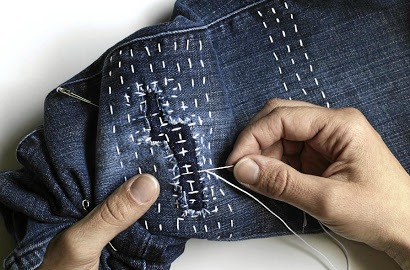 Don't hide the darned patches on your old clothes, show them off — it's all the rage!
Image: Supplied

It was a burgeoning hole in my Nike running trainers that prompted an eco-fashion awakening and led me into a fascinating subculture.

The soles — the treads — of the trainers were still in good condition, so it seemed a shame, if not unconscionable, to discard my reliable running companions. I could sense Greta Thunberg's thunder. A bit of Googling and hours on Insta to resolve my quandary delivered me squarely into the bosom of what is called "Visible Mending".

The trend sees people fixing garments, shoes, trainers and other objects rather than throwing them out and replacing them. It's next-level darning.

As the title suggests, the stitches are executed in contrast threads and bold stitching patterns — creatively rendered so as to make the mending highly visible. One mender referred to this approach as celebrating the "scars" that time had wrought on the garments, as if they were living, aging beings.

The high visibility of this kind of mending means the wearer can literally wear their eco-conscience on their sleeve and draw attention to their rejection of fast, cheap fashion, hyper-consumerism, and concern on how this has impacted on the environment.

"Visible mending has become a badge of honour. Where once mending garments indicated you were poor, now it shows people that you are Woke. Generation Z don't aspire to buying new clothing. Fashion kudos now lies in your ability to revamp existing designer items," says Walter Buchholtz, fashion lecturer at Cape Peninsula University of Technology.

Visible mending has become a badge of honour. Where once mending garments indicated you were poor, now it shows people that you are Woke

All industries have had to consider - and possibly alter or account - for their manufacturing processes or distribution and how this has impacted on the environment.

The fashion industry is grappling with its role given that clothing production is estimated to use up to 32 million Olympic-sized swimming pools of water annually, according to Fashion Revolution, an arm of a British-based non-profit organisation with chapters in countries around the world.

By extending the life of a garment "from one to two years reduces emissions of the years by 24%,"says Fashion Revolution.

Mending clothing and stretching out its lifespan also means that the amount of clothing buried in landfills is also reduced - 300,000 tons of used clothing is tipped into landfills annually in the UK. Figures for South Africa are not available.

Visible mending isn't just used to preserve an expensive item. I'm inspired to come across someone on Instagram who's mended a cheap pair of shoes from an American chain store. The fabric of the shoes has completely faded and triangles of bright orange and blue conceal or celebrate the places where holes appeared.

In this way visible mending allows consumers to personalise mass-produced items, putting their own creative spin on them and reintroducing "the handmade" — a craft element into machine-produced garments.

Menders have found this new art form empowering, allowing them to disrupt mass consumer products and patterns. They're no longer veritable cogs in the machine.

MENDING CLOTHES AS A FORM MEDITATION

"It's helped me gain self-sufficiency, taught me technical skills, connected me to my ancestors, helped me better define value and deepened my awareness," writes Katrina Rodabaugh in Mending Matters.

Mending clothing items is time-consuming, requiring an individual to sit with a needle and thread practising a form of embroidery. This is viewed as a welcome counterpoint to the high-tech, digitised virtual worlds we're immersed in daily.

"With so much noise in the world and so much pressure to consume and so many responsibilities; to simply mend my clothes feels like a quiet antidote. Like a pause," says New York-based Rodabaugh.

Whatever the "mindfulness" and eco-friendly benefits the visible mending movement delivers, it's not escaped being a "slave" to fashion. The more you flip through images on Instagram, the clearer the dominant aesthetics and trends underpinning the movement become.

Aside from the use of bright-contrast threads are the patterns and popular stitches which are leitmotifs of the movement. The stitching and mending trends are rooted in Japanese culture - as embraced by peasants centuries back. 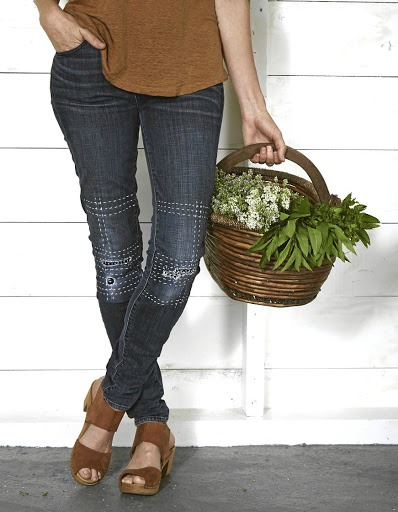 Visible mending is a creative way to give your old, tattered clothes new life.
Image: Supplied

"Rather than casting off an item that's blemished or even broken, the Japanese treasure items as being more beautiful and unique for acquiring flaws ... and quirks," writes Jenny Wilding Cardon in Visible Mending: Artful Stitchery to Repair and Refresh Your Favourite Things.

The Japanese stitching traditions of Sashiko and Boro are both defined by white thread and running stitches, while the latter encompasses the use of other fabrics to cover holes. These techniques and the use of white, running stitches in rows or patterns works well on denim and, given the ubiquity of this clothing item in our wardrobes, repairing jeans appears the most popular trend.

Jerseys or other knitwear, which often get nibbled on by moths, are common targets for the visible menders. The results are often stunning. Instead of contrasting threads, people tend to use complimentary tones, blending new colours into their jerseys, lending a sort of post-apocalyptic vibe.

The appealing and at times futuristic aesthetic tied to this movement surely makes it vulnerable to faux imitation?

It's likely that some time in the future high street chain stores will attempt to reproduce the look of visible mending in newly produced clothing, says Buchholtz. "It won't be authentic, it will be like decorative embellishment rather than repurposing a garment."

High-end international designers might take inspiration from the movement by mending rolls of fabric or discarded textiles, suggests Buchholtz.

Large retailers are already looking at ways they can cash in or ride the wave of visible mending.

"The American designer, Eileen Fisher, offers a service where customers can send in their garments to be remade with visible stitching," says Buchholtz.

Handing over your mending to someone else seems like a cop-out, given the psychic payoff everyone waxes lyrical about. It's a bit like offsetting flights by paying someone else to plant trees in your stead.

Yet I can't get a standard needle to pierce the skin of my trainers. I'm looking forward to explaining to the people at my local shoe repair shop how I want them to make the mend visible, with pink neon thread.

The movement hasn't taken off in South Africa yet. It may be a hard sell to South Africa's middle-classes, particularly Joburgers, who count shopping as a legitimate hobby. An economic downturn might encourage people to spend Saturday afternoons mending tattered old favourites rather than charging around malls in a daze.

This season, your favourite classic blue staples are reinvented for a more flattering fit and better environmental impact
Lifestyle
1 year ago
Next Article