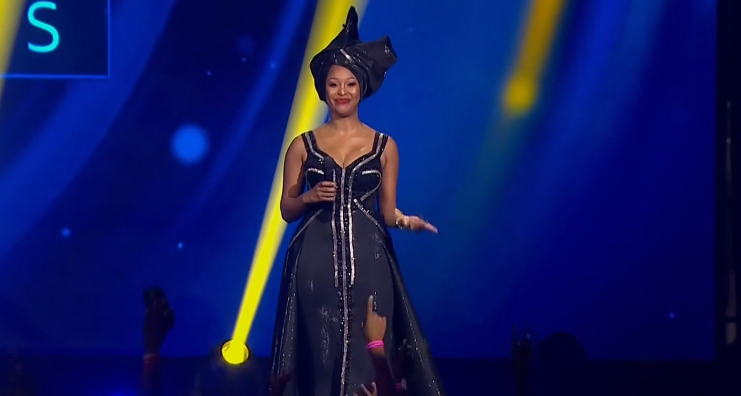 The star, who claims to have been the first local celeb to embrace the global trend of changing up her outfits during an awards show, told TshisaLIVE that she planned to outdo herself at the MCVAs — and she certainly delivered.

So much so that some fans lost track of how many times the star performed a flash change (it was eight in total). One Twitter user even declared that Mrs Jones, as she's affectionately known, “can change outfits faster than Superman”.

So Minnie Dlamini can change outfits faster than Superman

Dlamini-Jones kicked off the night on the red carpet in a sheer beaded mini dress with a dramatic ruffled train in shades of caramel and cream.

She upped the sparkle as she stepped on stage in a one-shouldered silver gown that showed off her newly toned physique. A pair of barrettes reading 'Girl Boss' added a playful touch to her sleek locks.

Featuring a high choker neckline and power shoulders, Dlamini-Jones' third dress gave off 80s vibes. Perhaps this is what prompted one Twitter user to comment that her looks for the evening felt “outdated”.

Absolutely love Minnie...BUT I honesty feel like Minnie’s stylist could have done a better job. These looks are outdated🤷🏾‍♀️ #DSTVMVCA

She followed this up with a striking black-and-silver gown paired with a matching head wrap — an ensemble which rapper Cassper Nyovest called a “winner”.

That black number on Minnie is a winner.

Nyovest — along with many others on social media — was also a fan of Mrs Jones' traditional Zulu attire. In fact, one Twitter user expressed disappointment that she'd changed out of this outfit and into the next look so quickly.

Okay, Minnie is coming with the heat now. That Zulu fit also slapped.

I would have loved to see Minnie in the Zulu outfit for a lil bit longer...... #DStvMVCA

But who dresses Minnie? And why do they hate her? This is criminal 😭😫 #DSTVMVCA pic.twitter.com/wYU8kL6fAw

Next up was a sexy red halter dress with cutouts at the waist. Though some on social media admired her look, others pointed out that it was very similar to an outfit celeb Bonang wore to the recent Sun Met.

This was somewhat unfortunate as many had already been drawing unfavourable comparisons between the two celebs as Bonang had bagged the VMCA hosting gig last year.

Minnie Maan stop it! Stop it we like it! 😭😍💕❤️👑#DSTVMVCA pic.twitter.com/SfOjdKsyuC

Mrs Jones ended the night on a light note — literally. Her eighth and final look was illuminated with tiny light bulbs. Yet another white mini, this one featured a cage-like overdress that some members of the Twitter fashion police cheekily compared to a washing basket.

Can’t believe someone cut the bottom out and put the washing basket on Minnie. I want to fight #DSTVMVCA pic.twitter.com/S5kpzD0cbs

#DSTVMVCA
Ladies and Gentlemen i am Minnie Dlamini. Goodnight pic.twitter.com/6BYaIILJTg

Best and worst dressed celebs on the #DStvMVCA red carpet

Strange, sparkly and stunning best sum up the fashion on the red carpet at the 2020 DStv Mzansi Viewers Choice Awards.
Lifestyle
1 year ago

IN PICS | From a 'coronavirus gas mask' to a fake baby bump: All the looks from #DSTVMVCA

All roads led to the Ticketpro Dome in Northgate, Johannesburg on Saturday evening as some of the biggest stars in the country hit the Mzansi ...
TshisaLIVE
1 year ago

Ever wondered what ticks Minnie Dlamini-Jones off, or what she thinks the world needs more of? We caught up with the celeb as she celebrates 10 years ...
Lifestyle
1 year ago

While Zozibini Tunzi wowed and made us proud with many of her looks, there were times when we second guessed her style
Lifestyle
1 year ago