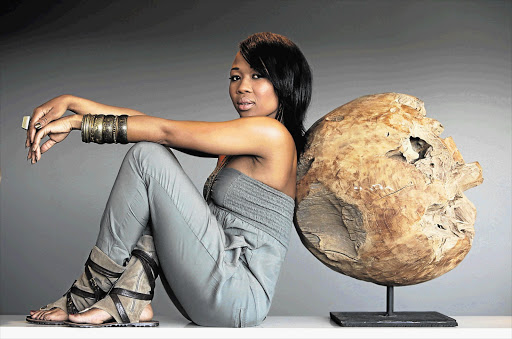 With no actual red carpet thanks to lockdown, TV presenter Dineo Ranaka hosted a "bed carpet" from home for the 14th annual South African Film and Television Awards (Saftas), which she presented live on Twitter on Wednesday.

Ranaka kicked off the evening in a pink wig and bathrobe as her gown was apparently held up in traffic. It wasn't long before she started to panic about what the Twitterverse would say if she did not host the virtual event in one of her usual glamorous looks.

Her solution to the missing dress dilemma? To fashion a fabulous outfit out of her duvet a la the #pillowchallenge that's been trending on social media.

It was less about high fashion and more about high jinks as the celeb later donned a farmer-inspired ensemble in one of her skits teaming shorts, a golf shirt, white tube socks and takkies with a safari hat.

But Ranaka's look of the night has got to be the slinky gold gown (which was apparently picked out by actress Rami Chuene via Instagram), which she paired with a glittering slip turban.

Here's what some other A-listers wore for the virtual event:

Roberto Kyle, who bagged the award for the Best Actor in a Telenovela for his role in Arendsvlei, donned a polo neck under a graphic shirt.

Former The Queen actresses Dineo Langa, Motsoaledi Setumo and Chuene got all glammed up to support their ex-co-star Loyiso MacDonald as he scooped the award for Best Supporting Actor in a Telenovela in the aforementioned show.

We are red carpet ready!!! Done up for the man of the hour @loyisomacdonald. Family ties @_Motsoaledi @ramichuene We are ready for our Loy to take it home. Now switch on the thing @SAFTAS1 tlhe pic.twitter.com/xFnE1TcMIU

Makeup done! What kind of sister would I be if I didn't come correct for your special day @loyisomacdonald? It's my brother's SAFTAS night lona. Really hoping he takes this award home pic.twitter.com/Iye3q0TnuK

Ready for the SAFTAS! Wishing @loyisomacdonald the best of luck for tonight!! ♥️♥️ pic.twitter.com/Xd3iXxVrpw

iThemba's Brenda Ngxoli won the Best Supporting Actress in a TV Drama award; she rocked a jacket with faux fur collar adding a touch of elegance with a pair of pearl earrings.

The full list of winners from this year's South African Film & Television Awards, which were held online due to the outbreak and hosted by Dineo ...
TshisaLIVE
2 years ago

IN PICS | From Linda Mtoba to Liesl Laurie: celebs are loving the #PillowcaseChallenge

SA's celebs may be on lockdown, but this hasn't stopped them from dressing up — even if it means using their pillows as high-end couture.
Lifestyle
2 years ago

Your dustbin goes out more than you do, so why not dress up for the occasion?

Thanks to Bin Isolation Outing, garbage day has never been so glamorous
Lifestyle
2 years ago