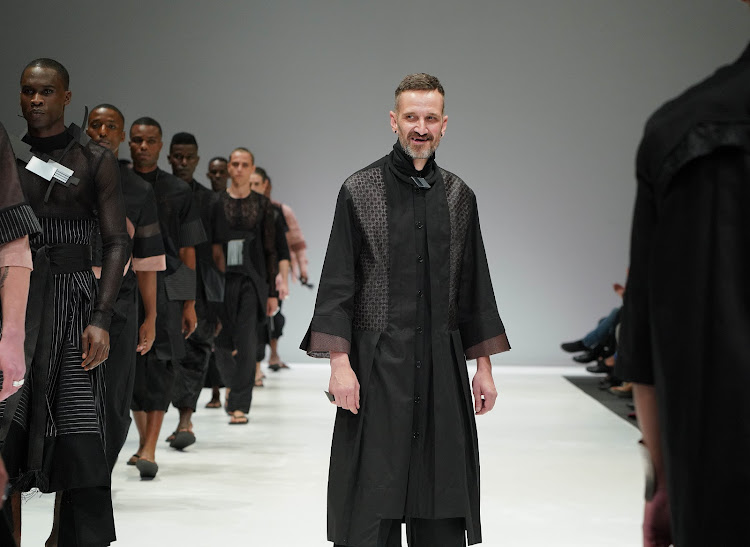 When he established his label, De Mil, in 1997, the designer specialised in bridalwear and theatrical costumes. A decade later, he shifted his focus to menswear and later became known for his cutting-edge gender neutral collections.

"Coenraad was a kind and gentle designer with deeply personal work who always challenged convention. A master pattern maker, this is a huge loss for fashion," said Sunday Times Fashion director Sharon Becker of his passing.

“Coenraad was a highly gifted and knowledgeable industry leader who derived great joy from the creative process,” wrote SA Fashion Week CEO Lucilla Booyzen in a tribute post on Instagram. She added that he was a “perfectionist” who was “exceptionally generous with his expertise”.

Commenting on the post, designer Michael Reid of Xavier Sadan said: “This is a huge loss for the industry. He was one of the most knowledgeable people I knew and the best mentor anyone could’ve asked for.”

"I remember meeting Coenraad at his studio and instantly being overwhelmed with his graciousness and warm smile. You thrived in his presence, you wanted to be the best version of yourself when you were around him. His creative brilliance and overwhelming kindness was an incredible part of our industry," recalls Sunday Times Fashion editor Sahil Harilal.

While TV director Paul Tilsley shared on Twitter that “a real creative force” had been lost to the world.

"Detailed tailoring", face masks and drama were the order of the day as local fashion legend David Tlale digitally debuted his Autumn/Winter 2020/21 ...
Lifestyle
2 years ago