Something old, something new, something borrowed, something blue — Britain's Princess Beatrice was able to tick all these bridal must-haves off the list courtesy of her grandmother, Queen Elizabeth II, when she wed property developer Edoardo Mapelli Mozzi on July 17.

The something old was one of the Queen's own vintage gowns, which Beatrice picked in favour of a new wedding dress. It was originally designed by Norman Hartnell; her majesty wore to it the premiere of the movie Lawrence of Arabia in 1962, and again for the opening of parliament in 1967.

It became the bride's something new when Beatrice upcycled it by modernising the hemline and adding organza sleeves. Made from Peau De Soie taffeta, it's trimmed with ivory Duchess satin and embellished with beading and diamantés.

The dress, along with the Princess's tiara, were her something borrowed. In a sweet twist, the headpiece, which is known as the Queen Mary diamond fringe tiara, is the same one Elizabeth wore when she married her own husband, Prince Phillip, in 1947.

The something blue is, of course, the royal blood that flows through Beatrice's veins. As the daughter of the Queen's second son, Prince Andrew and his ex-wife Sarah Ferguson, Beatrice is ninth in line to the British throne. 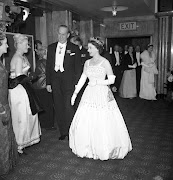 Image: PA Images via Getty Images Queen Elizabeth II in the Norman Hartnell gown at the premiere of 'Lawrence of Arabia' in 1962.

Image: Hulton-Deutsch Collection/Corbis via Getty Images Queen Elizabeth, then a princess, and her husband, Prince Phillip, on their wedding day in 1947. The tiara she is wearing was worn by the couple's granddaughter, Princess Beatrice, when she tied the knot on July 17.

Beatrice, 31, and Edoardo, 37, had been due to tie the knot at London's St James's Palace on May 29, but they put their plans on hold because of the coronavirus pandemic.

No rescheduled date was given, instead the couple surprised the world by getting married in 'secret' at the Royal Chapel of All Saints at Royal Lodge, Windsor.

According to a statement from the royal family, “The small ceremony was attended by the Queen, the Duke of Edinburgh (Prince Philip) and close family. The wedding took place in accordance with all relevant government guidelines [regarding Covid-19].”