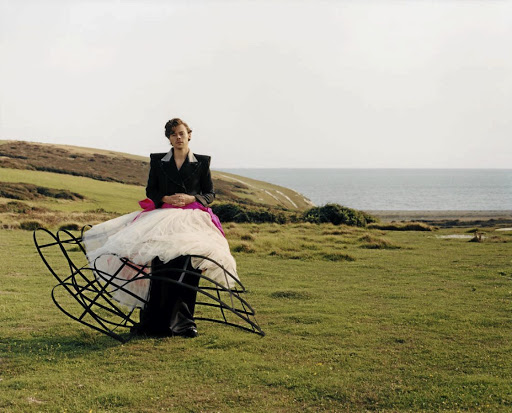 Gender-bending Harry Styles is the first male to appear on the cover of Vogue magazine.
Image: Supplied

When Vogue announced its December cover featuring a gender-bending Harry Styles, I had my reservations. Styles is a good-looking young man, and his gender-bending is cute and all, but I can't deny how triggering it sometimes is to see a cisgendered male celebrity being lauded for something that often provokes violence on the bodies of people like myself.

Gender non-conformity is more than just an aesthetic; it's an extension of who I am in a world that often seeks to invalidate my identity. I don't get celebrated as being "brave" for simply being myself in a world that would prefer that I wasn't, but I digress.

When conservative commentator and Trump cheerleader Candace Owens attacked Styles for wearing a Gucci gown complete with lace and ruffles, I started thinking there might be some value to both her argument and Styles's historic turn as the first man to appear on the cover of Vogue on his own.

In case you missed it, Miss Owens believes, as per her tweet following Vogue's unveiling of the cover: "There is no society that can survive without strong men. The East knows this. In the West, the steady feminisation of our men at the same time that Marxism is being taught to our children is not a coincidence. It's an outright attack. Bring back our manly men."

She's so right! Masculinity — and civilisation by extension — is so frighteningly fragile it depends on men wearing pants, definitely not indulging in skin care (so gay). God forbid a man moisturises his ankles or cleans his butt-crack. We're all going to die!

From the metrosexuality trend of the early 2000s to mainstream culture's increasing embrace of queer culture, we've seen this steady decline of masculinity threatening the very fabric of who we are as a society. I'd like to locate this onslaught on conservative values exactly where it begins — with the delusion that women can be equal to men.

From suffrage to women entering the workplace demanding jobs beyond being some dude's keyboard-crunching, diary-keeping maiden, men were forced to suddenly participate in unmanly activities like child-rearing, cooking, cleaning and dressing themselves in the absence of domesticated women whose sole priority in life was being good women to their husbands, good mothers to their children and punching bags for men who prefer reacting violently to the questioning of their inherent, manly authority, and stress.

With women clamouring for high-powered positions and a seat at the table, as it were, suddenly a good old grey suit would not do for men. They started wearing pink shirts and multi-coloured socks. That's the abomination that forced them to start looking at each other as they would women — as potential romantic partners — because, you know, bright colours and a little styling are the triggers of homosexual desire.

The same became true of women. Free from the chains of domesticated bliss, women started realising they might have value beyond the kitchen and were thus probably in no rush to give some man a child to validate his manhood by making him a father — the most important of all things she can do as a woman in life. Unshackled from the manacles of good womanhood, many women started to openly embrace their sexuality. Not good!

It's quite demeaning to women all over when a woman can freely express her sexual desires. We should all be glad about the conservative crusade against such women, as we saw recently with rappers Cardi B and Meghan Thee Stallion after they released their hit single WAP.

"Beat it up, catch a charge/ Extra large and extra hard," Cardi raps.

If you think that's unconscionable, try this for size: "Gobble me, swallow me, drip down the side of me/ Quick, jump out before you let it get inside of me."

You get the idea. How dare they feel so empowered and in charge of their own bodies, that they can subject us all to this lewd language of their disgusting sexual fantasies?

Only manly men can do that.

This scourge of "equal rights" and agency meant men's power to demand a home-cooked meal every night after a long day of breadwinning was fast dwindling. His role as "the man of the house" was rendered obsolete as women also became breadwinners and — God forbid — the masters of their own destiny.

Worse still, as men began to question their own identity, many started questioning and altogether abandoning principles like the unwritten manly-man's law that boys don't cry.

If we are to believe that a simple choice like wearing whatever feels good on one's body opens us up to the destruction of good values, there's a whole debate to be had about what those values are.

In the case of Donald Trump's favourite darkie Candace Owens, it seems pretty obvious that a society that people like herself value is one where people's identities are predefined and fixed.

Their freedoms are guaranteed so long as they don't rock the boat or make their fellow man uncomfortable by being comfortable in their own skin. What else is one to conclude in the absence of evidence that a man wearing a dress takes away the next person's right to live their own life as they see fit?

New #VogueChallenge forces us to rethink our relationship with nature

Does the return of menswear shows spell the end of gender-fluid fashion?

After years of designers hosting 'co-ed' fashion shows, runway presentations dedicated solely to menswear are back in style. Here's why, writes Paula ...
Lifestyle
1 year ago

Vogue Italia has apologised for any offence caused by the cover which has been criticised since it was revealed on Friday.
Lifestyle
1 year ago