The moss shoe is an idea of what the future of footwear could look like, says creator Matthew Edwards 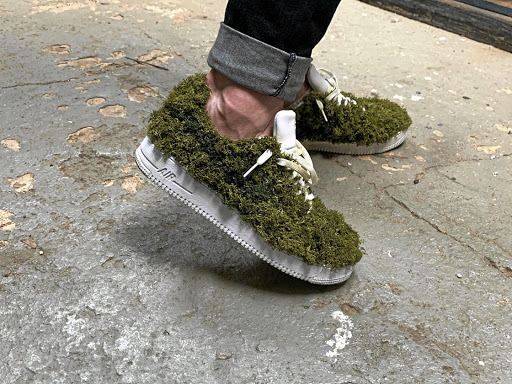 The moss shoe highlights that there is an alternative to the footwear industry, a particular culprit in overconsumption and waste.
Image: Supplied

Speculative designer Matthew Edwards is on the path towards becoming one of the more significant local influences in this sphere, not least of all, it seems, because he doesn't shy away from the stuff of flagrant eccentricity.

One of his most joyful and compelling offerings to date is his "moss shoe", which began as "a simple studio test" and morphed into something marvelously uncanny.

Says Edwards: "The moss shoe is an idea of what the future of footwear could look like. The idea was to create a living shoe based around the principles of growth, care, regeneration and, ultimately, decomposition, through the fragility of the material and the inescapable wear and tear of our objects.

"These are things that aren't often associated with clothing or footwear — I wanted to create something that started a conversation in the space. The shoes met with varied responses: some people found them uncomfortable to look at, let alone wear.

"The moss shoes fit into an interesting space: as we become more aware of our impact on the planet (particularly the footwear industry), we have to replace our overconsumption and destructive habits with ones that waste less and are regenerative.

Beyond being good for the planet, Lara Klawikowski believes using sustainable materials makes her pieces more thought-provoking and visually powerful
Lifestyle
11 months ago

"I see the shoe existing in the future, following the strong precedents set by researchers looking at real material developments like mycelium (a material made from mushrooms and their spores), bioplastics, vegan leathers and regenerative fibres.

"The reindeer moss, sourced from Scandinavia, is hand sewn into a mesh material which is then sewn onto the shoe panels. The moss is dormant, but it needs to be kept moist to avoid it drying out and dying.

"The idea of a growing shoe appeals to my vision of the future of design, which is feeling less sci-fi and more achievable than ever. At this moment the moss shoes will live as reminders of where we could go if we put our energy into materials."

Matthew Edwards' 'New Projects: Johannesburg's Material Future' is an ever-growing library of fascinating objects that once were junk
Lifestyle
11 months ago

In a bid to move away from producing environmentally unsustainable and unethical textiles, fabric innovation has taken a front seat in the fashion ...
Lifestyle
1 year ago

Clothing is armour and I arm women to be their best, says designer Sindiso Khumalo

The award-winning 'green' designer talks about the glass ceiling for young, black creatives and her big plans to sell in a UK store next year
Lifestyle
1 year ago

Environmentally conscious fashion was the winner at the Sustainable Fashion Awards — but so were these designers ...
Lifestyle
1 year ago