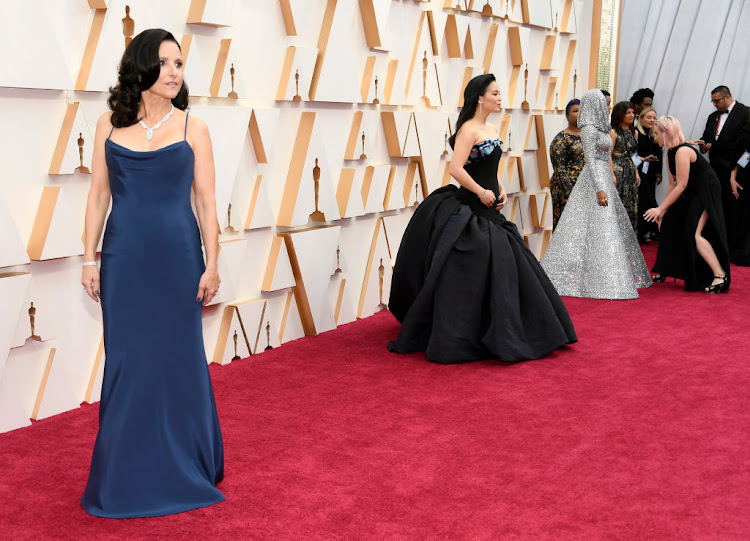 Looking through a rack of colourful evening gowns, celebrity stylist Cristina Ehrlich pulls out a shiny black and chrome frock she describes as a classic red carpet look.

“The actual design of the dress is very classic and simple,” Ehrlich says. “This is the perfect kind of dress for an evening like the Academy Awards because you can do so much to what we call style it out.”

Ehrlich, who has dressed the likes of Laura Dern, Tina Fey and Julia Louis-Dreyfus, expects to see plenty of glitz and glamour at Sunday's Oscars, when celebrities will gather in person at Los Angeles' Art Deco Union Station and by satellite links to venues outside the US, capping a virtual awards season due to the Covid-19 pandemic.

The producers of Hollywood's biggest night say they plan an intimate gathering for nominees, presenters and their guests, with no Zoom dial-ins. They have asked attendees to dress up, forgoing the casual wear some have worn while joining by video from home at other events.

“The Academy Awards are really touted as one of the most important sparkly nights delivering glamour,” Ehrlich, who is dressing a celebrity for an Oscars party, said.

Producers ‘want the show to have a voice’.
Lifestyle
4 weeks ago

Among Ehrlich's selection of dresses are classic intricately embroidered gowns, sparkling sequinned dresses and a tailored suit — looks she expects to see at the Oscars.

With no red carpet to walk down so far this awards season, many celebrities have dressed up and posed — sometimes in their gardens — for pre-event shoots.

February's Golden Globes saw nominees seated in front of screens in an array of colourful, show-stopping frocks — as well as in pyjamas and sweatshirts — while at this month's British Academy of Film and Television Arts awards (Baftas), where only awards presenters walked down a pared back red carpet in London, fashionistas noted more sleek, classic-looking gowns.

“As the Oscars approaches, the mood seems to favour instead a classic, no-frills approach to getting dressed for film’s biggest night of the year,” British Vogue senior news editor Alice Newbold wrote.

"[The Bafta] ceremony at an empty Royal Albert Hall certainly gave pause for thought and put the emphasis squarely on talent, while reminding us of the joys of cinema.”

Women filmmakers get in on the action, but at what price?

Female directors are breaking down the doors of the boys’ club, but they may be sucked into the franchise machine
Lifestyle
1 month ago

Award shows are taking place virtually this year, but that is not a reason to skimp on style
Lifestyle
1 month ago
Next Article