It may have been fabric, not food, that advanced human evolution 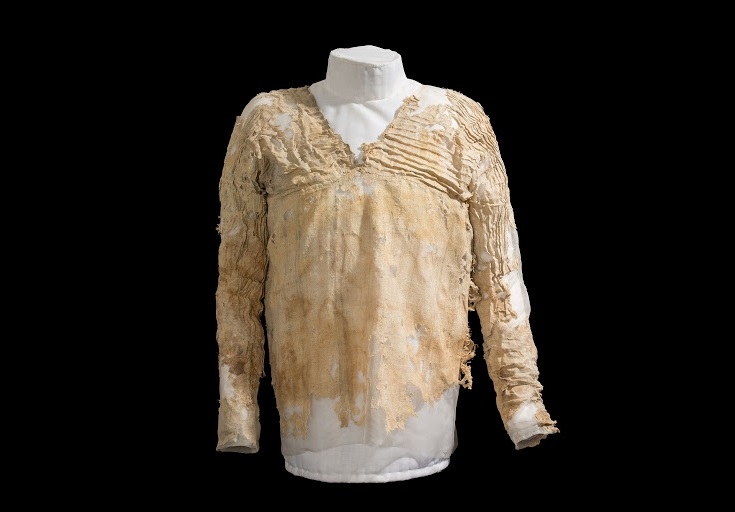 The Tarkhan dress is the world’s oldest known woven garment, with radiocarbon testing dating it to the late fourth-millennium BC.
Image: UCL Petrie Museum of Egyptian Archaeology

One of the enduring mysteries of humanity is the sudden and irrevocable move to an agrarian lifestyle. Why did we start farming? We had it pretty good before that. A recent paper shows that hunter-gatherers had significantly less famine than agriculturalists.

Two years ago research showed that early agriculture, which spread from 10,000 years ago in the Near East and took several more millennia to become a "global" phenomenon, exacted a steep price in human health and labour, with farmers barely staying one step ahead of starvation.

Never mind everything else it led to - urbanisation, technology, global trade, patriarchy, class structure, the nation state, empire and all the other attributes of the Anthropocene era - whose climactic consequences we are living through today.

THE EYE OF THE NEEDLE

So if, as English philosopher Thomas Hobbes put it, this agrarian lifestyle was nasty, brutish and short, what would possess us to make the change? And, no, it wasn't a charming and deceptive snake leading us out of Eden. Although shame appears to have a small role to play (but more on that later).

Ian Gilligan, a prehistorian at the University of Sydney and the author of Climate, Clothing, and Agriculture in Prehistory: Linking evidence, causes, and effects (2019), has a theory: we were feeding our need to clothe ourselves.

With every dip and rise in the general temperature as we moved through repeated ice ages and the subsequent thawing, our need for clothing shifted.

In an essay in Aeon magazine, Gilligan says: "Archaeologists and other scientists are learning why our ancestors first started to wear clothes, and how their adoption was crucial to the evolutionary success of our ancestors when they faced climate change on a massive scale during the Pleistocene ice ages. These investigations have revealed a new twist to the story, assigning a much more prominent role to clothing than previously imagined."

What's clear in the archaeological evidence is how the use of the eyed needle came and went with every ice age. A kind of domesticated 50,000-year-old leitmotif, the use of the needle shows that people across the planet were making clothes that fitted their limbs so that they could preserve warmth. We dispensed with the needle in warmer times when we didn't need to layer. 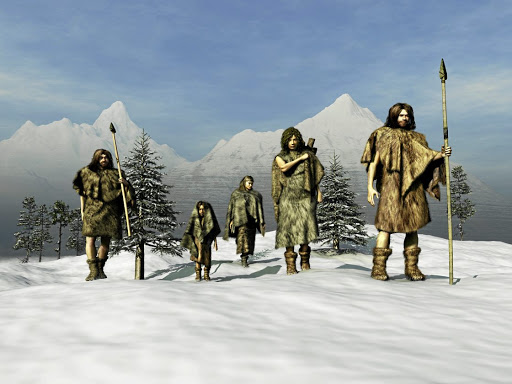 An artist's impression of ice age people in furs and skins.
Image: 123RF/Estt

"Later, during the coldest stage of the last ice age, Homo sapiens in middle latitudes devised multi-layered outfits with an inner layer of underwear. Equipped with effective protection from wind chill, our species could penetrate into the frigid Arctic Circle, further north than cold-adapted Neanderthals had managed to venture.

"From the Northeastern corner of Siberia, modern humans strolled across an exposed land bridge to enter Alaska by 15,000 years ago, if not earlier, to likely become the first hominins to set foot in the Americas. At the Broken Mammoth site in Alaska, archaeologists have unearthed the fragile technology that made the journey possible: a 13,000-year-old eyed needle."

Research into the lice genome shows that head lice and clothing lice split 100,000 to 170,000 years ago, which is when we first started wearing the clothes that could harbour the parasitic little blood suckers.

But research also shows that something different happened on the way out of the last ice age: "Global warming prompted people in many areas to change their clothes from animal hides to textiles. This change in clothing material, I suspect, could be what triggered one of the greatest changes in the life of humanity. Not food but clothing led to the agricultural revolution."

What isn't clear is why, instead of returning to our natural state, which appears to have been the case in previous warm periods, we chose to continue to clothe ourselves.

IT BECAME THE FASHION

"Once clothes replaced body painting for personal decoration and display, the need to wear clothes was uncoupled from climate. From that point, body covering was maintained by social and psychological motives, including an emergent sense of modesty or shame about exposing the naked body, presumably as a consequence of routinely covering the body."

Once clothes replaced body painting for personal decoration and display, the need to wear clothes was uncoupled from climate

As for textiles, there may have been a practical concern - the new weather was warmer but also wetter, and linen and cotton are better at wicking away sweat and damp than furs and leather are.

You can still see some of these first examples of sartorial splendour. There is a pair of 3,000-year-old pants worn by Attila the Hun's nomadic horse-rider ancestors in Central Asia, and a 5,000-year-old linen tunic from ancient Egypt. From about 10,000 years ago we have cloth fragments from Peru and Turkey. And the oldest fibres are twisted flax - a piece of string from a 34,000-year-old site in Georgia.

The archaeological evidence shows that many Neolithic societies continued to rely on foraging for much of their food supply, sometimes for thousands of years after they adopted agricultural practices. It took thousands of years of artificial selection to get the high seed yield of our major cereal crops like wheat, rice and corn, says Gilligan.

"The wild progenitors were poor food choices, at least for human consumption. Wheat was just one among a group of early southwest Asian crops. Together with flax (cultivated for linen), there was barley and rye, both fodder crops, along with legumes like lentils, broad beans and chickpeas. The herding of sheep and goats began around the same time, and [the animals] were fed on cereal grasses and legumes to provide a renewable fibre resource for textiles.

Whether it's to help end a health crisis - or keep pesky suitors at bay - clothing has long been used to help people distance themselves from others, ...
Lifestyle
1 year ago

"Fibre production can explain why people would bother taming and feeding the animals rather than simply killing them for meat. Sheep produced wool - and goats produced wool-like fibres - for as long as they were kept alive, making them more valuable as living fibre factories than as dead carcasses. In other words, these species served as walking wardrobes, not walking larders. A more obvious choice for meat was cattle, but sheep and goats were the earliest animal species to be herded."

It's a compelling argument that puts clothes at the centre of our evolution. Gilligan's conclusion is that clothes really do make man: "The development of clothing spurred technological innovations that have expanded and transformed the human world in many ways. Clothing has become an indispensable aspect of being human, starting with complex clothes in the coldest phases of the last ice age.

"As the naked skin was concealed more completely and continuously, clothing replaced the naked skin for personal adornment, and clothes became a substitute surface for social display, in the process engendering an unnatural sense of shame about nakedness. Then, after the ice age, natural global warming prompted the shift to textiles, a catalyst for agriculture and the Industrial Revolution, two transitions that together have driven humanity further from nature and facilitated the fabrication of the modern world."

Glow up, guys: Men have been wearing make-up for centuries

Up until Victorian times, men wearing make-up was the norm. Now the practice is making a comeback
Lifestyle
8 months ago

Women in battle dress: how clothes have been used as a form of protest

When Tshegofatso Pule was found stabbed to death and hanged from a tree in June, South Africans were overcome with grief.
Opinion & Analysis
1 year ago

As housebound women hang up their undergarments in the wake of the pandemic, we look back at the controversial history of the bra
Lifestyle
1 year ago