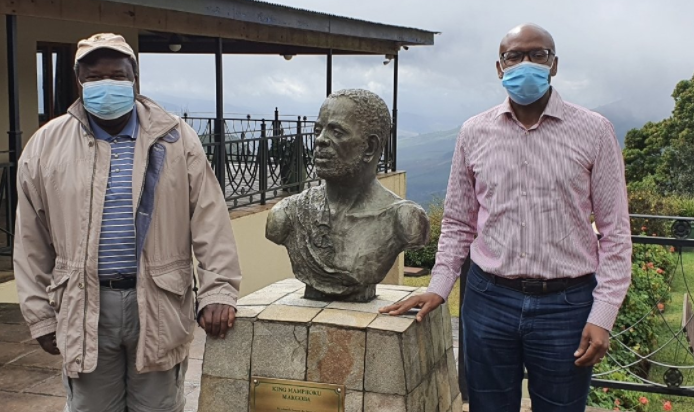 The African Transformation Movement’s Mzwanele Manyi met with finance minister Tito Mboweni this past weekend to “experience the Eden of Limpopo”, but ended up becoming the talk of the town for his and Mboweni’s shoe game.

Manyi posted a snap of himself with the minister at Magoebaskloof Hotel.

“I thought today I should experience the Eden of Limpopo, Magoebaskloof. I bumped into a prominent resident of the area at Magoebaskloof Hotel: honourable finance minister Tito Mboweni,” he wrote.

While some applauded him for visiting the area, many weighed in on the minister’s outfit and joked that Manyi should not go to Mboweni’s house for dinner.

One cheeky follower had the TL laughing when they tweeted “It’s not Tito until we see the shoes”.

Manyi responded to the request by posting a full-length picture of the pair with their shoes on display.

Mboweni shared the picture, encouraging the debate over who wore better footgear.

In the end, both politicians were dragged, with the Twitter fashion police going in hard.

For the first time your safety boots are much better. Your friends shoes are bed. pic.twitter.com/GcujpK7nuC

Shoes we see them, the trouser papa is it a phalaza😂😂

Workers will never get any salary increase from a Minister with shoes like these.

"I just see tin fish that went to politics," said one follower.
Lifestyle
4 weeks ago

LOL! Tito Mboweni says all he wants this festive season is a new pair of shoes

One follower said the finance minister will have to do with flip flops, while others said he should focus on more important issues than a pair of new ...
News
5 months ago