From the chic to the influencer era: The rise and fall of the Met Gala

Image: Dimitrios Kambouris/Getty Images for The Met Museum/Vogue All the glamour and none of the gild. Pete Davidson and Kim Kardashian at the 2022 Met Gala.

From 1948 to 1972, the Metropolitan Museum was home of the Met Gala. The old affair was not much of a crowd-pleaser until Vogue decided to cut the excess and glamour of then editor-in-chief Diana Vreeland.

With her expert knowledge of fashion and firm pulse on celebrity culture, Vreeland went from editor to creative consultant of the museum and sought to give it the kind of makeover the character based on her gives in Funny Face. Her approach to the costumes in the museum meant to bring in the crowds were detailed in her many biographies as a triumph.

But it was the annual Met Gala that would really sell the show with its glitzy and glamorous A-listers. The tradition has stood the test of time and even survived lockdown. While more attendees saw the advantage of dressing to the nines in previous years, the Gala has lost appeal and credibility over the years.

Now that we are more likely to see some of the best costuming at Halloween events or in a Beyoncé visual album, here’s a look at the decline of the Met Gala’s red carpet since the glory days of Vreeland.

Image: Photo by Anwar Hussein/WireImage Princess Diana arrives at the 1997 Met Gala in a chic ensemble.

Tom Ford famously lambasted the event in an excerpt from Anna Wintour’s upcoming biography where he said it was always about arriving at the event in chic clothing and to see beautiful historical garments.

He certainly was not lying.

During the Vreeland years from 1973 to most of the Wintour years beginning in 1995, attendees often wore a mix of custom or already existing designer garments.

In 1997 Vogue upped the ante when they hosted the Gianni Versace tribute  honouring the designer’s death. While there was much excitement about that year’s event, attendees were still not outlandish in what they wore.

While there were many excessive trends that were popular in the early 2000s, there was also an appreciation for dressing down. Something that could be seen in the efforts of stars including Kirsten Dunst, who opted for a black Marc Jacobs gown paired with a Missoni beanie. While this would not be an odd sight on the designer’s runway today, it was the last thing you would expect to see on the gala’s red carpet.

While others including Iman and Kate Hudson took a more modern approach to the theme, things would start to change at the Costume Institute’s annual shindig as the age of bling took over.

Image: Photo by Gucci via Getty Images Modern yet Grecian, Kate Hudson's look at the Goddess-themed gala in 2003.

Understanding the atmosphere of any decade or year helps bring a lot of context to how fashion seasons or trends can be affected. When it came to the Costume Institute there was no exception.

By this time designers like Zac Posen were rock stars in their own right, partying like them as well. All eyes were definitely on him and many others in attendance at the 2004 game-changer “Dangerous Liaisons: Fashion and Furniture in the 18th Century” in a Halloween-ready regal costume. But he was not alone. Amber Valletta wore a Marie Antoinette look with punk inspiration.

It was also easier to honour the themes between 2005 and 2007 as they were a mix between designers like Chanel and tapped influences of British fashion. As the recession of the late 2000s kicked in, celebrity culture doubled up on the glamour.

This was not only in the stores and runways of the time but on the red carpet as well. At 2008’s “Superheroes: Fashion and Fantasy” evening, typical Met themes would arise. Some celebrities would put effort in their interpretations, including Naomi Watts, while others would disappoint in lacklustre attire, such as actress Lily Coleman, and others would go to baffling extremes, including Kimora-Lee Simmons in a Ndebele print dress designed alongside Andre Leon Talley and Kevan Hall.

The power of the Met Gala not only established the who’s who of that year but also established the top designers. It would come as no surprise that Azzedine Alaïa would pull out from attending 2009’s “The Model as a Muse: Embodying Fashion” event due to his strained relationship with Wintour. This was a boycott in which his muse, Naomi Campbell, would participate until 2011.

While reflecting the rising markets of its time, the ball has also proven a powerful force in influencing streetwear trends.

With more efforts going into creating an unforgettable experience for those in attendance, the Met Gala became a costly affair to produce. Ticket prices in the 1970s and 80s were $1,000, rising by another $1,000 in 1998. After its two-year hiatus, the ticket prices rose to $3,500. By 2016 you could purchase a ticket for a table of 10 for $250,000 or come solo for $25,000. Today one ticket costs $30,000 (about R474,000). A considerable change and no shocker considering this important red carpet event features influencer guests invited by designers. 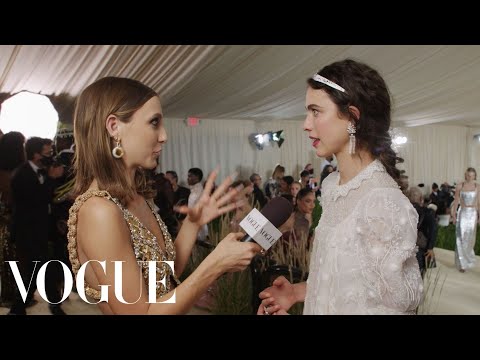 With celebrities like Beyoncé taking the reins with their career trajectory, attending this event was becoming pointless, whereas those in attendance did not have to pay for a ticket since they were being paid for by brands and organisations that benefit from the advertising opportunity these stars afford them.

This is especially the case with influencers like Margaret Qualley who was one of Chanel’s attendees. When asked about her outfit in the first portion of this year’s theme, she could not give a clear answer about how it connects nor about its relevance. Instead, she said her inspiration for the show was Chanel, wearing a recent look that references the French roots of the house rather than its practical years best defined by the working women of America.

With the red carpet display consumed instantaneously on social media it made it easier for critics to point out appropriate themes and red carpet outfits, as seen with Cara Delevigne’s uncredited “peg the patriarchy”.

The outrageous costumes also created a problem with stars not being recognisable to paparazzi, so their media attention would be a complete flop due to late coverage, if any was given at all.

THE FUTURE OF THE MET GALA

With Vogue’s call for gilded glamour at this year’s gala, there was a push towards guests bringing a much more sophisticated approach to the red carpet. While we could all argue whether this was successful, it has opened a new era of the gala that sees the importance of modernising the theme to best fit the current age.

The Costume Institute’s chief curator, Andrew Bolton, told Vogue France themes are picked on topics that are timely, or a cultural shift that is happening or about to happen.  While the museum is at liberty to pick what it believes is worthy of a discussion, perhaps it's time the Vogue team and Wintour found a creative way to encourage attendees to spin current runway trends with the conversation happening inside the Metropolitan’s walls.