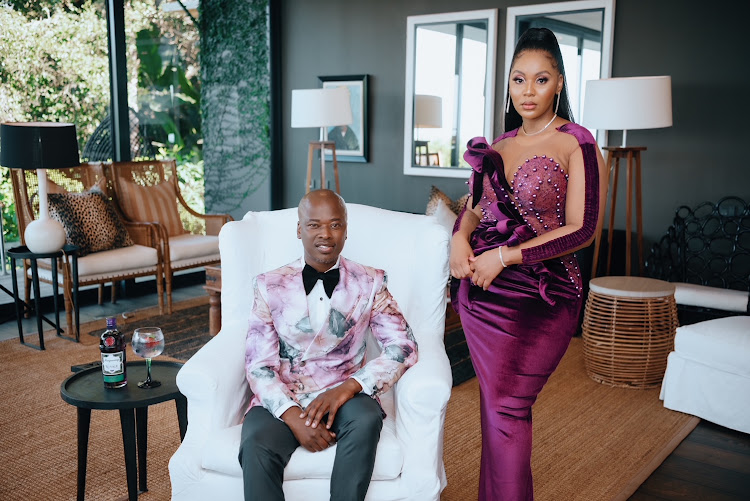 From runway to red carpet, Otsile Sefolo, most known for his haute fashion brand Otiz Seflo, has been one of the most watched local designers. Which comes as no surprise that he was one of the most wanted for this year's Durban July.

This year's Durban July was themed “show me the honey” which called for regal looks inspired by all things floral and gold. With Tanqueray launching its Blackcurrant Royal, the designer married the two through his designs.

“I tried playing around with the shape of the bottle and the accents you get from it,” said Sefolo, speaking of the looks worn by Mbali, Mtanga and Sithole.

“With Pam I went with white because the bottle leaves a clearness at the top which you can see with the crystal pearls. With Mbali I went with a deeper grape which I got from the actual colour of the alcohol when it's in the bottle.”

While the colours might be great as is, Sefolo was inspired to embody the colour of the alcohol in a glass for Sbahle's look.

“Once you put it in a mixer, the colour changes — it becomes lighter. It gives you a bit of a rose gold,” he said about his vision of capturing the different shades of the Tanqueray gin.

For the men's wear, Sefolo dressed Gwejela in a look that ties all the looks together through his chosen colours while Chinyani wore white with leather accents.

“I wanted more of a gentleman's look for Tino and I played around with leather to give it a more masculine feel.”

About 35,000 people set to soak up food, fashion and fillies at the Durban July

At least 35,000 people are expected to descend on the Greyville racecourse for the iconic Durban July on Saturday.
Lifestyle
1 month ago

How this style star made taxi rank fashion go viral

Combining the traditional with the modern, marketing maestro Bafana Mthembu has created an enviable look.
Lifestyle
1 month ago

SNAPS | Best and worst dressed! Here's what your faves wore at #DStvMVCA

Some tweeps said the looks from the #DStvMVCA blue carpet were screaming "2002"... what did you think? Did anybody understand the assignment for you?
TshisaLIVE
1 month ago