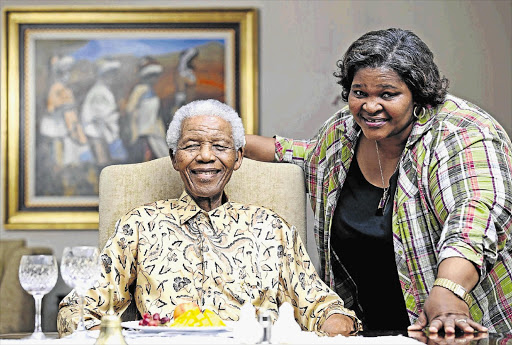 Ndoyiya’s delicious concoctions have now earned her a spot on an international food series on television called A Taste of South Africa‚ being filmed locally and hosted by celebrity British chef Matt Tebbutt.

The 10-part show features Tebbutt travelling through South Africa‚ looking at the history of ingredients and recipes of local favourites like shisa nyama‚ bunny chow‚ piri piri‚ koeksusters‚ waterblommetjie bredie and many more.

It will also see Tebbutt unpacking the history of South African cuisine by speaking to and cooking with well-known local chefs like Ndoyiya‚ Portuguese food expert Mimi Jardim and Mpho Tshukudu‚ co-author of the best-selling cook book Eat-Ting.

A Taste of South Africa - produced by the Oxyg3n Media who made Married At First Sight SA - has already been snapped up by Discovery Channel and British network UKTV. It is expected to be aired later in 2017.

Ndoyiya will prepare one of Mandela’s many favourite traditional dishes Umphokoqo - crumbly maize meal with sour milk - on the show.

“I am proud to share our food and our history with people in other countries. I loved meeting Matt‚” said Ndoyiya.

“I enjoyed talking about my time in Mr Mandela’s kitchen. In the show I make very simple ukudla kwasekhaya (home food) ‎but I hope Matt saw the love and care I put into my food.

“It was classic traditional tastes that don’t appear in restaurants - they have to be made with home love.” Ndoyiya‚ author of Ukutya Kwasekhaya: Tastes from Nelson Mandela’s Kitchen‚ started working for Mandela in 1992.

In a Q&A with the Nelson Mandela Foundation‚ Ndoyiya said Mandela hired her almost instantly as his chef when she told him she cooked home food.

“I am so thankful that I have had the opportunity to contribute to his life. I was a baby when Madiba went to jail and‚ without his long walk‚ my life and the lives of all South Africans would have been so much worse. I feel privileged to have fed him as president and private citizen‚” she said in the Q&A.

Tebbutt said he was excited to “explore‚ learn‚ taste and understand such a totally diverse country such as South Africa is a really exciting prospect for me”.

“I want to meet the people behind the food‚ the learn about the history of the dishes and cook alongside them...”