"I always wanted to come save Africa," says Claudia Castellanos with a sardonic grin. Bored with her corporate job in Italy, the Colombian approached MBAs Without Borders, who place volunteers in advisory roles at socially-minded companies abroad. 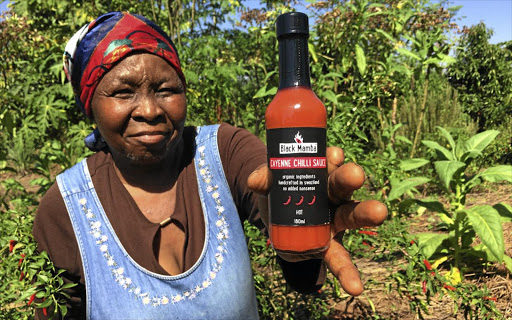 When offered a post in Swaziland, she quickly googled where Swaziland was, making sure it was in Africa. With that detail confirmed, she accepted.

"I was supposed to be here for four months and I've been here for eight years," she says.

While helping out with the marketing strategy for Gone Rural, a Swazi homeware brand which works with a network of women weavers, she fell in love with the tiny kingdom (and one of its citizens, Joe Roques, whom she married). When her volunteering gig came to an end, she joined TechnoServe, a business NGO.

Throughout this time she got to witness Swaziland's thriving fair trade network — a bunch of predominantly handcraft companies that produce high-quality, low-volume products, empowering thousands through decent wages, training and social and environmental commitments.

When Roque, a chilli-obsessed builder and graphic designer, told her how he had made a hot sauce under the name Black Mamba as a side project, Castellanos suggested they give it a go professionally. In 2010, they cooked up a trial batch at home and sold it at Bushfire; by the end of the three-day music festival there were no bottles left.

They've come a long way since — upscaling from their kitchen to a squash-court-sized factory in Matsapha where the sauces are cooked up, bottled and labelled by hand.

Their socially conscious principles have remained intact: all ingredients are locally sourced, and to help tackle the gender inequality that persists in Swaziland, they work with three groups of mostly women growers — many of them grandmothers who use the income they get from Black Mamba to support extended families.

The 60-odd growers have been trained by Guba, a food security and agriculture NGO, in permaculture principles to farm chillies and herbs without chemical fertilisers or pesticides.

Castellanos hopes this is a model that more of Swaziland's agriculture sector will embrace — moving away from cheap crops to focus on farming high-value crops organically. "The land here is so fertile; everything grows beautifully so why don't we take advantage of that instead of growing maize and sorghum?"

The land here is so fertile; everything grows beautifully so why don't we take advantage of that instead of growing maize and sorghum?

Although neither is a trained chef, Roques and Castellanos both love experimenting in the kitchen. From the fiery cayenne sauce and a milder jalapeno one they launched with, the Black Mamba range has steadily expanded. The super-hot habanero sauce is a nod to Castellanos's Latin American roots, as is the seductively smoky chipotle sauce.

When a distributor told Castellanos that pesto was all the rage in Cape Town, they developed cracker-friendly basil cayenne and coriander jalapeno pestos. The beetroot ginger and spicy mango chutneys offer amild alternative for those who aren't hard-core chilli aficionados.

Castellanos says the brand appeals to three distinct buyers — "the chilli-heads" (those who like it hot), "the ethical foodies" (people who support fair trade principles) and the "health ambassadors" (people who buy organic for its perceived health benefits).

She wants Black Mamba to be a "cult brand". "We don't sell chilli sauce, we sell Black Mamba. It's a concept, a lifestyle."

To get some chilli, visit blackmambachilli.com