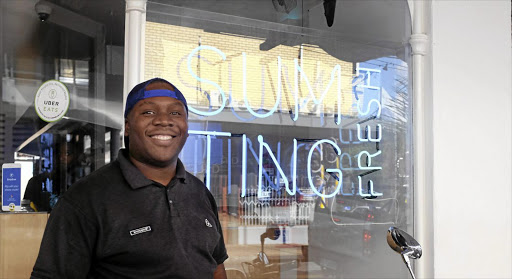 Chef Andrew Leeuw believes casual dining is the future of food. And he should know, as a fine-dining chef turned street-food fundi, his journey has been a long one filled with failed restaurant attempts, dramatic battles with executive chefs and a vegetable shop that sold CDs.

But nothing worked out until he and his friend (and now business partner) Hezron Louw went out for drinks one night and decided to quit their jobs and start Sumting Fresh.

They bought a trailer, pimped it out and tried their luck on the streets, eventually landing a spot on the side of a road in Midrand. There they spent two years perfecting their style and menu, which became a feast of stuffed burgers, half baby chickens and wings so good people would pre-order them on their way to work.

But it wasn't until they cracked the nod to attend the Fourways market that they became the market food staple that many know and love. One of their crowd-pleasers is Gujon chicken, mounds of chicken strips on a bed of fries and sweet chilli sauce, covered in a snowy blanket of Parmesan cheese, with a wedge of watermelon as a palette cleanser.

You'd be hard pressed not to smile when you eat their street food. Even the ordering of each delicious meal will have you grinning as your choice is yelled to the chefs with a sing-song "Bump up that cheese."

It's the same fun and fanfare that you'll now find in Norwood, at the tiny outlet squeezed in between Andiccio 24 and Simply Asia on Grant Avenue. The shop, which is "open but not yet launched", is white and raw with a row of antique bunkettes and one antique yellow table.

The counter, like the rest of the space, is a work in progress but the food, as always, is well considered and delicious. Almost everything is made by hand and in-house, from the 800kg of hand-cut chicken to the sweet chilli sauce that takes 18 hours to make. You can taste the difference. Even their fried offerings taste fresh.

Their famous Gujon chicken strips are joined on the menu by their equally well-loved "winging it" chicken wings. The two-hour brine soak and fast-fry makes the skin light and crispy but not at all greasy. The wings are perfectly paired with a chilli sauce.

The "Italian Stallion" and "What Came First" are two chicken-breast bun feasts. Both are served on a bagel roll in an ode to Leeuw's beloved bagel supplier who passed away a few years back. He refuses to serve his burgers on anything else.

The Gujon chicken is based on Leeuw's grandmother's recipe that he learnt from his mother, both of whom used to work in the restaurant business .

Now, to complete the family history, he co-owns a fried chicken joint.

And Leeuw insists he's not done yet. As soon as he gets his liquor licence there'll be a grand opening, new dishes, parties and a flowing bar, not to mention going back to his roots and braaiing some old favorites on the street outside his shop on a Sunday.

But until then, find them at the tiny white space on Grant Avenue, order from your favourite delivery app, or seek them out in their double-decker food bus, singing at a market near you.