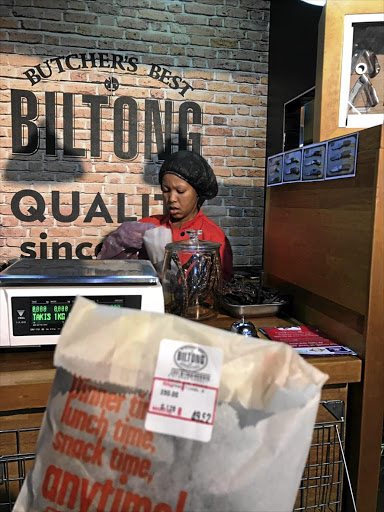 A customer pays a hefty R420 per kilo for their favourite snack without knowing the price. Most biltong outlets don't display the price per kilogram.
Image: JACKIE CLAUSEN

If you don't know how much a kilogram of your favourite Wet and Fatty, Traditional or BBQ will cost you, there's a reason for that — most biltong retailers don't display their prices because the prices will scare off customers.

According to the Consumer Protection Act, which came into effect six years ago, such an act is illegal as a "retailer must not display any goods for sale without displaying to the consumer a price in relation to those goods".

Ask the person working behind a counter displaying tubs of "Traditional", "Wet & Fatty" and "BBQ" why their per-kilogram biltong prices aren't displayed, and you're likely to get a blank stare, a shrug or "My boss says we mustn't".

A young woman working at a biltong outlet in an upmarket KwaZulu-Natal mall — where loose beef biltong sells for R350 per kilo — was more candid than most: "My boss says the price would repel customers because it's so high, they can buy it a lot cheaper at Pick n Pay."

When the Sunday Times asked an attendant at a biltong kiosk at the Engen One Stop in Cato Ridge for the (undisplayed) price of the biltong per kilo, she said: "About R250."

But the scale revealed the price of sliced beef biltong to be a hefty R390 per kilo.

"If you have to put the price up, then you get a lot of complaints and sales slow."

Scheun said he believed that if goods were on sale in a "display cabinet", prices did not have to be displayed.

In fact, the CPA states that a retailer may attach the price to the shelf or "display goods" housing the items on sale.

At the biltong kiosk in Pick n Pay's La Lucia branch, no per-kilo prices are displayed on the trays of loose beef biltong. When asked for the price, the attendant consulted a sticker on her side of the display before responding: "R249.99 a kilo."

A snap countrywide survey revealed that loose beef biltong is retailing at between R160 and R390 per kilogram — and the overwhelming majority of outlets don't display their prices.

So consumers who simply ask the person at the counter for "R50 Spicy" won't know that at R390 a kilogram, that's very pricey Spicy and they'd get a lot more biltong for their buck if they went to the butcher or kiosk down the road.

And price increases are very easy to implement if your customers aren't aware of the per-kilo price — they may not notice that their R30 or R50 has bought them fewer pieces of biltong.

"Issues of inadequate price display are not widespread," he said, suggesting that the biltong sellers' mass defiance has escaped the inspectors' attention.

Pick n Pay's KwaZulu-Natal general manager, Anil Gopichund, said he had found instances where "a shelf talker displayed the loose biltong price per kilogram, but there was no corresponding shelf-edge label. This has now been rectified and we're making sure all our stores in the region are fully compliant."

A few retailers have opted to buck the trend and display their per-kilo prices for loose biltong, including Food Lovers Market, several SuperSpars and Biltong@ZA branches in Gauteng.

Hattingh urged consumers to report retail outlets not displaying prices to the commission.