Kota masters: food from the hood gets upwardly mobile

Kota shops are not just places to eat, they are bastions of township pride. Is the kota’s upward mobility into the suburbs harming its cred? 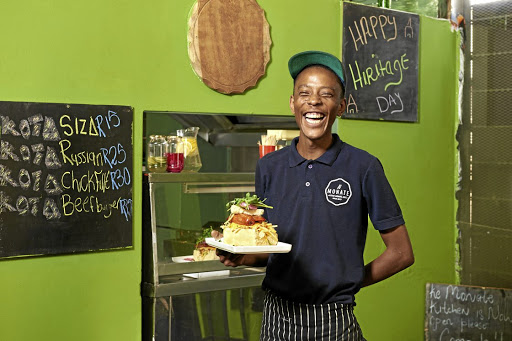 The kota, a fast food quintessential to Mzansi's townships, gets its name from its signature ingredient - a hollowed-out quarter loaf of bread. Typically, the cavern that remains is filled with atchar, chips and optional layers of sauce, processed meats, cheese or egg. It may also contain fish or stew, but there was some muttering about the experimental creations on offer at last week's Soweto Kota Festival - spicy chicken feet in one; scrambled egg, butternut and spinach (the "vegetarian breakfast kota") in another.

Some were full of praise, but not everyone welcomed these innovations. Purists on social media criticised the lavish new combinations, saying the fancy kotas "look like they went to a Model C school". What these critics fail to acknowledge is that many Model C matriculants had their school fees paid for by the proceeds of kota businesses in South Africa's robust informal economy.

There is much argument over which came first: the uninitiated sometimes confuse the kota with the bunny chow. The difference is one of size. An original bunny chow is made by hollowing out half a standard loaf of bread. A kota is, obviously, a quarter loaf.

Just as the kota can have many fillings, it also has multiple names. In Mamelodi or Atteridgeville you buy sphatlo, and in the Vaal Triangle it is iskhambane.

Apartheid legislation inadvertently made townships the sites of linguistic and cultural amalgamation. Out of these fusions, new identities and cultures were formed.

As Sasko Soweto Kota Festival organiser Sidwell Tshingilane says: "Everyone can relate to kota, especially if you are from a township. Everyone knows kota, everyone grew up eating kota."

In gathering as many kota vendors from as many Gauteng townships as his festival venue could accommodate, Tshingilane was moved by the overriding entrepreneurial spirit he encountered, regardless of whether kota vendors sold their wares from backyards with hand-painted menus or at franchised restaurants.

"Kota is supporting families," says Tshingilane. But in the free market not all kotas are equal. The most desirable kota survives at the expense of lesser kotas, and what is in that U-shaped cavern of bread crust can mean the difference between success and failure.

George Mnguni (aka Okay Wasabi) and Daluthando Monageng (aka Daliii Danger) believe that the best kotas are those that stay true to their cultural roots. The two millennials run Kota Past 9, a web series that reviews kotas from around Gauteng. They find kota takeaways by word of mouth and through social media.

Wasabi believes that kota vendors outside of the township are "trying to bring the hood to the city, which I don't think people will relate to".

Kota Past 9 has provided many opportunities for Wasabi and Danger to big-up Vosloorus, where they were raised and still live.

From Beef Wellington to scotch eggs, The Crazy Horse has brought the best of Britain's classic pub grub to Cape Town
Lifestyle
3 years ago

But Wasabi and Danger set their personal opinions on kota appropriation aside when they gave a positive review to Ke Monate restaurant, on the outskirts of the gentrified Maboneng Precinct in Johannesburg.

Ke Monate is the brainchild of young chef Phahla Thobejane, for whom the kota is not a cultural icon but a culinary opportunity.

"Kotas are the easiest thing for me to make because I'm alone in the kitchen," says Thobejane. "I could sell pap and rice and stews, but I don't have enough hands."

Apart from the kota's practical advantages, Thobejane enjoys his role as a contributor to - some might say disrupter of - kota culture.

"You need to have an impact," he says. "I couldn't come in with a regular kota. I feel like my skill has taken it to the next level, working with more flavours."

You need to have an impact. I couldn't come in with a regular kota. I feel like my skill has taken it to the next level, working with more flavours.

Thobejane's menu reflects a considered reimagining of the kota. He has introduced new ingredients like red onion, fresh chilli and home-made pickled cucumber, but these are combined with traditional items, such as russian sausages, that have made the kota famous.

In some ways, Ke Monate has many ties to township culture.

Thobejane and a group of friends formed a stokvel to fund the business, which opened in February. The grandmother of one partner owns the building and they rent the space from her.

In other ways, the business is upscale in its location, decor and tagline - "Food, Drinks, Art" - all of which resonate with the crowd at nearby Umuzi, a multimedia training academy.

In a bid to reduce the calorific content of kotas, some vendors, such as Carol Dooms of Westbury, use rye bread, fewer processed meats and more fresh vegetables, but the Healthy Kota Campaign, launched in 2015 by Mpho Phalatse, Joburg's member of the mayoral committee for health, has not been an unqualified success.

A recent slew of social media posts by the City of Johannesburg have raised the ire of even the most liberal kota connoisseurs.

The images showed kotas made with brown bread and filled with a variety of healthy alternatives, from boiled eggs and raw vegetables to sautéed lean cuts of meat.

Possibly the easiest Italian tart you'll ever make, this one ditches the fiddly pastry in favour of a tasty mealie meal crust
Lifestyle
3 years ago

Phalatse is not the only evangelist advocating that South Africans lead healthier lives.

At a national level, Health Minister Aaron Motsoaledi has waged war on the common culprits behind noncommunicable diseases that are crippling people, families and the national health system - diabetes, cardiovascular diseases and high blood pressure.

But the elusive enemy in Motsoaledi's war remains unlabelled, unregulated food produced in the informal economy and not subject to the rules of the formal one.

Both Motsoaledi and Phalatse would do well to recognise that culture is not easily debunked - especially when it drips with flavoursome, deep-fried ingredients, carried in soft white bread and so popular that it has become a beacon of cultural identity.

Roving through Joburg with the freedom peddler

Give it back: Africa’s treasures need to come home