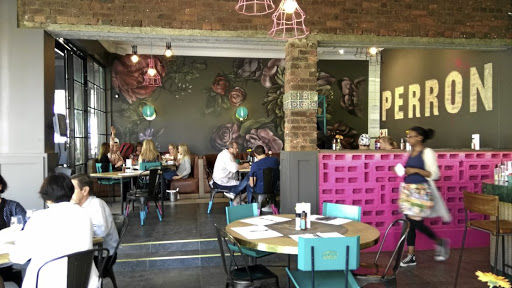 The décor at Perron in Melville is bold and gorgeous.
Image: Supplied

Even for a suburb that styles itself as Joburg's restaurant central, Melville has been crying out for the next yummy thing.

And that thing has arrived in the form of Perron, which opened on 4th Avenue last month. Its modern Mexican menu is making diners shout si, por favor.

The décor is bold and gorgeous, from the sunburst mirrors to archways of Talevera-style tiles and the façade mural of blooming pink roses on a moody, dark-as-night background. The vibe is laid-back and makes ordering another round seem like a damn fine idea. 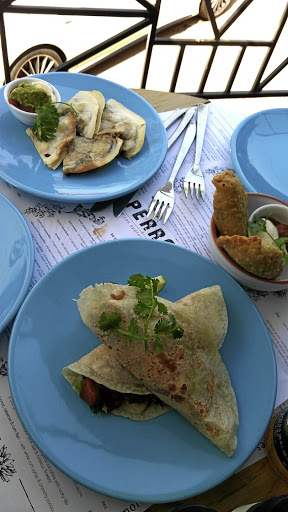 This is the third restaurant in the Perron family to open in Joburg. The other two are in Bryanston and Illovo. The owners tell how living abroad and eating Mexican in London (strange, but true) made them firm fans of Mexican nosh.

Longing for it back home in Joburg they created Perron as their personal "Mexican Appreciation Society".

They started out in 2014 in Illovo and say the new Melville restaurant is about reaching another part of the city rather than designs to become a franchise - thank goodness.

They insist each restaurant has its own personality even though the menus and turquoise and pink colour palette are shared by the three restaurants.

At the heart of the menu is los mas pequenos "the little ones". The small portions of Mexican staples like tamales, quesadillas and tacos allow diners to order several plates to share; prices range from R51 to R84.

Also yum is the levanta muertos - it's a Bloody Mary prawn cocktail with red onions, tomato, avo and a handful of corn crisps, perfectly spicy and tangy.

One diner declared his "slammin' salmon" (R155) of corn tostados with blackened salmon fillet the best ever that's passed his lips.

What to drink:  The gingerbread mule cocktail or tequila, of course.

Who you'll see: Melville regulars desperate for a change of scenery.

Could be better: Fresher tuna sashimi.

Check out: The décor is super Instagrammable. Also, you've got to love that the bill comes tucked into a novel of your waitress's choosing.

Who doesn’t love a decadent pastry? Here's where to head to enjoy some of the best baked goods in town
Lifestyle
4 years ago

Could this be Joburg's answer to Whole Foods?