Bar literally boots people out for saying the word 'literally'

From Cape Town to New York, there's a host of bars around the world that take drinking games to a whole new level 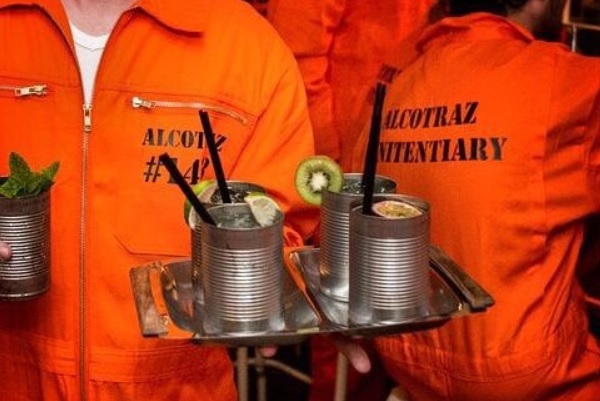 Patrons at London's Alcotraz have to don prison uniforms and smuggle in their own booze.
Image: Alcotraz/Facebook

The Continental in New York is a fading dive bar with a seedy-looking façade and a new prohibition on bad grammar. The famous East Village venue, which once played host to Iggy Pop and The Ramones, is slated to close its doors permanently at the end of June; but it seems the staff is intent on calling the shots before its dissolution, and a sign in the window now elucidates the bar’s ban on the incorrect usage of the word “literally.”

According to this brazen memorandum, any patron caught using ‘literally’ for emphasis will be granted a grace period of five minutes to finish their drink before having to vacate the premises. Literally.

The Continental does not have a monopoly on strange etiquette, though; a host of bars around the world enforce strange statutes, either to differentiate themselves from their more blandly accommodating competitors, or because the proprietors are genuinely a bit peculiar.

A somewhat problematic bar in London – ‘Alcotraz’ – refuses to distribute alcohol, and insists instead on its patrons dressing up like overall-clad convicts and smuggling in their own contraband, which the complicit barkeeps then process into cocktails.

The Patterson House in Nashville has an embargo on cellphones, name-dropping, play-fighting and talking about play-fighting. And The Maple Bar in Canberra has a policy that prohibits men from initiating flirtations with women, in a bid to safeguard the comfort of this (routinely harassed) demographic.

Then there are bars with fairly routine ordinances, but with settings that defy the standards of normalcy.

For the discerning melancholic with a desire to laugh – or imbibe – in the face of mortality, a 66-foot long, 20-foot high coffin in Ukraine houses Eternity, a mourning-themed bar with a moribund menu.

South Africa isn’t bereft of weird bars, either. The Big Baobab on Sunland Farm, Limpopo, houses a bar in the hollow of its 6,000-year-old trunk; and the HQ Exchange event in Cape Town converts the bar of this local favourite into a bibulous stock-market: the price of drinks fluctuates relative to the profligacy of people’s spending.

Still, as far as petty proscriptions go, the ban on ‘literally’ goes unrivaled – and The Continental must have alienated many a Millennial on these grounds.

Why would you roll with a dull daiquiri when you can sip one of the many mind-blowing boozy concoctions on offer at Outrage of Modesty? asks Allison ...
Lifestyle
3 years ago

Breeze into Saigon Suzy for Southeast Asian street food, cocktails and a spot of karaoke
Lifestyle
3 years ago
Next Article