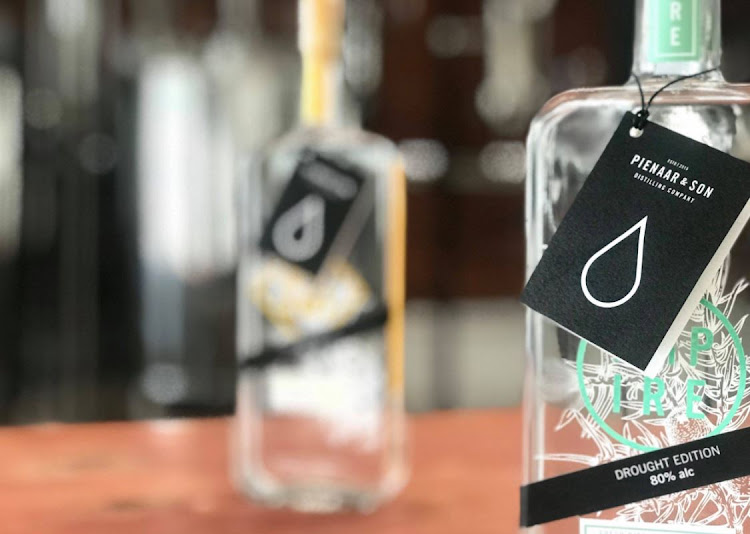 You might want a mixer with this gin - it is 80% alcohol.
Image: Pienaar & Son Distilling Co. via Facebook

Tipplers in the drought-stricken city of Cape Town will now have an opportunity to play a role in helping to conserve water with the introduction of what is being hailed as the world’s strongest gin.

Pienaar & Son Distilling Company is launching a Drought Edition of their gin which contains 80% alcohol - and saves about 500ml of water per bottle.

Next Monday (26th Feb) we get to launch something we have been thinking about and working on for quite some time. - Gin...

André Pienaar is adding 200 litres of water to a new batch of gin to dilute it down to 43% alcohol. He says it is common practice to dilute gin with water to bring the alcohol level down.

“Everyone has their different things‚ but generally speaking it comes out of the still definitely well above 70% [alcohol]. Then you basically just chuck in a whole lot of water to get it down to 43%‚” Pienaar said.

“If you don’t dilute it with water‚ then single shots have got double the strength and double the flavour. If you’re drinking it as a gin and tonic‚ then a single [of the Drought Edition] has the same effect as a double [of most gins].”

Pienaar said the taste is the same as any other gin.

“If you put the two of them (Drought Edition and diluted gin) as a blind test in front of a world expert‚ I am sure they might be able to tell the difference here or there‚ but it should taste to most people basically identical.”

According to the regulations of the Liquor Products Act 60 of 1989‚ there is no limit on how much alcohol gin may have. It only says gin must have at least 43% alcohol.

The Drought Edition will be launched on Monday online at Pienaar & Son’s online shop (http://pienaarandson.co.za/shop.php) and some liquor stores. A bottle will cost you R599 and is available in Eastern spices and fresh citrus or fresh citrus and cucumber.

Jeremy Crowder commented on the announcement on Facebook: “Now we can pour our gin in half the time.”

David Cope remarked on Instagram: “Also‚ can still have a double of Drought Gin if you’ve had a rough day.”

Next Monday (26th Feb) we get to launch something we have been thinking about and working on for quite some time. - Gin comes off the still at 80% alc. Usually diluting this gin to 43% require about 200L of water per batch. We decided to skip this step. It saves water and gets us all thinking about water and how to save more of it in our every day lives. - Pienaar & Son Drought Gin will be bottled at 80% alc. - PLEASE DRINK RESPONSIBLY

The R6-billion allocated by Finance Minister Malusi Gigaba for drought relief and infrastructure is a drop in the ocean‚ Western Cape Premier Helen ...
Politics
4 years ago