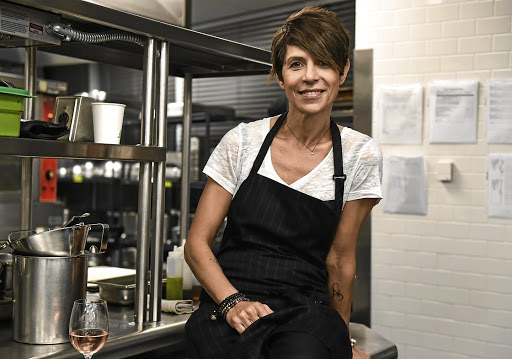 Atelier Crenn’s chef and owner Dominique Crenn, was the recipient of the patronising “best female chef of the year”, 2016.
Image: Gallo/Getty Images

The influencial list of World's 50 Best Restaurants was announced this week. It was, as usual, dominated by multicourse tasting menus, huge price tags, European destinations, and men.

Yes, one of the most newsworthy things about this year's list is not the name of the chef who has risen to the top like a perfect soufflé - Massimo Bottura - but who was left out. Women. Almost entirely. Only five of the chefs at the 50 top restaurants are women.

Atelier Crenn's chef and owner Dominique Crenn was the recipient of the patronising Best Female Chef of the Year title in 2016. This is odd, because her restaurant wasn't ranked in 2016. In 2017 she debuted on the long list at number 83, and this year dropped off the list entirely.

This week Crenn shunned the event at which the list was announced. Instead, the two-Michelin-star chef attended a charity event to raise money for women's health.

The day before the awards she gave an interview to the Washington Post calling the Female Chef Award "stupid" and accusing the World's 50 Best fraternity of treating women "as if we are a sport".

So we can assume that, according to the awards, the best female chef on Earth is still not as good as the 50th-best male chef

The criteria for this offensive award seem nonsensical. Of the eight women who have been awarded it since 2011, none have had their restaurants featured on the list of the top 50. So we can assume that, according to the awards, the best female chef on Earth is still not as good as the 50th-best male chef.

That's not to say that there are not restaurants on the list in which women hold key positions. The number of female chefs (or co-chefs) on the list increased from last year's three to five in 2018: Central by Pia León and Virgilio Martínez; Arzak by Elena and Juan Mari Arzak; Hisa Franko by Ana Ros; Cosme by Daniela Soto-Innes and Enrique Olvera; and Nahm by Pim Techamuanvivit.

It's pretty outrageous that the chefs on the "women only" list haven't been honoured in the world rankings. Why are we singling out women for praise based on gender alone?

Mark Durden-Smith, one of the presenters at the awards, said: "It's all about girl power tonight."

My response is the following: firstly, female chefs are not "girls", and, secondly, it can hardly be considered a female forward event when only two of the restaurants on the list, Nahm and Hisa Franko, are run without male co-chefs.

The World’s 50 Best Restaurants list is one of the most influential and prestigious culinary rankings around. So when the Academy behind these ...
Lifestyle
3 years ago

As a female chef I ask myself, why are women simultaneously praised for their capacity to do great work while at the same time systematically excluded from the top honours on the serious list?

This award entrenches gender bias while at the same time reiterating its attempt to move beyond it.

Clare Smyth, the 2018 recipient of the world's best female chef award, said: "For the last 10 years of my career I've been asked what it's like to be a female chef, to which I always reply, 'I'm not sure what you mean, I've never been a male chef'."

Guess what? Her restaurant Core did not make this year's World's Best Restaurants list.

Katia Scherf is an inspiration to young female chefs everywhere

At just 23, smak deli founder Katia Scherf is already one of the brightest stars on the Cape Town culinary scene, writes Jessica Brodie
Lifestyle
3 years ago

It's official: the world's Best Female Chef is South African