Not only did discovering how to cook with fire help the human race evolve, but it also gave Mzansi a national cooking method that's capable of uniting the country 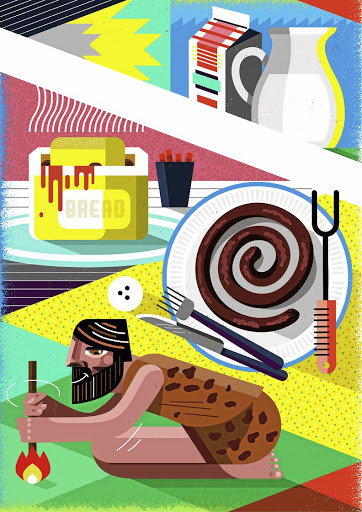 Learning how to control fire in order to cook food allowed the humans to access maximum nutrients from ingredients, aiding our evolution.
Image: Resoborg

Somewhere in Gauteng lie the bones of the bright spark who first took a burning log back to her cave, kept it alight and used it to make lunch. The rest is history.

No matter what the French say, South Africans invented cooking. Palaeontologists have shown that nearly 2-million years ago, pre-human hominids living in Gauteng's Cradle of Humankind were the first beings ever, anywhere on Earth, to catch and control fire. And to start cooking up a storm.

CK Brain and A Sillen's 1988 article in Nature, Evidence from Swartkrans cave for the earliest use of fire, states that finds included "hundreds of burnt antelope bones that had been heated to a range of temperatures consistent with that occurring in campfires".

Before we get too smug, let's take a moment to recognise that the Gauteng branch of the Homo erectus family were not necessarily more intelligent than other proto-people but rather that the landscape's multiple lightning strikes combined with quartz-rich Highveld soil made it very vulnerable to veld fires. So, Gauteng's hominids had more than their fair share of opportunities to hone their skills with the fabulousness that is fire.

And we can be so glad they did. Harvard anthropologist Richard Wrangham's 2009 book Catching Fire - How Cooking Made Us Human argues that the dietary change from raw to cooked food allowed significant anatomical alterations to evolve. Consumption of uncooked ingredients is not just grindingly tough on dental enamel, it also inhibits intellectual growth.

It is postulated that with fire comes cooking and with cooking comes the ability to access maximum nutrients from ingredients, which in turn allows for the evolution of the larger, more energy-expensive brains of our own Homo sapiens species. Our species literally exists because those who came before us learnt how to control fire enough to cook on it.

Is it any wonder that modern South Africans are so deeply wedded to cooking on fire? The land on which we live almost literally glows with the embers that ignited the evolution of our species.

The Khoisan and slaves are the people South Africans need to thank for our national love of braai meat‚ biltong‚ droëwors and bredies.
Lifestyle
4 years ago

It's not just Gauteng; close your eyes and picture a South African Sunday. Now take a sniff of that vision - whether your mind's eye calls up Soweto or Sandton, Manenberg or Mount Edgecombe, I bet it's the fire, fat and coriander-seed-scented boerewors braai smoke that blows into your brain. While other countries have a national dish, South Africa has a national cooking method.

Flamed food is equally popular in the commercial cooking arena. From the braai grids, plastic tables in the street and doef-doef sound system of Endaweni Shisa Nyama, Vosloorus, to the multimillion-rand, custom-made, wood-fired grill at celebrity chef David Higgs's Marble restaurant in Rosebank, Johannesburg, we are pyromaniac people.

While other countries have a national dish, South Africa has a national cooking method

Maybe fire's ancient origins explain the quasi-magical powers attributed to it by the folks at National Braai Day (NBD). NBD mutated out of the Heritage Day public holiday and seems to ascribe totemic primal purifying properties to this cooking method. NBD patron/yoda-in chief Archbishop Emeritus Desmond Tutu says that braais "unite us all in a common purpose and transcends racial, social, cultural and language barriers."

Ja well, no fine. How do we explain the recent alleged violence and racial slurs thrown at black South Africans attempting to share space with their white neighbours at the Oewer Club Resort, Hartbeespoort Dam? Mutual fire fetish is not enough.

But before we totally give up on kumbaya cuisine, let's remember that once, long ago, there was a South African innovator who made the world better for everyone when she started cooking on fire. Perhaps we can do it again.

8 sensational side dishes to serve at your next braai

Bored with the same old coleslaw and potato salad? Try these recipes for deliciously different braai sides
Lifestyle
3 years ago

Melissa de Billot, co-ordinator of Slow Food Ark of Taste SA, tells us more about how this organisation is helping to safe-guard our culinary hertiage
Lifestyle
3 years ago