The past few years have brought significant changes to the City of Gold’s coffee scene helping Joburgers to expand our horizons beyond the average sweet, milky cappuccino 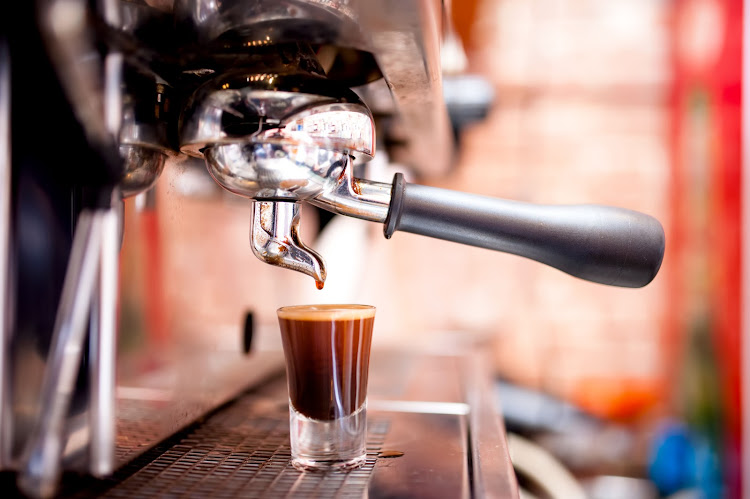 In a warehouse in Braamfontein, Joburg, Brilliant Ndlovu dips a large metal scoop into a plastic bag filled with greenish-white beans from Ethiopia. He shovels the beans into a bucket on a scale, then, bucket in hand, climbs a stepladder beside a roasting machine and dumps the beans into a big funnel at the top.

Back on the floor Ndlovu fiddles with a laptop beside the machine, studying the colourful graphs on the screen. He reaches for a switch, flips it, and the roaster roars to life.

Visible through a tiny glass portal in the front of the machine the beans tumble and spin. Over the next 12 minutes the beans change from greenish-white, to beige, to brown.

A load of already roasted beans spins around the drum at the base of the machine. Metal arms move the beans like ripples in a lake. Those beans are cooling, almost ready to be emptied out of the drum and packaged at the back of the warehouse.

When they are done and the drum has been emptied, and when Ndlovu is certain the roasting beans’ colour and temperature are perfect, he throws a lever.

The machine’s mouth opens, spitting hot beans into the drum. A cloud of steam rises, and a smattering of pops is heard. This is what Ndlovu calls "the first crack", when moisture builds up inside the bean and bursts forth, cracking the outer shell.

The beans have just become coffee.

Yield has perfected the art of the takeaway coffee

If you're looking for a spot to get your early morning caffeine fix in Linden, Joburg, this is it, writes Catherine Black
Lifestyle
3 years ago

Ndlovu has been roasting for Bean There Coffee Company since 2011; the firm has been around since 2005. It has three roasteries, two in Joburg and one in Cape Town, and supplies single-origin fair-trade beans to grocery stores and coffee shops across SA. The beans are bagged and labelled by country — Kenya, Ethiopia, Rwanda and Burundi.

When Ndlovu is asked which bean he likes best, he chuckles and shakes his head. "It’s like having seven children and [being asked] to choose which is your favourite," he says.

A SURGE OF INTEREST

The speciality coffee craze arrived late in SA. "Coffee in general is still horribly underpriced in the country, thanks to a legacy of cheap, commodity-grade coffee setting a very low bar," says Chad Goddard, co-owner of Father Coffee, which opened in Braamfontein in 2013. "But things are definitely changing. There’s a noticeable surge of interest in speciality coffee and an appreciation for better coffee among SA consumers."

Father Coffee was one of the first speciality coffee roasters to enter the Joburg CBD. It began in a tiny, wood-panelled space below the trendy Neighbourgoods Market. In 2016 it opened a second shop in Rosebank, which is now packed with business travellers and backpackers fresh off the Gautrain from OR Tambo International Airport.

Goddard says Joburg’s coffee scene has been even slower to develop than those of other SA cities. "Joburg is like London was 10 years ago," he says. "You could get coffee everywhere, but you couldn’t get good coffee anywhere."

Joburgers are focused on saving money and time. This no-nonsense business mentality has made it hard for speciality coffee to take root

Compared with Cape Town or even Durban — more slow-paced cities, where coffee lovers are inclined to relax for hours by the sea, sipping espresso — Joburgers are focused on saving money and time. This no-nonsense business mentality has made it hard for speciality coffee to take root.

"People are coming to Joburg for business," says Lovejoy Chirambasukwa, who works for Craft Coffee in Newtown. "Two years ago, it was all about price."

But the past few years have brought signs of change to the City of Gold’s coffee scene. Several small, sophisticated roasteries have opened in the Joburg CBD and across the suburbs. And as the born-free generation comes of age, passion for speciality coffee is spreading well beyond the white hipster set.

Chirambasukwa is originally from Zimbabwe. He fled across the border in 2009 and ended up in Cape Town, where he worked a series of odd jobs before becoming a cleaner at Origin, one of Cape Town’s best-known speciality roasters. Within a few months Chirambasukwa was Origin’s head barista.

He won the SA barista championship in 2013.

This coffee-centric spot is the Joburg cool crowd's latest addiction

In 2015 this java aficionado moved to Joburg to join Craft, where he manages the roastery on Gwigwi Mrwebi Street in Newtown. Craft supplies big corporates through its parent company, the Daily Buzz, while also serving flat whites and cortados to artists, students, and workers from Newtown’s graffiti-clad warehouses.

When asked about the slow rise of speciality coffee in Joburg, and SA generally, Chirambasukwa points out that a historic focus on cost over quality isn’t surprising. "Inequality plays a big part," he says. "Not many people can afford to pay more than R20 for a cup of coffee."

But this reality is changing, as more South Africans pursue higher education and international travel. Chirambasukwa gestures around him in the Craft store — two young black women sit at a table near the stairs, studying an open MacBook. A woman wearing a hijab sits by the window. Japhet and Neo, two of Craft’s other staff members, roast Ugandan beans on a state- of-the-art machine at the back of the cavernous room. There’s not a white kid in sight.

Thirdspace, a speciality coffee roastery and co-working space in the far-northern Jozi suburb of Craigavon, adjacent to Fourways, is a long way from the grittiness of Newtown and Braamfontein. The large, open-plan space has exposed-brick walls and slick Italian chairs designed for long periods of sitting. Wi-Fi is fast and free.

David Walstra sold his security company before opening Thirdspace in 2017. "I wanted to provide what I felt was lacking," he says. "Fourways has never had good coffee."

His gamble seems to be paying off. The shop’s ground level is full, and customers are going upstairs to sit at a big table next to the coffee roaster.

Walstra has recently hired Ben Jenkin to manage his roasting operations, with the goal of moving the business from "micro-roasting" to a larger operation serving small customers and corporates alike.

Jenkin, a lifelong coffee enthusiast from the UK with degrees in environmental management and sustainable development, has travelled throughout Africa and is committed to working ethically with coffee farmers. Though African coffees are the Brit’s passion, he also roasts beans from other parts of the world. Coffee profiles must be carefully balanced between sweetness, acidity and bitterness, Jenkin observes, and careful blending is a good way to create that balance.

"Where you are in the world affects what the ratio should look like," says Jenkin. "For the SA palate you need very high sweetness, very low bitterness, and very low acidity."

The Thirdspace duo is working to give local coffee drinkers what they want while also expanding their horizons beyond the average sweet, milky cappuccino.

Cape Town's coffee renaissance continues with the advent of Pauline's in Sea Point, brought to you by Jon-Paul Bolus of Loading Bay fame
Lifestyle
3 years ago

Bean There takes a different approach, selling only African coffees and letting each bean varietal stand on its own.

"We believe you should be able to taste the origin of the coffee," says Cuth Bland, who works for Bean There and is one of only four certified Q graders in SA. To become a Q grader, Bland underwent rigorous testing of her ability to taste and grade coffees and differentiate between them.

"As soon as you blend, you’re putting two different origins together, so even though that may balance out a particular taste you lose a little bit of that ‘I’m drinking Kenyan coffee’ sense," Bland says.

"You lose a bit of the story."

While Bland concedes the majority of South Africans "are just looking for something milky, nothing that tastes too horrible", she has also noticed an evolution in her customers’ palates in recent years.

"People are starting to discern the differences in quality," she says. "As our skill in roasting has increased and our quality of green coffee has improved, people have come along with us. Which is amazing — I really didn’t expect that.

• This article was originally published in the Financial Mail.