Selling for up to R21,000/kg, truffles could be black gold for patient SA farmers 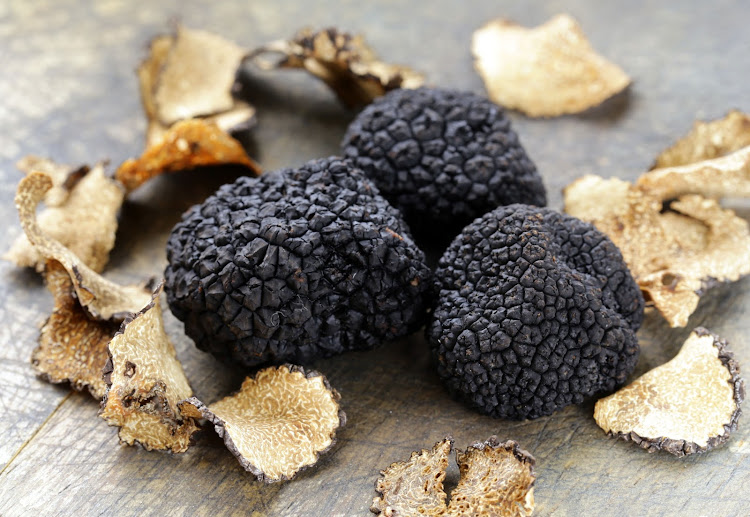 Money, so they say, doesn’t grow on trees. But it might just grow on their roots, if a new breed of optimistic truffle farmer is right.

Traditionally foraged from the forests of France and Italy by well-trained dogs and pigs, these pungent delicacies are highly prized by gourmands.

SA entrepreneurs, landowners and farmers are fast waking up to the profit potential of the Périgord, the truffle most widely cultivated worldwide. 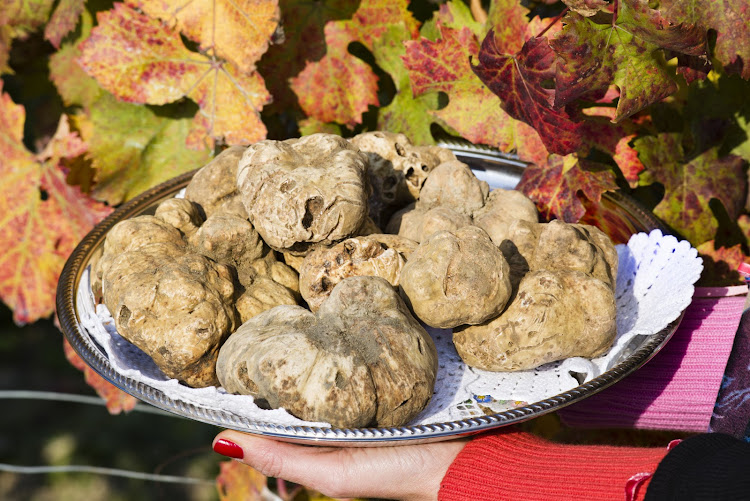 To get started in the truffle business you’ll need deep pockets. Presuming you already have a few hectares lying fallow on a farm, truffle orchards cost between R250,000 and R350,000 a hectare, with up to R20,000 per year in maintenance costs. Next you’ll need the patience to watch your trees grow for up to a decade before seeing a cent in return. This is no business for a quick buck.

"From germination to first truffle could be anywhere from five to seven years, but we’ve had them as early as three years in the orchard," says Neil van Rij, plant pathologist and mycologist at KwaZulu-Natal’s Mushrush, which sells truffle-bearing oak trees and offers consulting services to farmers.

Unlike mushrooms, truffles are hypogeous fungi, meaning they grow entirely underground, in a symbiotic relationship with a variety of tree species. Yet while the relationship is a simple one, cultivating them is far from it.

Commercial truffle orchards begin in hi-tech nurseries, where DNA-certified black truffle material, typically imported from Italy, is used to inoculate the roots of oak trees with truffle spores. English oak, cork oak and pin oak have been used locally, but the holm oak — Quercus ilex — from the Mediterranean is preferred for its disease resistance.

The trees, thousands at a time, are then tended in nurseries for 12 to 18 months, often inoculated further to ensure a high rate of mycorrhizal colonisation. That is, lots and lots of tiny spores that will grow into big, fat, expensive truffles. Once colonisation is established the oaks are planted in orchards. Once the inoculated tree has been planted, it’s typically four or five years before the first tiny truffles are harvested, and a decade before the tree reaches full production.

But if you can sit on your hands, and your investment, that long, the rewards are tempting.

"A 10-year-old orchard should produce around 50kg of truffles per hectare in a season. In Australia some orchards are producing up to 200kg per hectare," says Leon Potgieter, technical director of Truffle Growers SA.

Tuber melanosporum can be a finicky fungus, though, and to flourish it demands specific climatic and soil conditions. Using sophisticated geographical information systems, local companies have identified suitable landscapes across SA, from the Cederberg to the Garden Route and from Dullstroom to the Drakensberg.

In crunching the numbers, truffle farmers start by looking for one simple factor: cold.

"In order to fruit, Périgord truffles need a certain number of cold ‘units’, and without that cold on the site that has been planted you won’t get truffles," says Paul Miros, marketing director of Cape-based Woodford Truffles.

Woodford Truffles has been in business since 2007, and was one of the early pioneers of the local industry. It started out importing truffles from Europe, but soon expanded to truffle orchards, forming joint ventures with landowners "to spread the risk, learn about the industry, and put the truffles into different weather conditions across SA to improve truffle technology", explains Miros. "The grower does the farming, and we do the truffle technology, marketing and distribution of the produce."

Income is split 30/70 in favour of the farmer, and today Woodford Truffles is the largest player in the local industry, with more than 100ha under orchard. 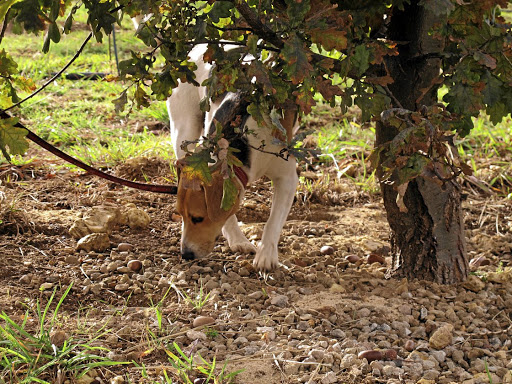 Well-trained dogs and pigs are used to sniff out truffles.
Image: Supplied/Financial Mail

While truffles will thrive in a variety of soils, the pH —the scale of acidity —needs to be alkaline. Between 7.9 and 8.2, if you know your chemistry.

To create those conditions most farmers apply large quantities of lime to the soil — up to 1t per hectare —adjusting the soil’s chemical composition and retarding the growth of competing fungi.

The availability of water is just as important as cold units and alkalinity, says Potgieter. "With the recent drought in the Western Cape, water has become such an issue that you don’t even look at soils until you know you can get water to the site."

Potgieter and Paul Thomas, a UK-based truffle grower and scientist, launched Truffle Growers SA in 2010. At their nurseries in the southern Cape they produce 18,000 truffle saplings annually, selling trees and entering partnership agreements with farmers across SA. They have 80ha of orchard planted out.

"We’ve had some great success with Tuber borchii," says Potgieter. "It is a cheaper variety, but it fruits in warmer climatic regions and can fruit all the way through from spring to summer, which makes it easier for people to farm."

After the millions invested and the years of waiting, SA’s truffle farmers may soon find one last hurdle in the way of unearthing long-awaited profits: thieves.

Scuffles over wild truffles have long simmered in the French countryside, with truffle dogs poisoned and the best spots jealously guarded. In 2015 a French farmer shot and killed a local man suspected of stealing truffles from his orchards, and was sentenced to eight years in prison. What will happen here once word of the valuable "black gold" gets out?

"It is a danger, and it’s going to get worse as people get to hear about the truffle orchards," says Potgieter.

That’s tomorrow’s problem, though, and for now local farmers are focused on the potential profits ready to be unearthed. 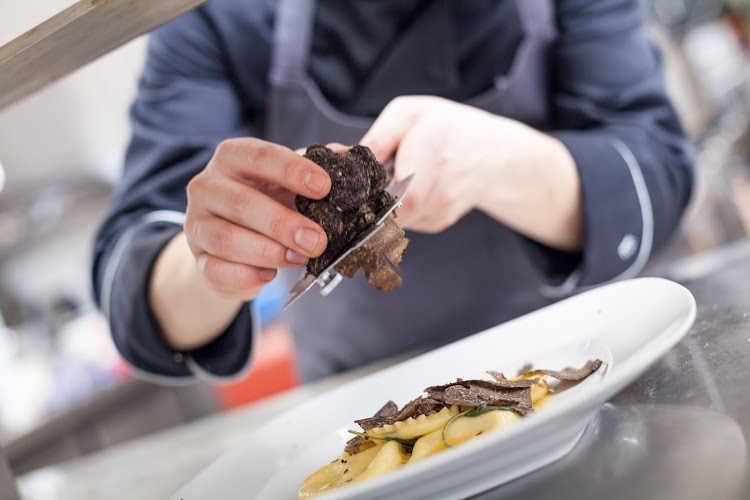 Even a few delicate shavings of truffle can add a powerful punch of flavour to a dish.
Image: 123RF/Nils Weymann

In the southern hemisphere truffles begin growing in November, and "in the colder, wetter months of May and June they will expand quickly and grow in size very fast", says Volker Miros, MD of Woodford Truffles.

One farmer partnering him is Dawie Burger of Driehoek farm in the Cederberg, north of Cape Town, where a 5.5ha orchard has recently been established.

Family-owned for generations, the farm was once heavily reliant on sheep and fruit, but "Driehoek is very cold, and by the time the fruit is ripe the markets are already full", explains Burger. "The roads are also bad, so getting fruit to market isn’t easy."

Truffles will hopefully prove a useful addition to Driehoek’s farming mix: easy to transport, high in value, and an additional drawcard for the ecotourists who increasingly support the local economy.

With orchards increasing exponentially, and established plantations maturing, Volker is hoping to harvest 100kg of truffles this season, all of it to be sold to the local market.

His son, Paul, says: "We’re selling directly to anyone who wants to buy truffles, but there will come a time when the local market won’t be able to absorb the production and we will push into the international market."

SA is already late to the truffle game. In the southern hemisphere Australia is the largest producer, with about 15t of black truffles produced each year.

Mosbec launched in 2014 with the purchase of a farm in the Langeberg outside Montagu, using truffle technology from Spanish company Micologia Forestal & Aplicada. While Mosbec has 17ha under orchard, it also has 10,000 inoculated trees in its nursery, waiting for farmers to plant out.

"The industry needs volume," says Mostert. "If we want to grow an export market in the US and Europe we need volume to guarantee truffles to clients in their off-season. My intention is to get as many people as possible to start planting orchards and producing truffles. If we can do that, the potential market is as wide as anything."

• This article was originally published on the Financial Mail website.

Mokgadi Mabela is the queen bee of organic honey in SA

One of the world's 16 best cheeses hails from Bapsfontein

Belnori Boutique Cheesery has put Bapsfontein, Ekurhuleni, on the culinary map after cleaning up at the 2018 annual World Cheese Awards in Bergen, ...
Lifestyle
2 years ago

Insects are a vitamin- and protein-rich super food with a nutritional value comparable to that of fish, says Paul Vantomme, co-ordinator of the ...
Lifestyle
1 year ago
Next Article