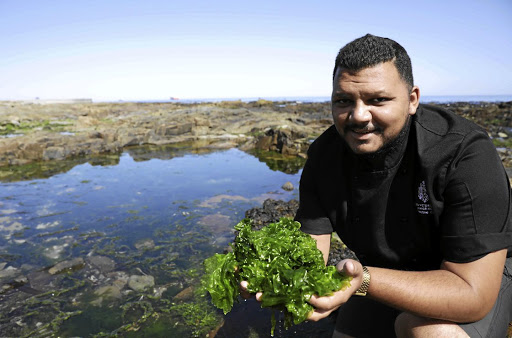 But executive chefs Ashraf Arendse from Dash restaurant at the Queen Victoria Hotel and Chris Erasmus, who founded the award-winning Foliage in Franschhoek, showed me that nutritious and sustainable food grows everywhere.

Scouring scraggly vegetation in the sand, far above the high tide mark, they pulled out sea lettuce. Shaped a bit like a bonsai aloe, the green-grey leaves were crunchy with a salty tang. Sea lettuce pairs perfectly with seared tuna and a Tom Yum sauce.

Staples from the dappled tidal pools include seaweed and sea urchins. "They are the fois gras of the ocean," says Arendse. "When I need to get out of the kitchen, I go foraging. Every day or second day I go to the beach."

When I need to get out of the kitchen, I go foraging. Every day or second day I go to the beach

Arendse, who studied at Cape Town International Hotel School, experiments with local cuisines including traditional Malay, African and Jewish influences. He designs seven-course tasting menus for Dash with seasonal ingredients, including those foraged from the seashore.

He pairs these with old favourites and the combinations are irresistible. When I ate at Dash, I barely had space to sample the penultimate venison course on the taster menu.

Arendse and Erasmus explore the nutritious and creative potential of all plants, even unpopular ones like stinging nettles, good in soup.

"We need to redefine weeds: 90% of what grows we can eat. Even 'deadly' nightshade is not dangerous. Only the flower is slightly toxic," says Erasmus. "We need to get rid of pretty things and plant useful edibles with companion plants."

Field doctors mentored Erasmus, founder of the award-winning Foliage restaurant in Franschhoek, teaching him about the botanicals found in forests and on mountain slopes.
These include potential immune boosters and edible fungi. 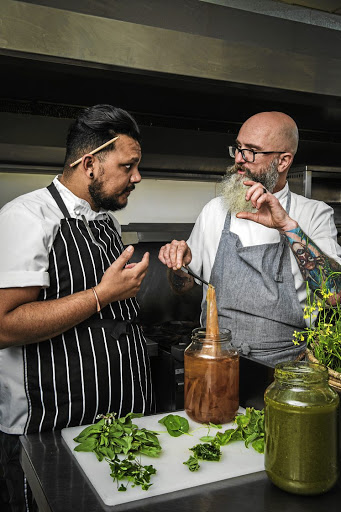 An array of edibles are found in the flower beds of the Queen Victoria Hotel & Manor House garden. Cape gooseberries and wild blueberries are among the fruits, vegetables and herbs behind the roses. Another vegetable and herb garden is thriving in a courtyard on stacked beds on wheels.

Gardener Christine Stevens, who recently returned from abroad, says: "We need to grow our own produce. Every pub is planting or has its own garden in London. In Brooklyn, there is a huge farm on a rooftop."

Stevens - who gets excited about the hundreds of varieties of tomatoes (there are some 2,000 types) - is his muse, says Arendse.

Says Stevens: "Some young chefs come out of chef school and think food comes in boxes. I have met a two-star Michelin chef who did not know how an aubergine grew."

Arendse trained with Erasmus at his restaurant, Ginger. Initially he worked for George Jardine, 2007 SA chef of the year, at Jardine in Bree Street in Cape Town. He moved to Bizerca Bistro - then holding the #1 Bistro title from Eat Out - working with the chef-owner and from there he went on to Salt, Ginger, Kloof Street House and Asoka, before becoming a private chef.

Shaking the sand off wild beach spinach, Arendse says: "You never know what you will find out here."

At Dash, you do know: outstanding food.

• Keeton was a guest of Dash restaurant, Queen Victoria Hotel at the V&A Waterfront in Cape Town.

Meat is now being grown in labs, but it won't solve the world's food problems

Turning insects into food is fairly simple. Here's how it's done

Doing the right thing for the planet while running a successful restaurant is complicated, writes Jackie May
Lifestyle
3 years ago