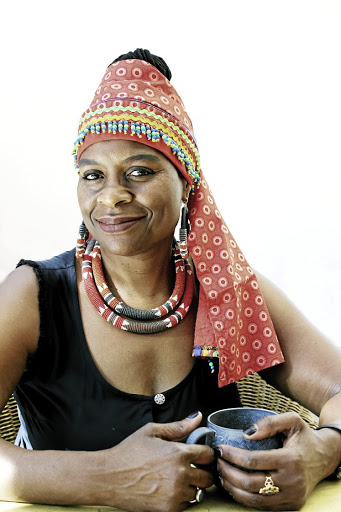 Here lies the ultimate food irony: Portia Mbau, SA chef and author of the newly published The Africa Cookbook - who for 27 years has fed thousands of mostly foreign tourists at her Cape Town restaurant, The Africa Café - first discovered dishes of other African countries in the US.

It was Africa Day at the Oregon university where Mbau was a bursary student. She will never forget the thrill of tasting dishes prepared by other African students from their home countries. In 2020, South Africans are still more likely to have tasted osso bucco than a groundnut stew.

Mbau notes an interesting connection she's made: that Ethiopian food comes from one of two African countries never colonised . "As colonised countries, we're still working through the fact that we believed what we were told; that we're second rate. When it's European, we elevate it; when it's African, we downplay it."

Her book - a collaboration with her daughter Lumai de Smidt - is a vibrant, contemporary celebration of African food, lifestyle and design.

De Smidt, who did the photography and cover design, sees the book - with its easy-to-follow recipes and short ingredient lists - as bridging the gap between cuisines "perceived as new and exotic and an everyday cooking repertoire".

It's also the story of her mother, an often-overlooked restaurant pioneer.

Johannesburg-born Mbau, who mostly grew up in Swaziland, was exposed to different flavours from a young age, with expat ANC activists regularly passing through her family home.

The caterpillars are touted as the South African food that tourists must try.
Lifestyle
2 years ago

Her parents travelled with their children all over SA, eager to expose them to different places and cultures. "It's where I got my itchy feet and explorer's spirit," she says.

After university, Mbau returned to Johannesburg and married Jason de Smidt. The political environment made life difficult for this racially mixed couple, who relocated to Cape Town, where they opened The Africa Café in their small Observatory home. Later, the restaurant moved to Heritage Square in the CBD.

With their own kids, Portia and Jason would take adventurous travel to a new level, road-tripping all over Africa, even canoeing up the Niger River in Mali.

Experiences such as these (and their food discoveries), combined with Portia's family recipes and her interest in healthy eating shaped The Africa Café's evolving menu. Today's 'Communal Feast' takes diners around the continent in 15 dishes - from Africa Café cassava bread to Nigerian suya and Malagasy calamari.

Working with Lumai, a regular on Instagram and Pinterest, has helped cement the book's relevance. "For my generation, things are celebrated in the technological modern world," says Lumai.

A percentage of proceeds from The Africa Cookbook will go to FutureMe, a social enterprise Lumai works with.

My earliest food memory is cheese my mother, Louise, gave me to eat.

My best childhood food memory is of my mom's mango pickle, called achar, a relish that originates in India.

When I was growing up the kitchen was my playground.

I have no formal culinary training and I didn't set out to teach myself to cook. I picked it up organically, absorbing it from people around me.

Returning to SA in 1988 with optimism, I experienced a rude awakening: discrimination was alive and well.

In 1990 I fell in love with Jason, who happened to be white. Although mixed-race romance was no longer taboo in SA it was still tricky.

In 1992 I opened a restaurant (The Africa Café) in Observatory, Cape Town. I'd long been amazed that there were no restaurants in SA that offered local food made with soul.

Princess Mbonambi, head chef at the Scatterlings and Zwipi Underground restaurants, says food has no borders
Lifestyle
2 years ago

Anything that can be found in Ethiopia — from traditional meals to fabrics —can be found in Little Addis in the Johannesburg CBD, say expats
Lifestyle
3 years ago