Five places to find Joburg's best chips: they're hot, crunchy and worth craving

From posh restaurants to affordable roadhouses, there's no shortage of fabulous fried potatoes being served up in the City of Gold 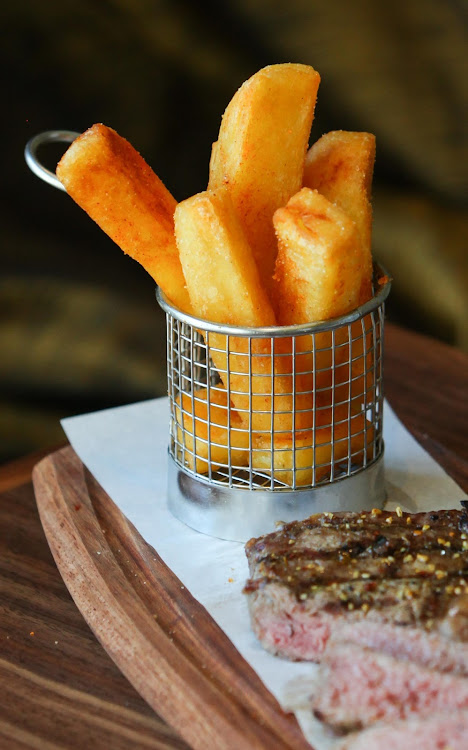 It happened. I finally discovered the perfect chip. It was at a lunch at the launch of a newly refurbished hotel restaurant in my old stomping ground, Rosebank, Joburg.

Dubbed big Bafana chips, they sat perfectly upright, like soldiers, in a metal basket. Long, thick, golden brown and glistening with spice, I couldn't resist lifting one out of the basket, then another and so it went on until they were all gone.

Each one was a thick slab of crispy potato, piping hot and crunchy on the outside, with a fluffy soft centre and tossed in a secret spice. They were sinfully delicious — and some of the best I've tasted.

Though I enjoyed them at the Grill Jichana at Southern Sun Rosebank, big Bafana chips are actually the brainchild of Shaun Munroe, the executive chef of Durban's Southern Sun Elangeni and Maharani beachfront hotels.

The secret to making them? There are many, starting with the best variety of potato for chips, which Munroe found on a Free State farm. Then tender-loving care, from hand cutting to blanching in boiling water then chilling in a blast chiller, blanching in oil to seal them, another chill and, on ordering, their final greasing in hot oil before being tossed in a secret seasoning and served.

I believe the inspiration for chips this good originated with Michelin-star chef Heston Blumenthal. His triple-cooked chips are legendary and were developed in his home kitchen, the first experiment in his long molecular gastronomy journey. His aim was to create a chip with "glass-like crispy crust with a soft, fluffy centre that doesn't become soggy on cooling".

Blumenthal's triple-cooking method works — as proven by the big Bafana chip — and has been adopted by chefs around the world.

Tasting these fabulous fried potatoes inspired me to embark on a culinary quest to find other chips worthy of being crowned some of Joburg's best. Here's where I found them:

REUBEN'S AT THE IVY

Chef Aviv Liebenberg of Reuben Riffel's eatery at the Ivy Villa Hotel and Spa in Sandton just loves chips. He's no slouch when it comes to preparing them either and like Blumenthal favours a triple-cooking method.

"You need a waxy/floury potato for a good chip," says Liebenberg. He hand-cuts the chips, blanches them in boiling water, drains them and cools them in the fridge. The first frying is done in a 140°C oil, where the chips are blanched for 1-2 minutes, which he says "seals them". Just before serving he fries them at 200°C, which gives a good crisp chip that's fluffy inside. 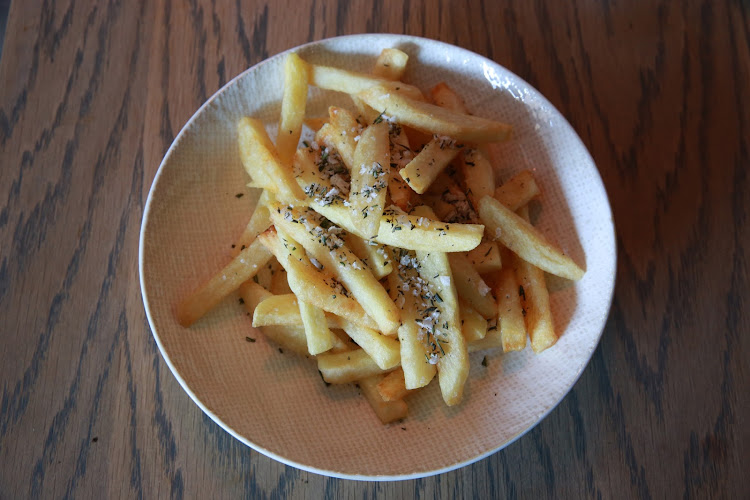 That said, it's the array of different toppings that give Liebenberg's chips their gourmet edge. One is chopped fresh rosemary and flaked salt — local Khoi San salt, he says. Another is an idea he gleaned in Brazil, where they sprinkle crumbly cheese over hot chips; he uses Parmesan.

The last, his favourite, he learnt from chef Richard Carstens: a blend of garlicky aioli , finished off with a drizzle of an Asian mix of soya sauce, chilli, garlic, lemon juice, rice wine vinegar and oil. It works.

A delicious piece of homestyle boerewors cooked over the coals is not complete without a good helping of chips. Chef David Higgs of Marble and Saint restaurant fame shared his favourite combo in his cookbook, Mile 8. 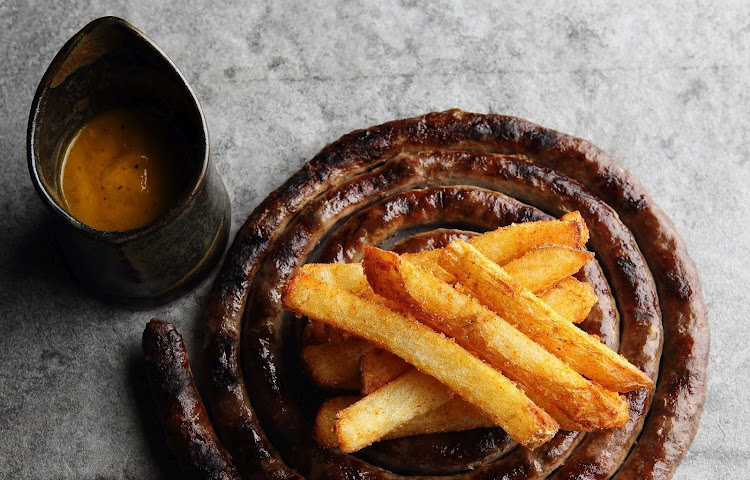 A good chip is all about the Marble spice — a blend of brown sugar, salt, ground paprika and cayenne pepper. The fries are cut, then blanched in hot oil and rested till cold. Just before serving they are fried a second time till crisp and golden brown before being tossed in the spice mix. Yum.

Kota Joe, a trendy roadhouse on the east of Johannesburg, gets the prize for innovation — and huge helpings. From the selection of loaded chips on their menu, you can choose a basketful with cheesy garlic and bacon, crumbed chicken and even mince and smashed avo. Just the thing after a heavy night on the town. 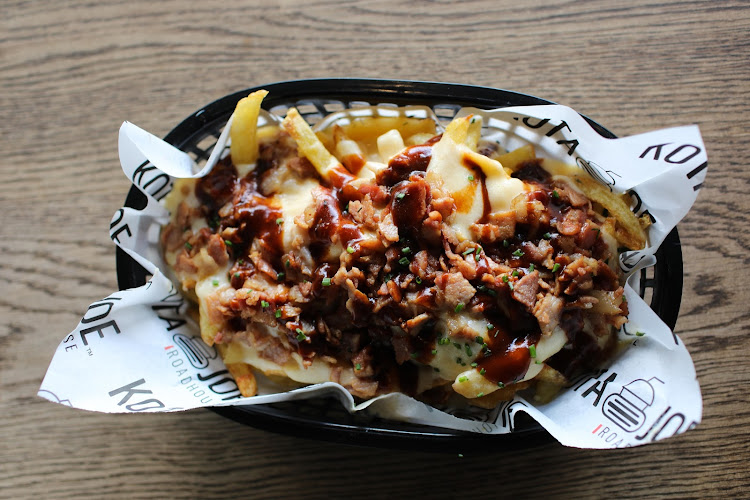 Kota Joe's loaded chips will hit the spot after a night out on the town.
Image: Alaister Russell/The Sunday Times

They're also famous for their kotas, a hollowed out quarter loaf of bread with an array of fillings including their moreish chips. The classic 'Jozi' variety comes with chakalaka, chips, polony, cheese, vienna, Russian, egg and their secret sauce, all for R54.90. It's a whopper!

Established in 1956, Solly's Corner is a fourth-generation family business on a busy corner in Fordsburg. Owner Gadija Akhalwaya says he grew up with "fish in his pockets".

The eatery is full of character, it's just like stepping back into old Joburg, so give yourself time to soak up the ambience and the chat. Akhalwaya and son Mohammed are ready to regale you with their many tales.

Admire the gazillion photographs on the wall before taking a seat in the eating area as you wait for a generous helping of their slap chips, which are doused in salt and vinegar and served with a generous sprinkling of their famous masala spice. Enjoy them topped with crispy battered fish for just R65. It's very good. 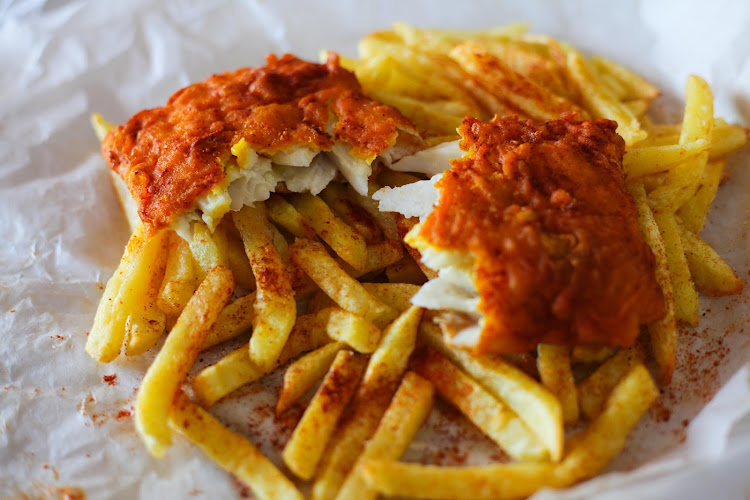 The slap chips at Solly's Corner are doused in salt and vinegar and served with a sprinkling of their famous masala spice.
Image: Alaister Russell/The Sunday Times

The secret to their chips? "The best potatoes on the market." And most important, says Akhalwaya, is "the passion — we don't give a customer something that we wouldn't eat".

He tells me that on a Saturday, their busiest day, they go through 35 pockets of potatoes — and a 120l of "Crispa Gold" oil in a week.

Here's a shortcut for making SA's favourite guilty pleasure - slap chips - at home, plus a quick and easy recipe for a healthier option
Lifestyle
2 years ago

Which supermarket's oven chips came tops in our taste test?

Our taste testers have spoken: here's which retailer's own-brand oven chips are a must for your freezer
Lifestyle
2 years ago

McDonald's & RocoMamas feud over chilli cheese fries, so we tried them & there's a clear winner

Our chowhounds took the ultimate cheese and chilli fries test and the verdict is in.
Lifestyle
2 years ago