Who’d have thought a substance so humble would have hierarchies all of its own? asks Janine Stephen 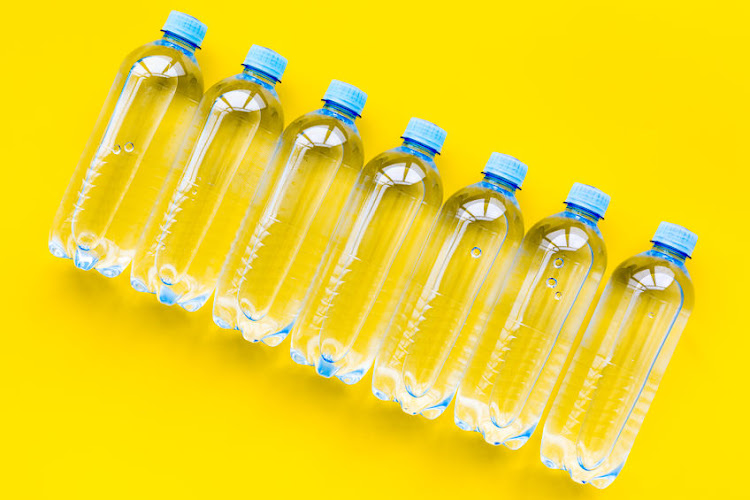 Bottled water is sold more than soda in the US.
Image: 123RF/Oksana Mironova

The year is 2020. It's a late summer morning in the southern hemisphere city of Cape Town, and — ah yes — a young female member of the species Homo sapiens is about to begin her day. She's looking a little out of place in those floral leggings, but don't worry about that now. We are about to witness one of the most startling phenomena of the modern urbanite. It's a behaviour so integrated into this woman's daily life that it is considered entirely normal. And yet, just 30 or so years ago, it was unknown.

She's arrived. In the distance you can see other individuals converging; this is what's known as a "yoga studio". You can see now how the chosen clothing blends into the surroundings. And look: the most powerful male has chosen the central position in the room and is beginning to display.

But this isn't new; what we're interested in right now is what our specimen, and many others here, have carried in with them. The camera's zooming in and we see ... a bottle, yes? And over there a plastic one, and that one, from Yuppiechef, I believe, is a Zoku Insulated Stainless Steel Bottle, just R699 or so.

And they're full, to the brim, of water.

Does drinking lemon water in the mornings do wonders for your health?

We asked a trio of experts
Lifestyle
2 years ago

It has taken only a couple of decades for humankind to completely change its relationship with drinking water, that substance that makes up 60% of its own body weight (babies are 75% water).

As that doyenne of UK popular habits, Caitlin Moran, tweeted recently: "Does anyone remember actually drinking water in the 80s/90s? If you left the house, you couldn't get bottled water back then, and we weren't taking reusable water bottles with us. DID WE EVER DRINK WATER? I don't have a single memory of it."

Responses ranged from yes, with pints of squash, to no, even when playing sport "as it would cause a stitch". PS: Her timeline was challenged by those recalling paying £6 (R123 today) for water at Manumission in 1993.

It's true that in the 1980s the need for portable water holes was rare. Urban humans went about their daily lives relatively unhindered by thoughts of hysterical hydration. Yet our species has developed the unique ability of so altering its surroundings that it can shape (or destroy) preferred environments. Using its unique physiognomy and opposable digits, humans brought water ever closer to where it was needed. Think of aqueducts. In medieval London the rich had pipes, the poor bought buckets. Sound familiar?

By last century, piped water had entered almost every middle-class location, be it school, work or home. Tap water, that miracle of modern hygiene, gushed on demand at the turn of a handle. Hominids drank straight from the tap when the need arose.

Although such behaviour is still recorded, it has changed. A stratum of society has long snubbed this egalitarian resource, preferring, instead, to purchase and drink water with a name, if not a marketing plan.

In 1789 (observe the remarkable record-keeping), a nobleman with liver issues sipped "light and easily drinkable" liquid from a spring in a French town known as Evian-les-Bains. The owner then started selling bottles of the stuff — the early history of Evian, a brand that now introduces its range on its website with the words: "Hydration throughout the day".

In the early 19th century, only those "reduced to the last stage of poverty satisfy[ied] their thirst with water", the BBC tells us. Today, in the US, more bottled water is sold than soda.

Bottled water, then, may originally have been linked to ideas of status; on a hostile planet, securing any advantage is wise, as is clear signalling to potential mates and pack members.

Ms Moran again: "It's a definite evolutionary move: hydrating humans. Now I get PANICKY if I don't have two litres a day."

As mass uptake of bottled water balloons, status marking must become more overt, much as we see in the Birds of Paradise of Papua New Guinea. Language once used for wines is now used by the very expensive water brands: There are water sommeliers, and tastings and talk of source and origin, mouth feel and ancient artesian wells.

Will the tide turn again? Vice reported on the "Raw Water" trend in 2018. Untreated, unsterilised water from springs is sold as truly wild, still full of the minerals nature intended, unlike so-called "processed" bottled or treated water. Depending on the source of the spring, this could be a bit like anti-vaccers rejecting vaccines. One imagines that natural selection will decide the future.

Fact or fiction: do you really need to drink 8 glasses of water per day?

We've all heard we should drink eight glasses of water per day, but where did that advice come from, and is it outdated? We asked five experts to ...
Lifestyle
4 years ago