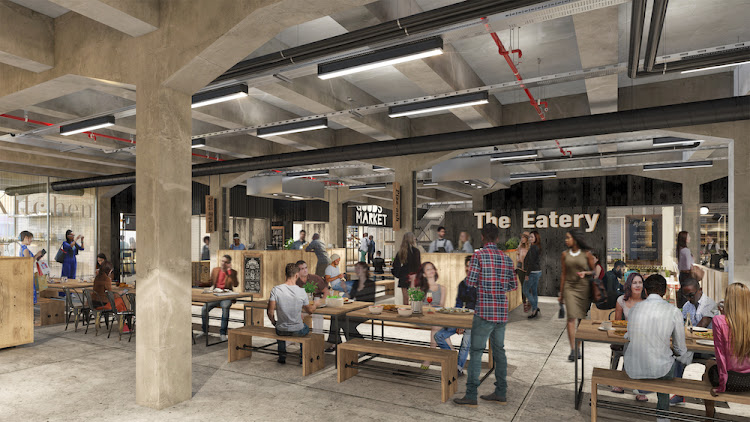 An artist's rendering of what Makers Landing at the V&A Waterfront in Cape Town will look like. Set to open in December, this new food market will double as an 'innovator incubator' for foodpreneurs.
Image: Supplied

As I write this, I’m suffering from an overload of garlic from an over-garlicky bread I enjoyed yesterday and know I have unpleasant breath — luckily I'm working from home and not the office.

Have you ever wondered why garlic is sometimes so super intense that you can smell it on your breath for days afterwards, while other times you can enjoy a garlic-heavy dish without any side effects?

Scientists at Virginia Tech in the US have uncovered the mystery: it’s all down to an oily compound known as allicin, which gives fresh garlic its distinctive flavour and sulphurous odour when crushed or chopped.

And soon garlic growers will be able to measure the strength – the allicin content - of their crops allowing them to be able to cultivate bulbs to a specific potency.

Love garlic, hate peeling it? Four hacks to get the job done quickly and easily

This will allow consumers to choose between buying garlic that's strong enough to keep the vampires at bay, or for those with more timid tastes, that with a more mellow allicin measurement. Science mucking with nature?

Beyond garlic, here’s what else has been making news in the world of food and wine:

Lufefe Nomjana started his food business, Spinach King, in a neighbour’s small kitchenette in 2011. He's since grown it into a healthy eating empire with branches in Khayelitsha and Joburg.

The Spinach King knows his oats when it comes to establishing a business, hence his involvement in an exciting "innovator incubator" project called Makers Landing, which is due to open at Cape Town's V&A Waterfront in December.

More than just another food market, Makers Landing (pictured above) will be a place where foodpreneurs can innovate, learn and grow their businesses within a local food community.

As part of a panel of industry experts, Nomjana’s role will be selecting up-and-coming foodpreneurs to take part in the project. He believes if he was afforded the same opportunities as prospective participants will be, his business would have got to where it is now much faster.

TAKING THE ALCOHOL OUT OF BOOZE

I’m sure I’m not the only one who finds myself eyeing the contents of supermarket wine section while shopping and dreaming of another lifetime when we took buying booze for granted.

Fortunately, many of our favourite brands of beer, wine and coolers now offer alcohol-free alternatives. Those quick of the mark are also opening mocktail bars and even Julian Short, the famed mixologist of Joburg's award-winning bar Sin + Tax, is getting in on the action.

Such is Short’s creative wizardry, and so ingenious is his use of botanical flavourings, that you’d never believe his booze-free creations didn’t contain alcohol.

Find him at the Bryanston Organic & Natural Market, where his liquid refreshments are on sale on Saturday mornings. All I can say is hurry and get there before the booze ban is lifted.

De-alcoholised wine: How do they take the booze out of the bottle?

We asked an expert.
Lifestyle
1 year ago

Three easy ways to give your pineapple beer extra zing

Getting a bit bored with the same old home brew? Try these ideas to literally spice things up
Lifestyle
1 year ago

This innovative new venue aims to offer a unique and entertaining bar experience adapted to the times.
Lifestyle
1 year ago