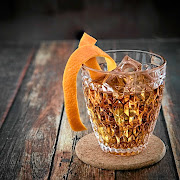 Image: House of Angostura The Old Fashioned is having an international revival.

Bitters, a dark liquid with an amber glow, is an extraction of blended and ground seeds, herbs, bark, roots, flowers, leaves and the fruit of various plants, dissolved in alcohol.

It's a key component in cocktails and other drinks, and a dash of bitters can be added to food to intensify flavours in a dish, too.

For those seeking a little soothing after a hearty meal, it's a great aid to digestion.

The most famous of the bitters is Angostura. It has a rich and colourful history, and today, two centuries later, is still made in Trinidad and exported around the world. Not to be missed, the small bottle wrapped in paper covered with fine black print is a cocktail cabinet essential.

Here's how to use bitters to make two classic drinks, a boozy Old Fashioned and a non-alcoholic Rock Shandy:

Regarded as the oldest cocktail, it is enjoying an international revival. If the thought of heading out to a bar for this classic leaves you cold, it's one of those that can easily be mixed at home.

For one Old Fashioned, take ½ tsp of sugar, 3 dashes of bitters and 1 tsp of water in a balloon glass and mix till sugar has dissolved. Add some large, not crushed, ice cubes and pour over a double tot of bourbon or whiskey. For a burst of citrus, squeeze a strip of orange peel over the drink and serve.

For those who prefer something without alcohol, the dash of bitters gives the feeling you're not missing out.

For one Rock Shandy, in a tall glass pour in ½ a cup of soda or sparkling water and ½ a cup of lemonade. Add a couple of drops of bitters, which will give it a beautiful pinkish hue, add lots of ice and a slice of lemon and voile.