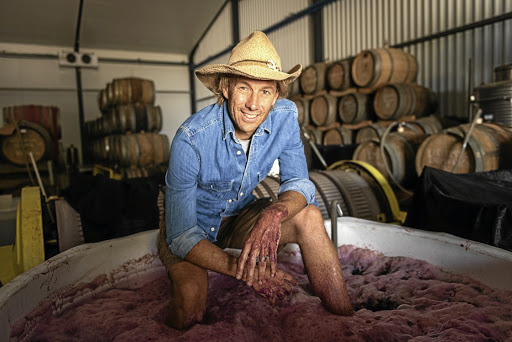 Pieter Walser of Blank Bottle. Two of his wines - Epileptic Inspiration and Familiemoord - will no doubt be conversation starters.
Image: Supplied

Now that the alcohol ban has been lifted and we're allowed to indulge in a bit of wine with dinner, winemaker Pieter Walser of Blank Bottle wants people to say: "Ahh, what is this?" when tasting his wines for the first time. "I want them to ask questions."

He admits that all of his wines contain flaws of some description — but those flaws are often the entry point to telling a compelling story.

"Once you have someone's interest, you can take them on a journey — they handle the bottle, they examine the label, they want to hear the story behind it all, and then go back in for the wine again. I'm intrigued by how the story of a wine unfolds - whether it's an interesting vineyard, a mishap in producing the wine, a serendipitous meeting that leads to a new opportunity, or the unusual way a wine reveals itself in the tasting - there's always something deeper there."

The name of Walser's winery started as a joke — but essentially it's named Blank Bottle because he rejects listing the cultivar on the label, as a way of casting off perceptions associated with style, vintage, area or varietal.

Instead, he opts for eye-catching labels that draw people in and give him the chance to tell his story — via words, or the wine itself. Because of the diverse way he sources grapes - he doesn't own any vineyards - minimal-intervention style of winemaking and the flaws he chooses not to correct, his wines often don't display the characteristics a drinker would expect after hearing what the varietal is or where it was cultivated.

It's unusual for a winemaker to declare that they don't know much about wine — but there's not a lot that's conventional about Walser. "I never had a proper job under a South African winemaker, I didn't know which areas around the world were famous for producing certain wines in specific ways and I certainly didn't have any idea what a 'good' vineyard looked like," he says.

"I went to plenty of wineries and tasted lots of wines — and if I tasted something I liked, I asked the winemaker to take me to the vineyard to show me what it looked like. I slowly started making the connection between the effects of the soil, slope and aspect on developing the taste that had intrigued me, and that's how I learnt."

When he started making wines in the early 2000s, he'd combine his own barrels with leftover barrels bought from other wineries to see what he could come up with, and how the market reacted to the experiment. Those experiments led him to lots of out-of-the-way, neglected and outright strange vineyards that he felt told stories.

He's always designed his own (basic) labels on his computer by playing around with fonts and colours in MS Word because he doesn't have the money to pay a professional designer. A series of off-meds epileptic fits meant he had to turn away from using technology to design the artwork and produce the labels by hand, employing scissors, paint, lino, woodcuts and old paper.

"I hadn't liked anything I'd drawn before I had the fits — and then suddenly I started drawing things I liked. It was an overnight change. I found myself able to translate the story behind the wine, to the label, in new ways".

The label for Epileptic Inspiration incorporates a CAT scan image of his brain after the events that shifted his creative abilities. The rolled-up sock under an exposed pant leg on the label of Nothing to Declare pays tribute to SA's pioneering winemakers who have to smuggle vine cuttings gathered on overseas trips into SA by tying them to their legs and walking through the green zone at customs. 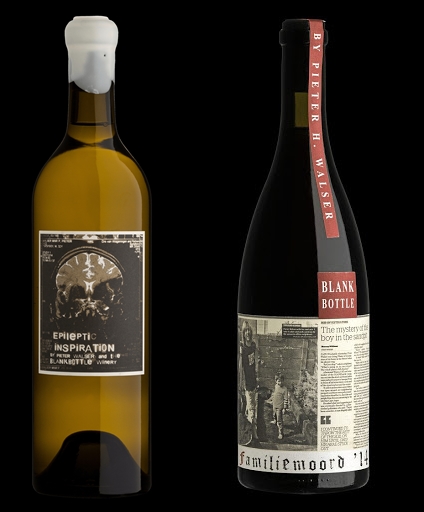 A newspaper cutting from May 11 2013 forms the basis for his Familiemoord (Family Murder) — the extraordinary true story of how the police incorrectly suspected him of killing his young son and burying him in a shallow grave.

Each of the 225 wines in his catalogue has a similar story around its provenance, inspiration, a serendipitous event — or just for fun. He also imports his entire array of bottles - "terrible for my carbon footprint but vital for storytelling" - and uses even the shape and heft of the glass to contribute to the tale of its contents.

A team of workers meticulously seals each bottle with wax and applies tens of thousands of labels by hand, so no two bottles ever look exactly alike.

Walser's experimental bent means he works with 30-40 different varietals in the cellar at a time. Some wines make it into the bottle, others find their way directly from barrel to drain, but Walser and his team still conjure close to 50 different wines each year in a small Somerset West cellar. Blank Bottle produce upwards of 90,000 bottles a year, with production numbers ranging from 10,000 for Moment of Silence to just 300 bottles of Im Hinterhofkabuff.

"We don't make wines for the buyer who goes to the supermarket to pick up some wine for dinner," he says. "Our clients are open-minded people with adventurous hearts who give me their money to let me take them on a wine journey."

Indeed, those adventurous clients include some of the world's top restaurants, including La Trompette, Chiltern Firehouse, Nobu and Oxo Tower, all in London, via long-time distribution partner Swig — also acquired serendipitously via a distribution competition win in the UK. Plenty of his precious product travels to at least 15 other countries around the world.

As to whether his wines are made to enjoy immediately or cellared for a few years, Walser says that depends on what the vineyard delivers. "When we find something great, we just make the wine — sometimes it ages beautifully, sometimes you have to drink it quickly. I don't add things like acids and yeasts - just a bit of sulphur at bottling - so at the end of the day, it's the vineyard that speaks," he says.

"We find that the more the wine is in balance, the better it ages — not by design, in fact the less I interfere, the better they age. Buy good grapes, don't interfere and the balance will come."

As much as he has a framework for the future, rooted in an investment in a team of viticultural consultants and new plantings on farms which show promise, Walser shies away from charting a specific course for Blank Bottle. "I fight hard to not have plans. The moment you have something in mind with a plan too big and a goal too sharp, you miss opportunities".

This philosophy is possibly why Blank Bottle has shown growth in an industry decimated by pandemic lockdowns and prohibitions. Stories became ever more important under lockdown, as people turned to the arts to entertain, inspire and motivate — and few tell better stories than Walser and Blank Bottle.

Lockdown or not, stockpiling wine is always a smart idea, says expert

Even in the absence of a global pandemic, buying wine with the future in mind is a shrewd decision, writes Wade Bales. He shares tips on how to do it ...
Lifestyle
11 months ago

What's cooking this week: Is Bonang's bubbly in tins worth trying?

Our food editor fills you in on the latest in the world of food and wine.
Lifestyle
7 months ago

From alcohol-free sips to 'no kill' meat made from stem cells, here's what we predict will be trending
Lifestyle
5 months ago