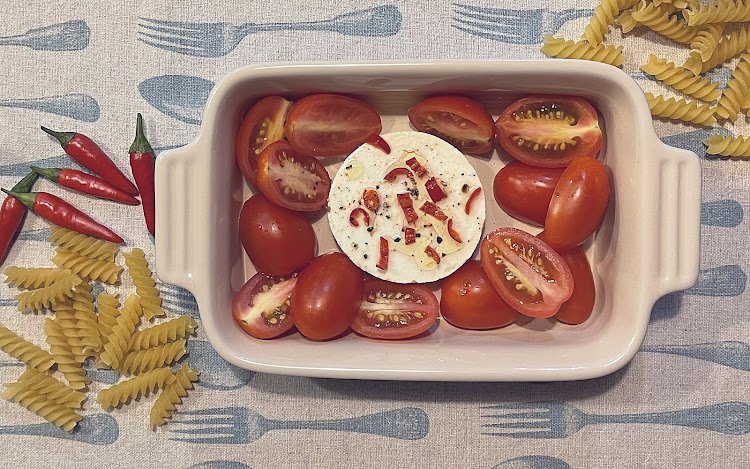 The baked feta pasta that is going viral on social media can be made with a handful of ingredients.
Image: Toni Jaye Singer

When food blogger Jenni Häyrinen started a blog post with the joke “Baked feta pasta! Have you already tried this viral hit pasta? I have. Just this morning when I invented it”, little did she know the recipe would go viral — and not just in her native Finland.

Häyrinen’s #uunifetapasta (#bakedfetapasta) is breaking the internet for the third time in as many years.

While the name “baked feta pasta” conjures up thoughts of a pasta bake akin to macaroni and cheese, the recipe is for a novel pasta sauce starring, yip, you guessed it, baked feta.

Featuring a handful of fresh ingredients, it is quick and easy to make.

An entire block of Greek feta cheese is roasted in the oven together with plump cherry tomatoes, a few cloves of garlic and slivers of chilli for fragrance and fieriness and, in Häyrinen’s words, “way too much olive oil”. (Click here for the exact quantities.)

Once the feta is melting and the cherry tomatoes start to burst, you break up the cheese and mix everything together. All that’s left to do is toss though pre-cooked pasta and freshly torn basil leaves and dinner is done. Sounds scrumptious, doesn’t it?

The Finns clearly thought so. Häyrinen writes on her website that when she published the original Finnish recipe in 2019, the country’s feta cheese sales skyrocketed by 300% and supermarkets started to run out of the ingredients needed to make it.

TikTok has caught on and it is happening again with videos showing how to make the dish — or variations thereof — flooding social media feeds and making mouths water all over the world.

As someone who loves pasta so much I married an Italian, I didn’t need much prompting to give Häyrinen’s recipe a go.

I had most of the ingredients on hand except for the cherry tomatoes, and had to try  three different supermarkets to find them. A coincidence or is #uunifetapasta taking off in SA?

Assembling the dish was as ridiculously easy as it looked in the #bakedfetapasta videos I had seen on social media.

As someone who tends to use very little added fat when cooking, I did wince when I saw the amount of olive oil required: half a cup of the stuff felt a bit excessive — and yes, I know that it is a healthy monounsaturated fat, but my hips don’t.

Judging from one of Häyrinen’s Instagram Live videos, I’m not the only person who seemed to think so. That said, she explained that lots of oil was needed to stop the tomatoes from drying out, so into the dish it went.

One of the pros of this recipe is that it took roughly the same amount of time to bake the sauce as it did to cook my pasta al dente, making it a quick and convenient dinner option.

The end result was delicious. The zing of the chilli — I used particularly hot ones — helped to cut through some of the richness of the creamy, salty melted feta. Though tender, the cherry tomatoes still retained their shape, adding some welcome texture to the dish, and I particularly enjoyed the slight char these had developed after roasting in the oven.

Overall, I did find the pasta a tad oily for my liking, as did my husband, so next time I’d use less oil.

And yes, it is worth making a second time — provided I can get my hands on more cherry tomatoes.

Dalgona coffee is trending: here's how to make this upside-down cappuccino

The global search giant has released the results of its 2020 Year in Search report.
Lifestyle
1 year ago

Craving carbs? Three yummy pasta bakes to warm you on a wet day

Try our easy recipes for a scrumptious tuna lasagne, crowd-pleasing mince and cheese pasta bake and a novel chicken and pasta pie
Lifestyle
1 year ago