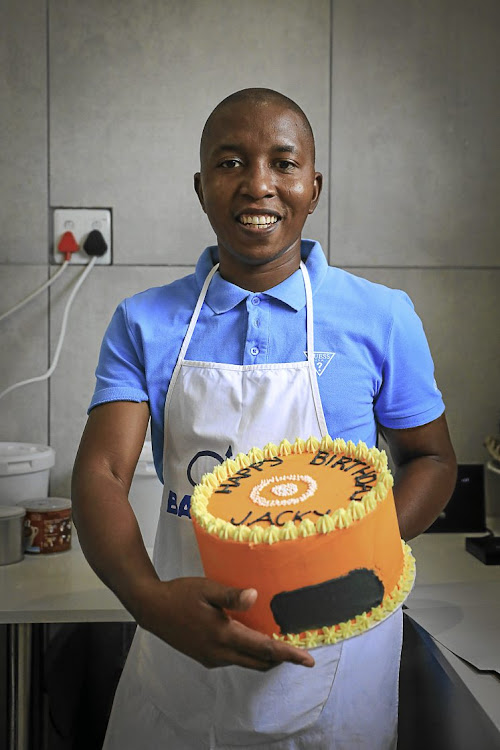 Davy Tsopo at workin his kitchen at home, perfecting cakes that sell for between R100 and R600.
Image: Sebabatso Mosamo

A borrowed  Wi-Fi password, online baking tutorials, donated utensils and a diabetic friend who ordered a cake just to kickstart his business are what took Davy Tsopo from retrenched restaurant cleaner to aspiring cake boss in less than a year.

Tsopo, who runs Cakey by Davy from the tiny kitchen of his Linden, Johannesburg, flat, believes the Covid-19 pandemic and the national lockdown forced him to start paving a path to a better life.

By day Tsopo, 36, is a stay-at-home dad, caring for his toddler Travis while his wife Tatenda works.

At night he transforms into “bakerman”, spending hours concocting his cakes, popping out an average of six daily, which his customers collect from his home.

Next month the self-taught baker will start baking school to formally learn the intricacies that will help him realise his dream of owning a car and opening his own bakery and coffee shop.

Tsopo, who was employed at a restaurant for nearly four years and worked at an events company before that, knew nothing of beating, folding and sifting until he became jobless in March last year when he was let go.

“Travis was just one month old and my wife was on maternity leave, receiving half her salary. I was so stressed,” he says.

His neighbour shared his  Wi-Fi password to allow Tsopo to watch humorous videos to ease his worries. “When I became tired of those videos I started watching Cake Boss and was curious whether those cakes were real. I developed a love for [the] shows, watching up to four hours a day.”

Tsopo was so inspired that he wanted to learn how to bake, gaining basic knowledge from tutorials on YouTube.

“I was in a family of boys. I used to love cooking simple meals but baking is not something that I tried. Baking came from nowhere for me.”

A month after his retrenchment Tsopo baked for the first time in his life — a batch of vanilla muffins.

“It was good, I won’t lie. I decided to give it a go. I posted on my WhatsApp status that I lost my job and was selling muffins at R60 a dozen to take care of my wife and child.”

Tsopo’s friend then asked him to bake her a chocolate cake, for which she paid R250.

“She doesn’t eat sweet things because she is diabetic but she ordered it to help me get this business going. She posted that cake on her Instagram and tagged me with my details.”

That gesture changed Tsopo’s life and Cakey by Davy was born.

“All my baking tins I got from my neighbours. People started coming in numbers, even bringing baby clothes. At first I was nervous, I was making mistakes. Sometimes I would bake a cake without baking powder and it would be like rubber.”

But he persevered and word of his baking grew. “Due to our financial situation my wife had to go back to work after two months. I had to care for my son and take orders to keep the business going. I started baking at night until 2am or 3am, it was a challenge.”

He charges between R100 and R600 a cake, depending on the size and design.

A baking-ingredient supply company learnt about him and offered to sponsor him with ingredients for a year.

“I have grown so much in these past months.  Not because I’m so good, but because of the support I’m getting from friends and neighbours. There was so much fear about the pandemic but it changed my life. Now I’m doing my thing, I’m very happy.”

Tsopo’s friend, Charlotte Kanter, says she ordered from him because she was impressed by his initiative.

“I knew that he had no work and was so impressed that he took the initiative to sell a product rather than ask for handouts. I was so impressed by how beautiful and delicious the cake was. I posted a picture to my Instagram, letting people know how they could support Davy and order their own cakes.

“A lot of my friends knew Davy from his time as a cleaner. Due to the fact that he has always been the nicest, sweetest, most positive person, they wanted to support Davy and began ordering their own cakes.”

When Gary Lotter’s safari travel company ground to a halt due to Covid-19 and the country entered lockdown, like many of us he started spending more ...
Lifestyle
10 months ago

Sanet Oberholzer heads to Fourways in Joburg to catch a flick and sample a shake.
Lifestyle
9 months ago