This captivating Netflix series is as emotive as it is informative 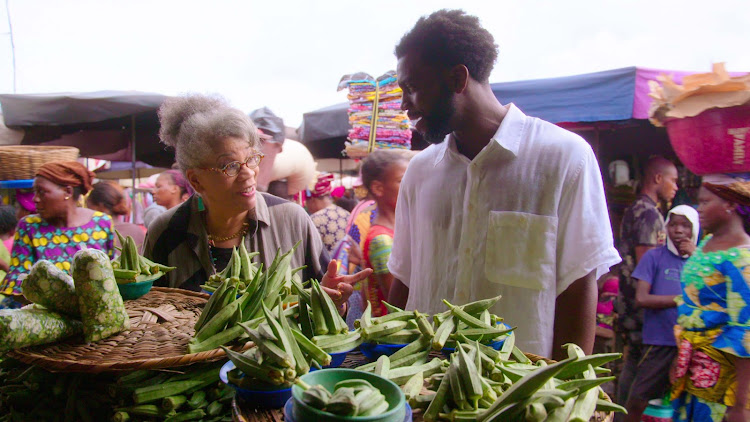 'High on the Hog' presenter Stephen Satterfield talks okra with author Jessica B Harris in a market in Benin, West Africa.
Image: Netflix

Foodie or no foodie you will be deeply moved by Netflix’s new four-part doccie series High on the Hog, which sees presenter Stephen Satterfield follow in the footsteps of his forefathers as he explores how ingredients rooted in Africa became the bedrock of African American food culture.

Satterfield, an American chef, food writer and sommelier, starts his journey in Benin with culinary historian Jessica B Harris, on whose book of the same name the series is based.

The size of this small west African country belies its importance in history as one of the busiest ports of the transatlantic slave trade. It’s here that we discover that staples of Southern cuisine like yams (sweet potatoes) and okra — that famously slimy green vegetable — are not American originals as widely thought, but African.

WATCH | The trailer for 'High on the Hog: How African American Cuisine Transformed America'

There’s so much knowledge that Satterfield and his guests bring to the table. I was fascinated to discover that the “Son of a Gun” stew made famous in cowboy movies can trace its origins to the very first cowboys in the 1800s, who were enslaved black men well known for their talents as cattle herders, and to learn how one man, a freed slave, went about establishing the oyster culture in New York.

It’s a captivating series and one that reminds you that food is the common thread woven into all of our stories; it has a way of defining who we are and where we come from.

• 'High on the Hog: How African American Cuisine Transformed America' is streaming on Netflix.

Macaroni and cheese is such a popular comfort food that many nations regard it as their own - even if the recipe varies slightly from place to place, ...
Lifestyle
2 years ago

When chef Siya Kobo lost his fine-dining restaurant due to lockdown, he didn't give up. Instead he teamed up with the JHB Culinary & Pastry School
Lifestyle
11 months ago