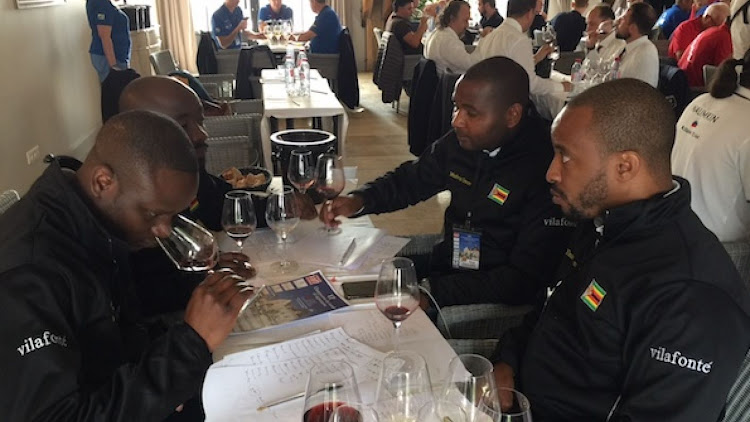 The Zimbabwean-born refugees have defied the odds and taken their seats at the table of some of the world’s top wine tasters.

The journey is recorded in Blind Ambition, a documentary film chronicling the perilous journey of the refugees from when they made their way to SA in search of a better life.

Nyamudoka, Dhafana, Gwese and Taguzu arrived in South Africa separately and started working menial jobs in the hospitality industry. In 2017 the four men, bound by their love and passion for the wine industry, formed Zimbabwe’s first Wine Tasting Olympics team and competed in the World Blind Wine Tasting Championship in France, the Olympics of the wine world.

Nyamudoka, 35, a winemaker based in Johannesburg  who has a wine brand Kumusha Wines,left Zimbabwe in 2008 “with one change of clothes and a backpack full of certificates”.

“As someone who  started right at the bottom working as a waiter, I feel honoured to be part of the documentary film. I didn’t have any prior background in wine but I was eager to learn. I enrolled at a wine academy and trained as a sommelier, eventually training in wine business management.

It’s a journey of  perseverance and dedication from being a mere gardener and eventually training to be sommelier, and finally having my own wine brand, Mosi Wines

“My journey has been both challenging and rewarding as an immigrant coming to SA. My story is one of many thousands among immigrants risking everything for a better life, and I am fortunate my story gets to be told,” Nyamudoka told TimesLIVE.

Hundreds of undocumented Zimbabwean nationals cross the border into SA daily and for Dhafana, 39, this was the only way he could change his life for the better. He left Zimbabwe in 2008, crossing the border on foot and arriving in SA as an economic refugee.

“I started working as gardener. Then I got a job as  a bartender at a restaurant in Cape Town, tasting my first glass of wine at the age of 29. It’s a journey of  perseverance and dedication from being a mere gardener and eventually training to be sommelier, and finally having my own wine brand, Mosi Wines. The documentary film feels like a full circle,” said Dhafana.

The journey from being waiter to becoming SA’s top sommelier has been a life-changing experience for Gwese, 34.

“I wasn’t exposed to wine in Zimbabwe and never imagined that one day I would be travelling the world as a sommelier and featuring in a documentary. With hard work and commitment, it made so many things possible.” said Gwese.

The documentary film is the story of winning against all odds, and for Taguzu, 33, the transition of leaving Zimbabwe for SA and now based in the Netherlands is a testament.

“Like most people I left Zimbabwe when things were really bad economically. I arrived in SA in 2012 but I couldn’t find a job. I settled for a menial job as a runner in a restaurant. I was curious and filled with a desire to learn about wine, so I trained. Among my proud moments, apart from being the documentary, is when I was named SA’s best young sommelier,” Taguzu said.

Blind Ambition is co-directed by Rob Coe and Warwick Ross and is premiered at the 2021 Tribeca Film Festival in New York.

SA craft wines that deserve a place at the high table

From ‘narrative luxury’ to a sense of deluxe, you don’t get more luxurious than these statement offerings
Lifestyle
1 month ago

Loss of taste, smell due to Covid is proving a challenge for wine tasters, union wants them to be priority group for vaccine
World
3 months ago

Each month, the meal kit delivery service will be partnering with a different local wine estate
Lifestyle
3 months ago