What the hake?! Woolies’ fish sausages leave social media users with many questions 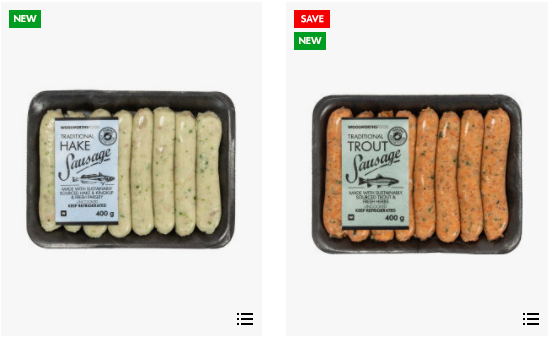 It can’t be that bad, right?

According to Woolworths, the fish sausage was prompted by a growing demand for meat alternatives.

They are made with alginate casing and are suitable for pescatarians. Fresh herbs and flavours such as fresh lemon, garlic and parsley are added to all the sausages.

“We have seen a growing number of consumers eating seafood, and it will continue to become more pronounced in the years to come as consumers are actively making healthier choices for themselves and the planet,” Woolworths said.

The new product range drew mixed reactions on social media, with some giving it a thumbs up while others called for the year to end because they had now seen it all.

This has to be the most Woolworths thing I've ever seen. "Traditional" hake sausage. 😂😂🤷🏿‍♂️🤷🏿‍♂️ It's basically fish fingers that went to Bishops. pic.twitter.com/t195C4qWp6

So basically long fish fingers without the crumbs bit then 🤔🤔🤔

2021 needs to end. Woolies just came out with Hake sausage.

I’ve just had to cook more sausages cause we finished 3 each and wanted more 😳 the structure is a bit fragile, the casings broke up a little while frying. But the flavour and texture is legit delicious! pic.twitter.com/RnTgsePpiQ

I bought that fish wors from Woolies😅cant wait

As someone who has eaten fish fingers before, I can't draw the line at fish wors.

If I taste fish when I bite into my wors, everyone catching hands🙂 https://t.co/pONQLrhCgs

SA’s Michelin-star chef is on a mission to encourage people to eat more game. He share his tips for cooking it
Lifestyle
2 weeks ago

By not chickening out, this ‘little guy’ has beaten the pandemic coop

South Africans' favourite lunchtime grub is a braai, a global survey has revealed.
News
1 month ago

'Nobody should drink wine from a box': Mzansi split over Woolies selling premium wine in 2-litre boxes

Premium and box wine in the same sentence?
Lifestyle
1 year ago