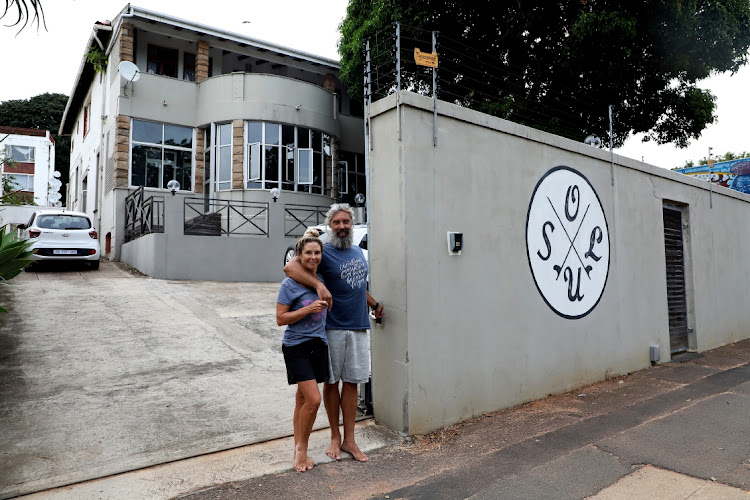 Soulhouse, a Durban self-catering guest lodge, received a letter from Golden Fried Chicken, trading as Chicken Licken, demanding that it 'immediately desist' from all use of the trademark 'soul'.
Image: Sandile Ndlovu

Chicken Licken is clucking mad over a Durban lodge using the word “soul” in its name.

Soulhouse, a self-catering guest lodge for surfers, received a letter on February 16 from Golden Fried Chicken, trading as Chicken Licken, demanding that it “immediately desist” from all use of the trademark “soul”.

“If you stop promptly and give an undertaking, our client will, entirely without prejudice to its formal rights, not take formal action. Obviously, if you will not stop promptly, our client reserves its rights to take whatever steps it deems necessary — including high court proceedings,” the fast-food chain’s lawyer, Ron Wheeldon, wrote in the letter.

Chicken Licken gave the owners until February 18 to pull the word from the name of the lodge.

On February 24, Soulhouse’s lawyer responded that the owners would not remove the name as Chicken Licken’s trademark covers only food and Soulhouse does not serve food.

Natasha Whittaker of Soulhouse said they had not heard back from Wheeldon.

“We are hoping that Chicken Licken will be reasonable and logical in their response. Their trademark doesn’t stand with regards to the name Soulhouse. We hope they will be at peace with the fact that we are by no means in opposition to them. We trust that they’ll see that there is absolutely no reason to pursue this ridiculous action any further.

“We are a small entity. We wouldn’t survive the litigation and, quite frankly, if they pursue this course of action it would be outright bullying,” she said.

Whittaker, whose boyfriend owns Soulhouse, said they were “dumbfounded” by the action.

But Wheeldon told the Sunday Times this week the lodge owners had advertised a cafe on their website.

“As a matter of public record, our client is the proprietor of (among others) the trade mark registration SOUL for the following specification of services: restaurants, snack bars, cafes, fast-food outlets, canteens and roadhouses connected with the sale and distribution of foodstuffs and refreshments; catering.”

He said this gives the owner the exclusive right to use that trade mark in respect of the goods or services for which it is registered.

“In this case the actual trademark being used is SOUL, expressed in a logo with crossed surfboards, as well as Soulhouse. Neither version is a registered trademark of that business. The indication is that it was either being used, or about to be used, as a trademark for a cafe. When that was detected, we sent a letter setting out our client’s rights and inviting the trader not to use such a trademark on those services.”

He said they were told that the reference to a cafe was a mistake as there is no such cafe and that the website would be corrected.

Whittaker said the website was being amended and there was no intention in the future of operating a cafe or catering as “we are a guest house”.

Chicken Licken, with about 250 outlets in SA, has gone to court before in attempts to enforce its “Soul Food” and “Soul” trademarks and lost on both occasions.

In a 2019 fight in the Durban high court with Oh My Soul Café, a vegan restaurant, judge Dhaya Pillay said: “In the spirit of ubuntu, Chicken Licken should encourage rather than restrain the use of ‘soul’ to mend our social fractures and fissures.

In 2020, it lost a similar case in the Johannesburg high court after suing Soul Souvlaki, which sells Greek street food from several locations in Gauteng.

In July 2021 Wheeldon wrote to a Plettenberg Bay restaurant East Coast Soul Kitchen demanding that it change its name.

The restaurant changed its name to Sol Kitchen.