Warm up with a hale and hearty homemade goulash

Based on the original Hungarian dish, a goulash can be a soup or a stew and sure can chase away those wintertime, loadshedding blues 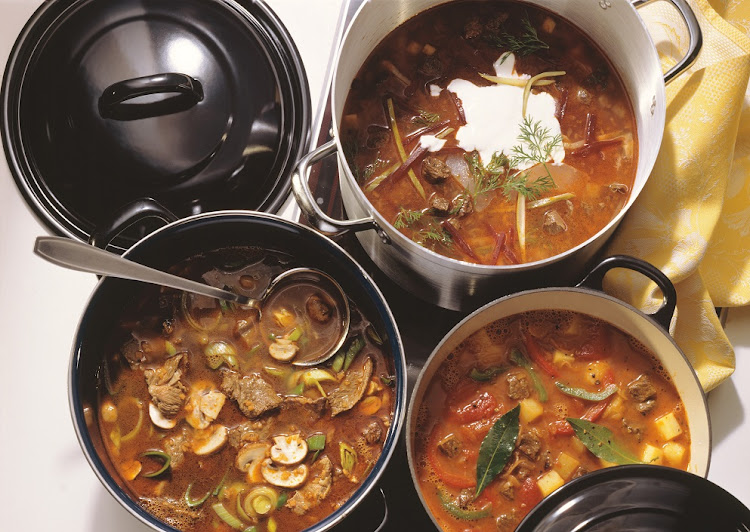 Waking up recently to the cold weather, with splashes of rain in between patches of  pasty sun,  I knew it was time to haul down the big cauldron and make a hearty goulash soup.

Rich in colour, thanks to terracotta-red paprika,  the original Hungarian goulash has probably been made in kitchens around the globe because the combination of ingredients makes such a good dish. Some recipes use up to half a cup of Hungarian paprika, which isn't spicy, but, like pizza, the original has been masqueraded about the world and there are many forgettable watery interpretations passed off as goulash.

A goulash can be a soup or a stew and according to Larousse Gastronomique, the gospel on food, the word comes from the name gulyas, given to  nomadic herdsmen  who grazed their oxen in the Hungarian countryside.

Their sustenance, which was prepared  before they ventured out, was meat cut into cubes, cooked with onion in a heavy pot and then stewed until all the liquid evaporated. It was then left to dry in the sun before being stored in a bag made from a sheep’s stomach. This was taken out into the field to reheat over a fire by adding water and bringing it back to the boil.

RECIPES | This hearty, filling goulash soup can be meaty or vegetarian

A  bowl of homemade goulash soup can do a lot to chase away the winter blues, writes Hilary Biller.
Lifestyle
1 week ago

One of the joys of this tasty soup is that it is so easy to make. It also  cooks easily - even over a portable gas flame during a power outage. The heartiness of the soup comes from the beef, usually a forequarter cut that benefits from long, slow cooking. Beef innards or offal can also be used.

The original goulash has a either a green pepper or a red pepper, sometimes both, and although the many recipes I referenced don’t add carrot,  I think it brings a lovely sweetness.

The Hungarian original is made with lard or bacon, which gives it its  smoky flavour,  and only features two spices — the requisite paprika and caraway, a dried seed not commonly used in South African cooking.  Purists will complete the soup with a dash of sour cream and fronds of fennel. Finish it off with warm bread or steamed dumpling for a complete meal.

For vegetarians,  this soup can be just as hale and hearty without the beef.

RECIPE | The key to good, hearty oxtail stew — and eight ways to mix it up

Hale and hearty succulent oxtail slow cooked in a rich gravy is the best antidote to chilly weather. Hilary Biller shares her favourite recipe with ...
Lifestyle
1 month ago

Serve and save: family meal recipes that cost just under R100

SURVIVING THE CRUNCH: These dishes are not only hearty and filling but also easy on the pocket
News
2 months ago

Cold-weather cooking: Our three most popular recipes for warming dishes

This budget-friendly boerewors stew, trendy pizza chicken tray bake and creamy mussel soup have been a real hit with our readers.
Lifestyle
1 year ago